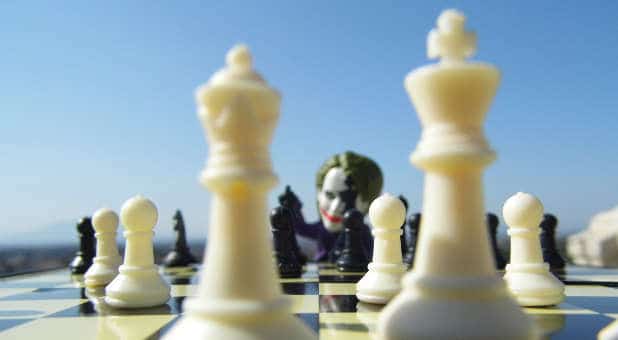 Some time ago, I pointed out a deadly deception in the prophetic movement. I sounded the alarm in hopes of stemming the tide of this erroneous theology, but I see it rising more rapidly now than ever. Its proponents are defending it vehemently and rebuking those who disagree. I’m grieved.

Let’s be clear: If you ignore the devil, the warfare doesn’t stop. If you focus solely on Jesus, it does not make you immune from warfare. That violates Scripture on multiple levels. I talk more about this in my book, Waging Prophetic Warfare: Effective Prayer Strategies to Defeat the Enemy.

Yes, we should absolutely be more God-focused than demon-focused. However, if Paul the apostle—a man with deep intimacy with God who received two-thirds of the Bible through direct revelation and prayed in tongues more than anyone—wrestled principalities and powers, who are we to think ignoring this reality will stop demonic attacks?

We Don’t Have to War?

The “we don’t have to war” doctrine rising in this hour is dangerous at best. Indeed, I believe it’s one of the devil’s greatest deceptions to convince you to lay your weapons down. Make no mistake, there is no ceasefire in the spirit. You cannot lay your weapons down and think for a moment the devil will not see it as an opportune time to go in for the kill.

Yes, Christ has all authority. He spoiled the principalities and powers and made a show of them openly, triumphing over them in it (Col. 2:15). But we still have to take authority over the devil. The apostles Paul, Peter and James all spoke of the need for spiritual warfare. Were they hyper-focused on the devil? Hardly.

Beloved, don’t fall for this dangerous “we don’t have to war” theology. Consider these 10 scriptural truths that will set you free from the heresy that’s spreading like a fast-growth cancer across the body. Mind you, these aren’t the only proofs against this false doctrine.

The demonic hierarchy: Paul told us succinctly that “we wrestle not against flesh and blood, but against principalities, against powers, against the rulers of the darkness of this world, against spiritual wickedness in high places” (Eph. 6:12) Why does Paul paint such a descriptive picture and offer a hierarchy of demonic forces we have to wrestle if we didn’t have a role to play in spiritual warfare?

Be a good soldier: Paul tells his spiritual son Timothy to be a good soldier (2 Tim. 2:3) and to war a good warfare (1 Tim. 1:18). Why would he give that advice if Timothy wasn’t in a war with an unseen enemy?

Beware the devil’s snare: Paul also told us not to give place to the devil (Eph. 4:27) and warned about the snare of the devil (1 Tim. 3:7; 2 Tim. 2:26). Why would he offer these admonitions if they weren’t warranted? The enemy is real and he wants to rob your miracle from you. You are indeed in a war.

Resisting the wicked one: Then, we have James, who told us to submit ourselves to God, resist the devil and he will flee (James 4:7).

Remember the roaring lion: Peter, who warned us to be sober and vigilant, because “our adversary the devil, as a roaring lion, walketh about seeking whom he may devour” (1 Pet. 5:8-9, KJV). Peter told us to resist him, standing firm in the faith.

Should we ignore all these warnings and instructions? God forbid.

All of these Scriptures suggest that the devil is still wreaking havoc on the earth. Havoc on the earth—sickness, disease, murders, immorality and the like—is not God’s will. Jesus spoiled the principalities and powers. But the word “spoiled” doesn’t mean neutered and made powerless. Jesus plundered the kingdom of darkness. The kingdom of darkness and all the principalities and powers that call it home, lost authority over the born-again believer. But we still have to enforce the kingdom rule of law on Earth.

For just $10 per month you can bring the gospel to 1,000 homes. Join us as media missionaries! GIVE NOW
VIEW COMMENTS
« BDS South Africa Deletes Tweet about Ties with PFLP, but Caught by Israeli Org Take The Low Road. It Has Much Less Traffic »