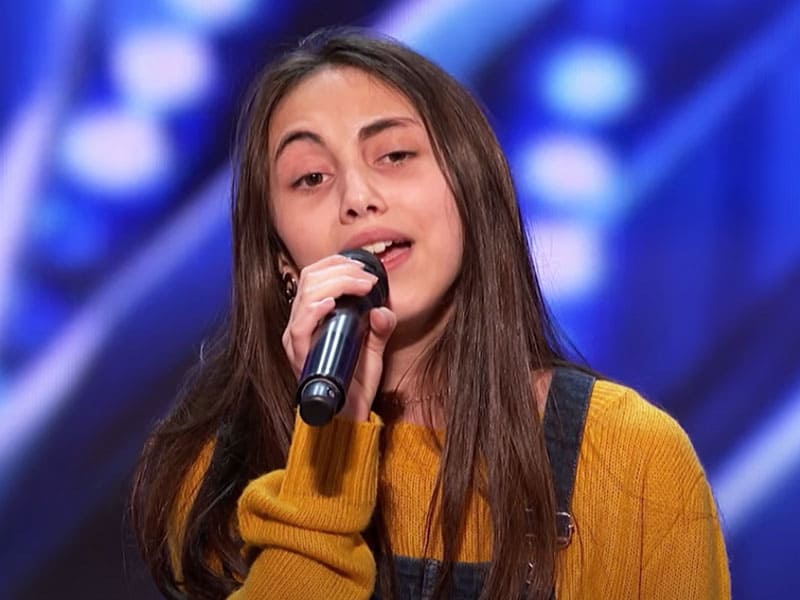 A 12-year-old contender of America’s Got Talent Season 15 stunned the judges with her original song after given the chance to come back when her first two songs were rejected.

In a recent episode of NBC’s 15th Season of America’s Got Talent, Ashley Marina blew the crowd away. The 12-year-old girl from Pittsburgh, Pennsylvania sang her original song “You’ll Always Be My Hero.”

Initially, Ashley sang Martian McBride’s “Anyway” but Simon Cowell didn’t let her finish the song. Instead, he suggested for her to sing another song acknowledging she’s got a good voice but not the right song. Also, Simon requested that she sing it in acapella so they could hear her voice clearly. However, when she started to sing the first lines of the song “Opportunity,” Simon stopped her again.

Judge Simon then blatantly told her that she brought the wrong songs to the AGT stage. He rejected her twice but gave her a second chance when Sofia Vergara suggested it. And all the judges agreed to give her time to find the right song for her voice.

Later on, Ashley came back onstage bringing with her an original song entitled “You’ll Always Be My Hero.” It was a song she amazingly composed for her dad whom she describes as someone who “has always been there” for her.

Apparently, the young lady resorted to her own composition since she wasn’t comfortable trying out other songs to perform on AGT. Her comeback performance then stunned the crowd and judges Howie Mandel, Sofia Vergara, and Simon Cowell.

In the end, the 12-year-old young lady got a “Yes” from each judge, sending her to the next round.

According to Ashley Marina’s personal website, she is a multifaceted talent. Even before she went on AGT’s big stage, she has had already quite a few achievements under her belt. She was named 2020 MÓB Radio Artist of the Year, TalentWatch Dream Night Champion, National Talent America Tri-Star Award Winner, and Williams SING-OFF Finalist (twice).

ALSO READ: 5 Christian Movies You Can Watch And Enjoy Released This Summer, Fall 2020