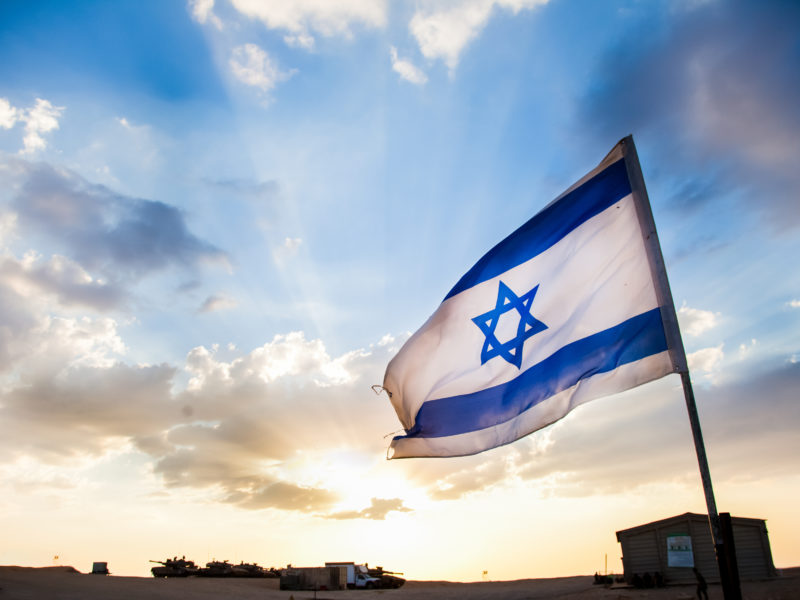 140 Olim (immigrants) from France arrived in Israel on Monday and were welcomed at Ben Gurion Airport by Israeli Minister of Immigration and Absorption Pnina Tamano-Shata and President of the International Fellowship of Christians and Jews (IFCJ) Yael Eckstein, whose organization arranged for the flight.

Nearly half of the Olim, 60, are children under the age of 18. 11 of the Olim are medical and paramedical professionals. 17 have careers in high-tech while 27 have experience in liberal arts professions.

Several days before her flight with her husband and three children, Barbara Simha Bohadana shared from Paris that she was fired because she was Jewish.

“A pharmacy manager, who I worked for as a pharmacist, did not even try to hide the reason for my dismissal. He just told me that a wig or any other sign of my Jewishness was not acceptable and that if I did not have them removed, I should just get up and leave. So I got up and left,” she said.

She added that her husband, Dan, an anesthesiologist, had a hard time finding a job because of his Jewish background.

“We have always been Zionists and we knew we would make Aliyah. I am so happy that we are moving to Israel and that we will never have to go through such experiences again,” she said.

41-year-old Lionel Giuili, who made Aliyah with his wife Stephanie and their three children, said that his parents live in Israel, as well as his sister and a lot of other family members.

“We always knew we would make Aliyah. We were always connected to Israel and maintained Jewish tradition. However, the Hypercacher Kosher Supermarket Siege was the straw that broke the camel’s back, and we finally decided to make Aliyah,” he shared.

The January 2015 Islamic attack on the Hypercacher market in Paris ended with the murder of four Jews.

Although Lionel and his family did not suffer any physical violence, the plague of anti-Semitism has had a direct impact on every member of the Jewish community.

“If, for example, while I was sitting and eating in my store and I heard someone enter the store, I automatically took off my kippah. Neither I nor my children walked around the street with Jewish symbols,” he recounted.

In January 2020, a survey by the American Jewish Committee (AJC) found that a staggering 70% of French Jews say they have been victims of anti-Semitism, 59% suffered physical abuse in school and 46% suffered verbal abuse at work.

Attempting to avoid anti-Semitic attacks, more than a third of French Jews refrain from wearing Jewish symbols in public, and a quarter avoids revealing their Jewish identity at work, and 40% avoid arriving at certain areas to circumvent attacks.

Lionel had visited his family in Israel quite often before making Aliyah. “I always felt at home in Israel. I feel free in Israel, and I no longer have to hide my Jewish identity. This reflex I developed that made me take my kippah off and put it in my pocket will no longer be necessary as I will be living in Israel,” he celebrated.

Moving to Israel during the Coronavirus (COVID-19) pandemic has not scared his family.

“We are aware of the situation in Israel. Israel as a whole has coped well with the situation, especially in the first wave, when France was facing a shortage of masks,” he said.

Minister of Immigration and Absorption, Pnina Tamano-Shata stated that in 2020, Israel will welcome over 10,000 Olim from all over the world.

“The Jews of Europe and the rest of the world are currently facing complex challenges, and every Jew should know that the gates of this country are still open, even during an emergency or crisis,” she said.

There are 50,000 Jews in France who can emigrate to Israel in the immediate time and another half a million in the long term, the World Zionist Organization estimates.

Between the years 2000 and 2017, 10% of the French Jewish community, the largest in Europe, immigrated to Israel.

In general, Israel is expecting a quarter of a million Olim (immigrants) in the next 3-5 years, Jewish Agency Chairman Isaac Herzog told the Knesset’s Immigration and Absorption Committee this month, a wave of immigration following the global Coronavirus (COVID-19) crisis.

Read also: Christian Parliamentarians from Around the World: We Support Israeli Sovereignty in Judea and Samaria

For just $100 per month you can bring the gospel to 10,000 homes. Join us as media missionaries! GIVE NOW
VIEW COMMENTS
« After 15 Years, Bill Submitted to Repeal Disengagement from Northern Samaria Presumption: One Surefire Way To Lose In Spiritual Warfare »