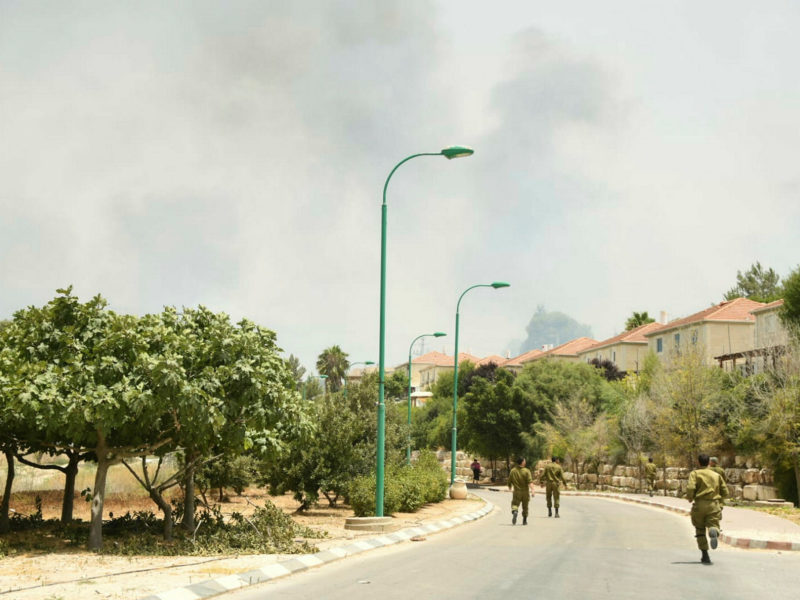 Fires broke out in several locations across Israel on Wednesday due to the extreme weather.

Buildings caught on fire in numerous locations and police blocked major routes and roads across the country. Police evacuated residents from their homes in more than a dozen locations.

Highway 2, a major Highway in Israel stretching from Haifa to Tel-Aviv, was closed due to a fire blazing in proximity to the road. The road was eventually reopened after firefighters contained the fire.

Two people were injured due to smoke inhalation near Haifa. They were treated by MDA forces at the scene.

Residents were evacuated from their homes in the communities of Shavei Shomron, Aderet near Beit Shemesh and Or Yehuda in the center as the fire engulfed the first line of houses. The police forces have closed off entrances and roads leading to many more neighborhoods and communities in endangered by nearby fires.

Firefighters have been battling the fires throughout the day, attempting to contain the blaze before residents are harmed and damage is caused to property.

The fires are the result of an extreme heatwave, reaching highs of 44 °C. The electricity demand broke an all-time record due to the extreme heat, hiking to 13,410 megawatts.

For just $100 per month you can bring the gospel to 10,000 homes. Join us as media missionaries! GIVE NOW
VIEW COMMENTS
« Israeli Forces Uncover Hamas Terror-Funding Network 9,000-Year-Old Prehistoric Settlement, One of the Largest in the World, Exposed Near Jerusalem »