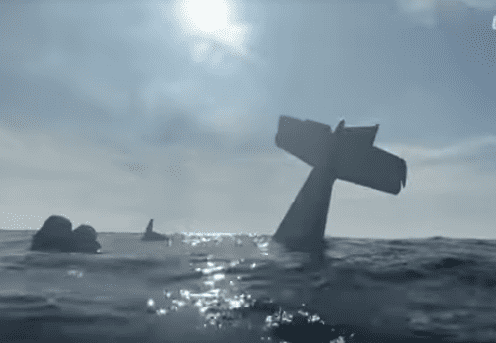 Two people were rescued after their plane lost power and crashed in California’s Half Moon Bay on Tuesday, August 20th.

The pilot, David Lesh, was traveling with one passenger in his single-engine Beechcraft Bonanza, and following close behind, was a pilot friend in another plane. When David realized he was having engine trouble, he notified the other pilot.

Friend and pilot, Owen Leipelt, was able to snap photos as David’s plane went into the icy waters of the Pacific.

Owen immediately called air traffic control and stayed circling the crash site, not knowing if David and his passenger were even alive. After an excruciatingly long ten minutes, Owen received a call from David. Both people were safe… but the plane was going down.

“I have never been so relieved in my life to hear him on the phone,” Owen said in an interview with NBC Today.

David and his passenger were able to grab a few things before the plane went down, one of which was David’s waterproof phone, but they have life-jackets in the small plane. They made makeshift floatation devices from seat cushions.

The two were in the frigid water for about 30 mins waiting for the Coast Guard to locate them. They remained positive knowing help was on the way and the video shows them with shakes smiles on their faces.

“Starting to get a little cold here,” David said into his phone’s video.

Shortly after they were found by the Coast Guard and lifted out of the ocean to safety. Miraculously, they had no injuries, and no hyperthermia.

“The Coast Guard was awesome,” David said of the rescue. “If we were out there for another, a half an hour or something, I don’t think my muscles would have been working.”

Praise God for the safe landing, quick thinking of both pilots, the Coast Guard, and the Lord’s protection in the water.