21-Year-Old Prays For Police Officer Because God Compelled Him 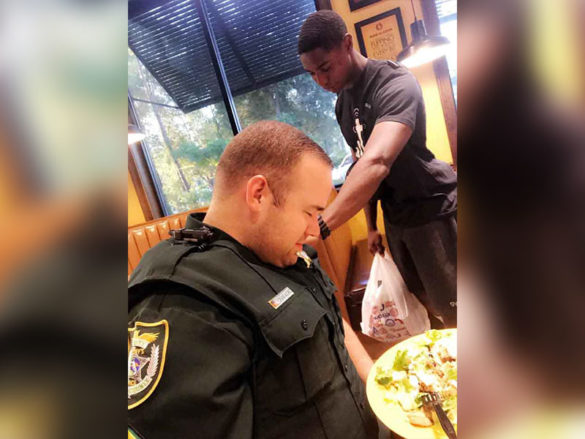 A young man walked up to a police officer to pray for him, and it became a moment the cop would “never forget.”

The life of a police officer is not easy. Every day, they put their lives on the line to protect the people. That’s why our prayer and encouragement could go a long way that would make a difference in their lives. 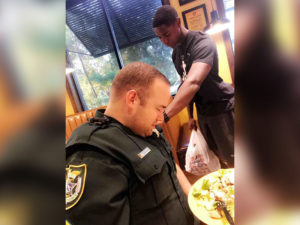 One night in a restaurant in Volusia County, Florida, Officer Cameron Tucker met a young man named Juan O’Neal. They were both waiting for their orders, and the 21-year-old began conversing with him. They had a casual conversation. But soon after, Juan walked up to him where his wife, Justin Tucker, also was. He then asked if he could pray for the Officer.

Cameron agreed and allowed Juan to place his hand on his shoulder. When he started to pray, it touched Cameron and his wife so much that they took it to social media to honor the young man.

The wife shared a snapshot on Facebook of the heartwarming prayer moment. Then she wrote, “Tonight was a night that I will never forget. This picture is a reminder of God’s constant love and perfect timing.”

Justin cried her heart out following the prayer. And they also had an amazing conversation with him.

WOMAN UNDER ARREST SHOCKED BY PRAYER OF THE KIND POLICE OFFICER

“He was on FIRE for God and you could feel His presence in the room,” she added. “He said that he had felt compelled to talk to us and to pray over Cameron.”

Further, the Officer also shared how it refreshed his faith because he really needed it at that moment.

“We could use all the prayer and help that we can get,” he said. “I couldn’t be more thankful that he stopped by that day.”

Juan, also an Officer’s son, attested that God compelled him to pray for Cameron and Justin.

“I really just wanted to let him know that I see him and that I appreciate his service,” he stressed. “because … my dad has gone through a lot and I see a lot on the news. I just wanted to go and just encourage them and just be a light.”