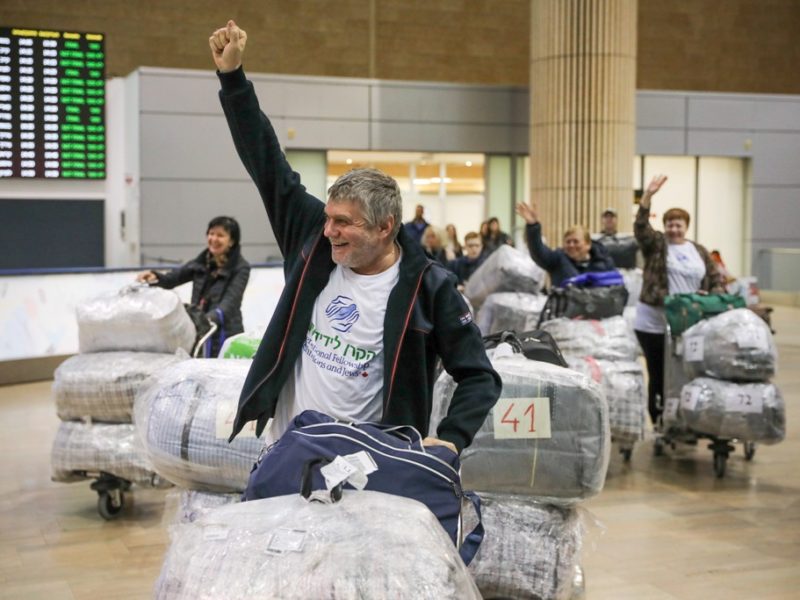 Just days before Israel is set to celebrate its Independence Day, 220 Jews from Ukraine landed in Israel, arriving on Monday on three flights organized by the International Fellowship of Christians and Jews (ICFJ), known in Israel as Keren L’Yedidut.

The Olim (new immigrants) remained undeterred from making Aliyah despite terrorists firing over 700 rockets at Israel over the weekend. 42 of the Olim have chosen to move to the cities of Ashdod, Ashkelon, Sderot, Gan Yavne and Beersheba, which were targeted by the terrorists ‘ fire.

Among the Olim are 50 children. The oldest is 84 years old.

“More than anything else, I am inspired by the immigrants who choose to continue to settle in Israel’s southern region and Gaza Envelope,” said President of The Fellowship, Yael Eckstein.

The Fedorchuk family from Kharkov will be moving to Ashdod. Stanislav said that he and his wife Alina had been preparing to move to Israel for quite some time, and that they chose Ashdod so they can live close to their relatives.

The Sidorenko-Makovetsky family from Nikopol is moving Gan Yavne, despite having some reservations about doing so following the recent rocket attacks.

“The situation in the south of the country is very stressful. We have two small children, and although we are very afraid that they could be harmed both emotionally and physically, we believe in the Israel Defense Forces and the Iron Dome system to protect us,” they said.

The Olim received a pre-arrival training seminar, which included tools in dealing with the threat of rocket attacks on Israel.

“This has been a challenging time of late for Jews everywhere, as increasing anti-Semitism is evident in many countries and reminds us of dark times when defenseless Jews fell prey to persecution and destruction,” said Eckstein. “However, to our great joy, today we have a state and a Jewish people responsible for its own fate. ”

This group is not the only one arriving this week to celebrate Israel’s Independence Day as new citizens. Another 37 Olim from Uruguay, Azerbaijan, Belarus, Brazil, Venezuela and France, will arrive in Israel, thanks to Christian friends of Israel.

For more than 20 years, IFCJ has been helping Jews to make Aliyah and has invested more than $200 million in bringing approximately 750,000 Olim to Israel.

For just $100 per month you can bring the gospel to 10,000 homes. Join us as media missionaries! GIVE NOW
VIEW COMMENTS
« Survey: Israelis Prefer State and Religious Law Over Western Values Ray Comfort Introduces The Dog Who Has Helped To Reach Millions For Christ »