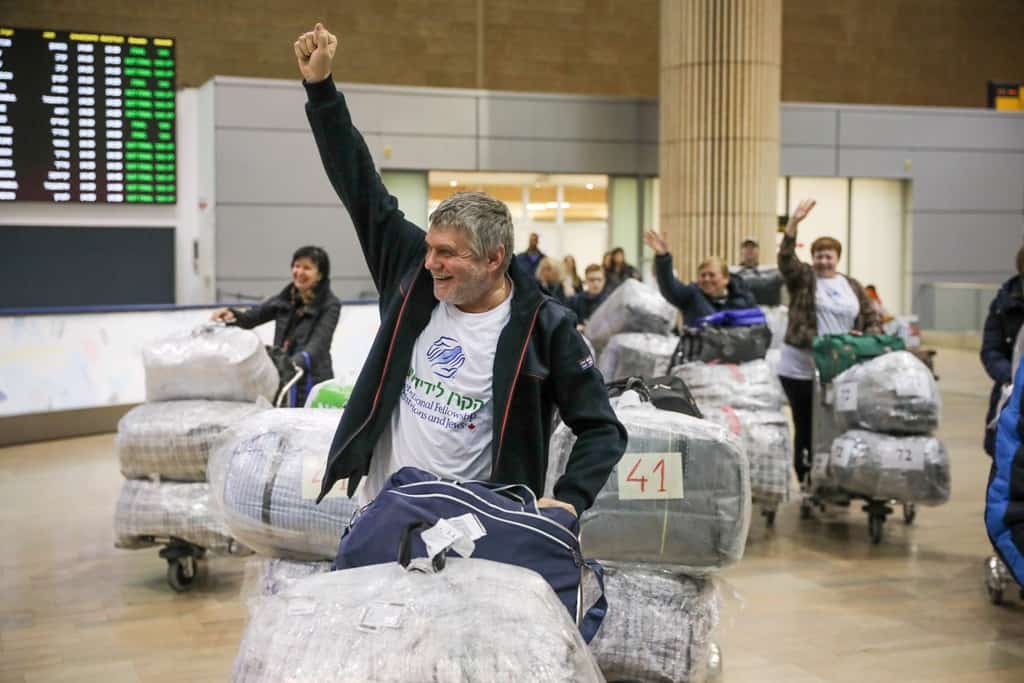 Some 250 Olim (new immigrants) from war-torn Ukraine landed in Israel on Monday, the latest group of Ukrainian Jews to make the Jewish State their home with the support of the International Fellowship of Christians and Jews (ICFJ).

Vira Sviatska, from Kharkov, said that she and many others had lived in constant fear.

She remembers the shelling that happened in Kramatorsk. “I was working at a local school back then, and there’s no certainty that similar events may take place in Kharkov as well.”

Volodymyr Zezehov and his wife Valentina provided a similar account of Donetsk.

“Mines and shrapnel were fired at any random part of the city. We were forced to seek shelter in the improvised bombing shelters on a regular basis. The truth is that this war is still ongoing and therefore we constantly live with a fear of the renewed combat activities,” they said.

The ICFJ has been working in recent years to facilitate the Aliyah of Jews whose lives have been devastated as a result of the ongoing conflict in eastern Ukraine between the Ukrainian government and pro-Russian separatists.

Tensions between Kiev and Moscow have been intensifying over the last three months after Russia seized three Ukrainian vessels in November that were sailing off the coast of Crimea, a region annexed by the Russian Federation in 2014.

The loss of hope for a future in Ukraine was a factor that influenced many of the Olim in their decision to move to Israel, while others fulfilled a dream to reunite with family members already living in the Jewish State.

“The main reason for us to make Aliyah is the family reunion,” said Halyna Shmayevych, from Kiev. “The overwhelming majority of our relatives live in Israel including the two daughters of my husband (Leonid) and four grandchildren. So it’s more than just logical for us to desire the reunion.”

The Tryhub family of six from Voznesensk were motivated by ideology. “The most important reason for us to move to Israel is the understanding that all the Jews are supposed to live in the country of their own,” the family said.

“Fortunately, more and more immigrants are voting with their feet and choosing to immigrate to Israel through us,” Rabbi Eckstein remarked.

For some two decades, the IFCJ has been helping Jews to make Aliyah and has invested more than $200 million in bringing approximately 750,000 Olim to Israel from 29 countries around the world.

The Olim receive comprehensive assistance from The Fellowship, including special grants and help in their acclimation in their new home in Israel.