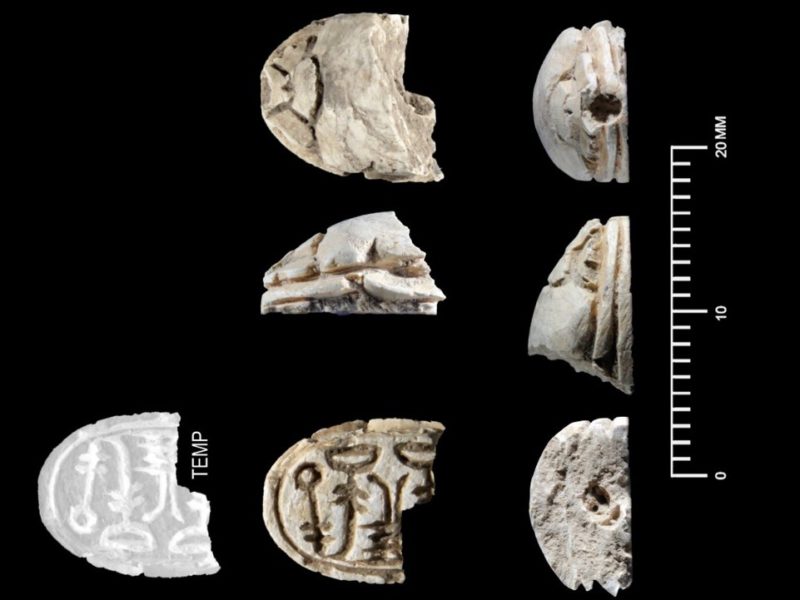 Several unique findings recently uncovered at the Tel Shiloh archeological site in Samaria have stirred excitement among researchers who say they can corroborate the Biblical story.

A rare Egyptian scarab seal, possibly belonging to a senior Egyptian official, was found at the site. Archeologists estimate it is some 3,000 years old.

Scarabs were carved in the shape of a dung beetle, a creature of cosmological significance in ancient Egypt. Numerous scarabs have been found in archaeological excavations in Israel.

The artifact is of Egyptian origin, and researchers say this is a testament of the Israeli exodus from Egypt described in the Bible. The Israelites later arrived in Israel and ultimately made Shiloh their capital city.

The Bible recounts how Joshua set the Tabernacle in Shiloh after conquering the Promised Land, and for more than three centuries, this was the center of Israelite life.

The diggers also uncovered a stone horn-shaped edge of an altar, dated to the Iron Age.   The Iron Age, also referred to as the Israelite period, is ascribed to the time period 1200–586 BCE and is divided into two chronological and cultural phases. Iron Age I, between 1200–1000 BCE, is characterized by the decline of the Canaanite culture and the appearance of new ethnic components, namely the Tribes of Israel and the Philistines.

Volunteers from 12 countries converged on Tel Shiloh, Israel’s ancient capital for 369 years, this summer to resume the third season of archeological excavations at the site.

Led by Dr. Scott Stripling, the provost at The Bible Seminary in Katy (Houston), Texas, and Director of Excavations for the Associates for Biblical Research (ABR), the archeologists are seeking to uncover the secrets of the multi-layered site, and especially those of the Tabernacle.

Yisrael Gantz, head of the Benyamin Regional Council in which Shiloh is situated, stated that the “rare findings at ancient Shiloh are exciting, powerful and prove in a forceful way our historic truth and our hold on the Land of the Bible.”

For just $10 per month you can bring the gospel to 1,000 homes. Join us as media missionaries! GIVE NOW
VIEW COMMENTS
« EXCLUSIVE: Not Only in Summer Camps – How Hamas Exploits Children During the Riots on the Gaza Border Independence Hall Tel Aviv: The Auditorium that Changed the Face of Israel »