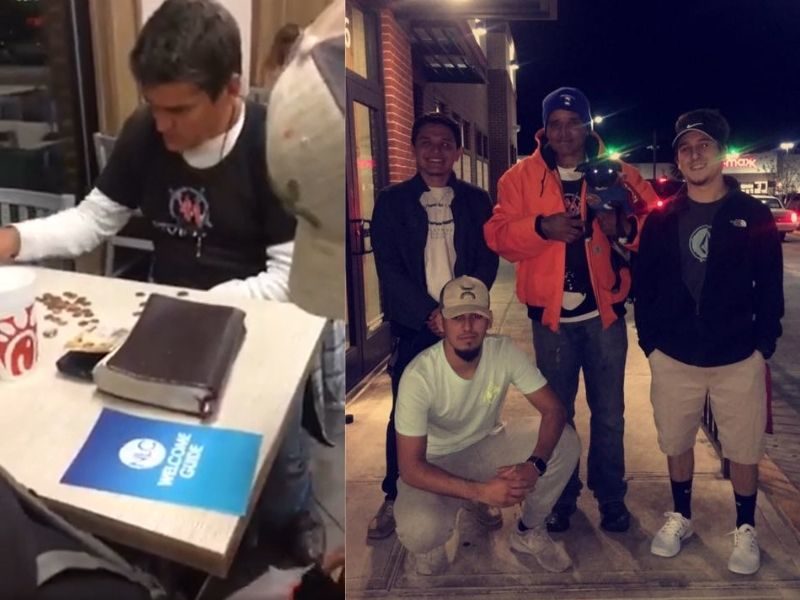 3 teenage friends were dining in a Chick-fil-A restaurant when they saw a homeless man at his table, counting change for a meal. The three boys then decided to act of kindness by giving the man a free meal and brand new clothes.

Ryan Cook and his friends ate at their local Chick-fil-A restaurant in Corpus Christi, Texas. While they were enjoying their food, they saw Eddie at the nearby table. He seemed to count his change on the table to buy himself a meal.

The Chick-fil-A staff said that Eddie would come to the fast-food chain often. He would ask for handouts, not for himself but his dog, Socks. Eddie made sure his dog would get to feed first before receiving a portion for his own.

Ryan saw a worn Bible beside Eddie. According to Inside Edition, the Bible may have resonated with the boys that they responded to Eddie’s situation instantly.

They bought Eddie some gift cards to Chick-fil-A then they went to the sporting goods store. They gave him a brand new jacket, 3 shirts, a beanie, and a first-aid kit.

After purchasing their surprise gift, they took a camera to record Eddie’s reaction. And indeed, he was more than happy upon receiving his new clothes. He said, “This is almost like Christmas because I didn’t get anything for Christmas this year.”

Ryan replied, “Think of it as a late Christmas present.”

The three friends posted their good deeds on their social media not to boast but to inspire others to do the same. Ryan exhorted, “Just setting an example for everyone else. Be selfless and do good for others. Then the world would be a better place for everyone. Felt the need to post this to inform others to do better, noy to gain anything from it.”

For just $100 per month you can bring the gospel to 10,000 homes. Join us as media missionaries! GIVE NOW
VIEW COMMENTS
« ‘Especially Significant Relations’: Israel Signs First Agreements with Morocco ‘God’s Not Dead 4’ Starts Filming In January 2021 »