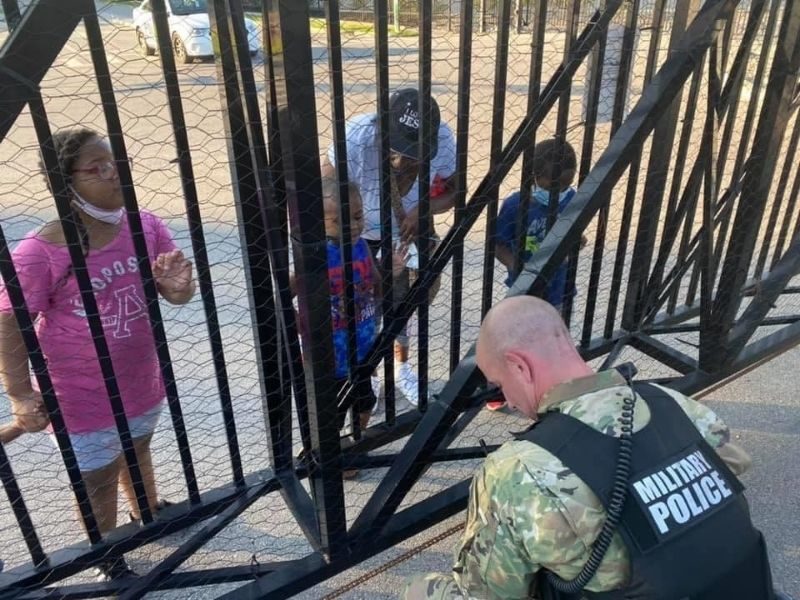 A 5-year-old boy was caught praying with a national guardsman in the midst of the Derby Protest in Louisville. The captured moment along with a touching caption is helping people restore their faith in humanity and love.

Kentucky National Guard Specialist Dan Otterson told NBC News that he was almost in tears during the powerful moment. He can’t help but share the memorable interaction he had with the “little angel” on his social media page.

On his Facebook post, he explained why the prayer means so much to him and his fellow soldiers. “Midway through Derby day, we began getting confirmation that multiple protest/counter-protest groups were in the area and heavily armed. Groups began circling Churchill Downs. And at one point my team’s position was face to face with a large group of protestors, heavily armed and not fans of law enforcement,” Dan recalled.

He then noticed “an older black lady who had 3 very small children with her. She hung towards the back, was quiet, not saying anything towards my team or LMPD. [They] waited for the majority of the protestors to thin out.”

After a while, the lady approached the fence line and said that the youngest boy wanted to pray for his team. “When I tell you I’ve never in my 35 years of being alive,” Dan said. “I’ve never seen someone pray with such conviction and such true sincerity. It was amazing. We kneeled down immediately. This evangelist comes out of this little boy. He’s like, ‘Dear Jesus, we know you’re a loving God and a benevolent God. I’m calling on you to put a hedge of protection (for) these individuals around these police officers and make sure they’re safe. We know you’re a loving God.’”

Love and humanity is still alive

“In a world full of aggression and tension this little boy showed that there is still love and compassion. Regardless of skin color, gender, or how you feel about my occupations. While I may never see that little boy again, I know he was sent at that moment to keep us safe.”

He concluded, “God sent a 5-year old boy to strengthen soldiers, and that’s something you can’t ever replicate.”

For just $100 per month you can bring the gospel to 10,000 homes. Join us as media missionaries! GIVE NOW
VIEW COMMENTS
« Prayers For West Coast As Wildfire Continues To Rampage Region And Death Toll Fears To Rise Teen Creates Dolls Resembling Kids With Unique Medical Conditions To Make Them Feel Loved »