5,000 Christians On Way to Jerusalem to Show Solidarity with Israel | God TV
Israel 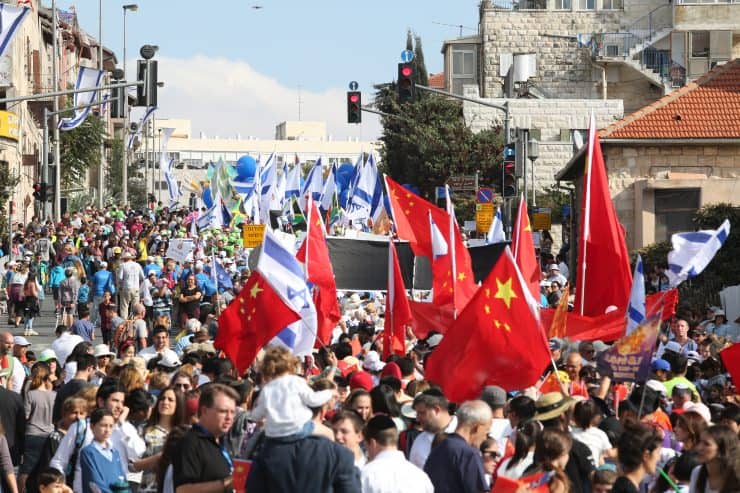 Over the coming week, more than 5,000 Christians from nearly 100 nations will be arriving in Jerusalem to take part in the 40th annual Feast of Tabernacles celebration, sponsored by the International Christian Embassy Jerusalem.

The week-long festivities will constitute the largest Christian gathering in Israel this year and the largest solidarity mission to Israel of 2019.

“Over the past forty years, we have witnessed thousands of Christians from nations near and far coming up to Jerusalem for the Feast of Tabernacles each and every year, in good times as well as difficult times,” said ICEJ President Dr. Jürgen Bühler. “With this record of sustained success, it seems clear that the ancient tradition of Gentiles joining the Jewish people in Jerusalem for Succot has been revived in modern times. We are truly excited about welcoming this year’s colorful groups of Feast pilgrims from all over the world.”

One of the event’s highlights includes the popular Jerusalem March through the streets of the capital.

This year’s Feast program will feature a special presentation on the ICEJ reaching a milestone of assisting over 150,000 Jews in making Aliyah to Israel since its founding in 1980.

The ICEJ was established during the very first Christian celebration of the Feast of Tabernacles in September 1980, at a time when the last thirteen national embassies had just left Jerusalem for Tel Aviv. In response, over 1,000 Christians from 32 nations attending that first Feast gathering decided to open the International Christian Embassy in Jerusalem as an act of solidarity with the 3000-year old Jewish attachment to this city.

The ICEJ has since grown into the world’s largest Christian Zionist ministry, with branch offices in over 90 nations and a reach into more than 170 nations worldwide.

For just $100 per month you can bring the gospel to 10,000 homes. Join us as media missionaries! GIVE NOW
VIEW COMMENTS
« Israel Blocks Exit of 4 Terror Operatives Involved in Temple Mount Riots Vast 5,000-Year-Old City, One of the First and Largest in Near East, Uncovered in Israel »