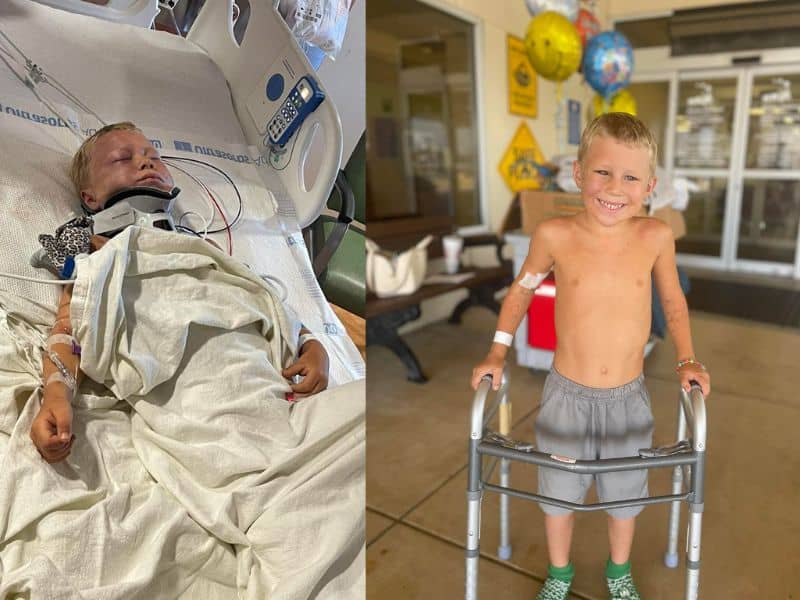 It is hard for any mother to see their child suffering from an illness or accident moreover, run by a bulldozer. But, a mother from Franklin, Texas, held on to God. She recorded her 6-year-old boy’s recovery from the bulldozer mishap and inspired many with the miracle.

It was on July 27 when the accident occurred. Bodie Boring went with his father’s job site when an 18,000-pound bulldozer ran over the little boy. According to his mother, Samantha, Bodie suffered fractures in his pelvic bone, two bruised lungs, a skull fracture, a blood clot in his head, and a brain bleed.

With all the numerous injuries, including getting infected with COVID, there was little chance for a 6-year-old to survive. But Bodie is different. By the grace of God, he became the “strongest little boy in the world.”

Within just five days after the accident, Bodie was able to walk. Samantha shared, “You may be tough, but you aren’t walking five days after getting run over by an 18,000 lb bulldozer tough. God is good all the time.”

Samantha chronicles Bodie’s journey in recovery on her Facebook page. And it garnered support and prayers for the family. Followers have even helped raise funds for the medical expenses on their GoFundMe page. As of writing, they have reached more than $51,000 toward the goal of $60,000.

“Folks, I’m gonna tell you one thing,” Samantha said. “If you don’t believe in God, Bodie is proof right here. I know for a fact God had a hand in saving my baby. There is no other explanation as to why I’m not leaving this hospital without my baby other than God!! I’m still in shock. God is good all the time.”

And finally, last Saturday, doctors discharged Bodie from the hospital and went home. He still needs more treatments, but he is “doing great.”

Samantha told KBTX, “He has amazed me so much. His spirit has been so positive this whole time. Even in his worse pain, he’s just been amazing. This is a miracle, and there’s only one explanation as to why he’s still here, and I truly believe that that’s God.”