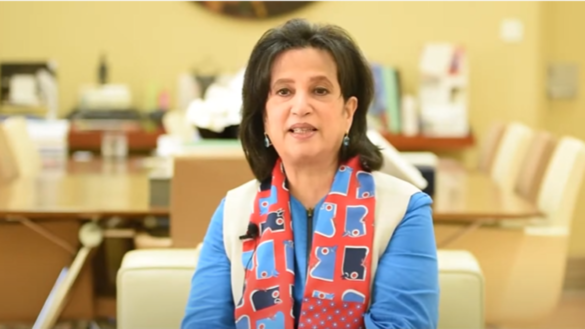 The King of Bahrain dismissed Mai bint Mohammed Al Khalifa from her post last Friday for an incident last month when she snubbed Israel’s first-ever ambassador to the Gulf state at a diplomatic event. Al-Khalifa is a member of the royal family and has served the kingdom for 20 years, most recently as the chief of the Bahrain Authority for Culture and Antiquities. In 2014, Forbes Middle East named her the 6th most powerful woman in the Arab world.

The incident occurred at the funeral of the father of the US ambassador to Bahrain, Steven C. Bondy. Al Khalifa refused to shake hands with Israel Ambassador Eitan Na’eh, and then she left the event in protest of Na’eh’s presence (a move praised by Hamas, by the way).

The official statement from the kingdom praised Al Khalifa for her service “with distinction” and cautioned that her dismissal should not be misinterpreted, even though the timing happened the day after a phone call between the king and Israel Prime Minister Yair Lapid.

“Wide-ranging changes announced this week within a number of government bodies follow on from the largest cabinet reshuffle in the kingdom’s history. Updates to leadership positions within public sector bodies should not be misinterpreted,” according to the official government statement.

Lapid had posted on social media the day before Al Khalifa was fired, “Today, I spoke with my friend, His Royal Highness Prince Salman bin Hamad Al Khalifa, the crown prince and prime minister of Bahrain. Israel and Bahrain share a vision for a more stable and prosperous Middle East, and we’re working together to make that vision a reality.”

Israel and Bahrain established full diplomatic ties in 2020 with the signing of the Abraham Accords. Bahrain, a wealthy but small Gulf state, is increasingly under threat of attack from Iran. The kingdom is already home to the US Navy’s 5th Fleet, which patrols the Persian Gulf, parts of the Indian Ocean, and other waters in the Middle East. In the last year and a half, they have quickly become one of Israel’s closest allies in the region.

Earlier this year, in February, Israel and Bahrain signed a historic security agreement.

“We have reached new heights today in Israel-Bahrain relations, with the important meetings that took place and with the signing of the historic [Memorandum of Understanding]. We are building on the ground-breaking Abraham Accords and deepening ties between our nations,” Israeli Defense Minister Benny Gantz said during his visit to Bahrain in February. “Only one year following the signing of the accords, we have achieved an important defense agreement, which will contribute to the security of both countries and the stability of the region.”

Israel has recently agreed to sell Bahrain some of its advanced drones and provide training to the Bahraini military on how to utilize them.