7 Tips To Conquering Procrastination...Cause It's Too Easy to Put Things Off! | GOD TV
Lifestyle 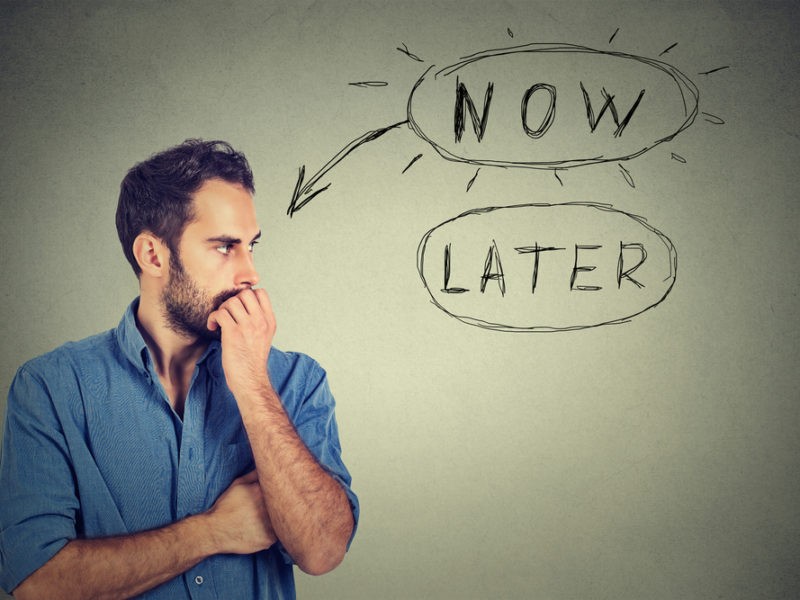 Procrastination. We all do it. Why do we as humans tend to avoid the very thing we need to address most? What is it that causes us to pull back and avoid a particular project, conversation, or situation? How can we minimize those feelings of procrastination and instead boldly, courageously go after the things that we’d prefer to avoid?

Even now in writing this, I’m experiencing the resistance of investigating introspectively that which is causing me to shrink back from attacking the very goals I’d like to accomplish with greater enthusiasm, energy, and boldness. The struggle is real.

Think about the idea of writing a book. Now think about everything that needs to take place for that book to get written. If one has never written a book before, knowing where to start is even an intimidating idea. It’s easy for fear to wash over the good intentions the book represents, backing the individual into the proverbial corner in fear. Fear causes humans to freeze and become completely incapacitated to respond in any effective manner.

“There is no fear in love, but perfect love casts out fear because fear involves torment. But he who fears has not been made perfect in love.” (1 John 4:18)

Take the idea of writing a book again. Start small and basic, if there’s a theme or idea formed, start writing out topics relevant to the message of the book. For example, if writing a recipe book, what type of recipes? Is it a dessert recipe book? What kinds of desserts; pies, cakes, cookies, etc.? It’s so simple to think about a little bit at a time.

There’s a famous question or analogy, and it applies to fighting procrastination, it’s “How do you eat an elephant? One bite at a time.” Think about Noah for a second; the ark took more than a day to make. It took multiple decades for him to build something that nobody ever imagined. Up until that point, there was no need for a boat in the first place.

Create habits of diligence. What can be done every day, week or month to move towards the goal desired to accomplish? Put it on the calendar and be faithful to fulfill the little tasks necessary to progress. Noah had to chop down one tree at a time. How much lumber does your ark need? Chop down one tree at a time. Maybe that’s one tree a day, week or month? Determine what diligence looks like and go after it.

How often does an individual tend to overthink the task? People lose precious time navel gazing, rather than taking bold action. Focus on more action and less thinking or talking.

“All hard work brings a profit, but mere talk leads only to poverty.” (Proverbs 14:23)

5. Be Willing To Grow

Noah had zero experience in crafting a viable and seaworthy boat. In fact, there wasn’t a person alive who had ever created such a thing. Laughing and mockery surrounded Noah by those in his community because it had never rained before. He had no mentors, aside from the Creator Himself (which is more than enough). Think about it, though, most occupations and professions have mentors, educators, etc. to lead one down a given path. There was no path for Noah. He was the trailblazer. Noah had to acquire new skills and abilities – both physically and emotionally to accomplish the ark.

The individual may need to identify new skills necessary to achieve the goal before them. Dive in! The sooner one acquires the new skills; the faster one can accomplish their mission.

“The beginning of wisdom is this: Get wisdom. Though it cost all you have, get understanding.” (Proverbs 4:7)

If Noah made excuses about his inabilities, he and his family would have drowned. The entire human race would have seized to exist if Noah made excuses as to why he was unqualified to build an ark. Excuses are death to a dream and are simply nothing more than a form of complaining. Nobody benefits from complaints or excuses. Assess the situation and make the most it. If there’s nothing positive about the situation, don’t say anything. Don’t be the sluggard.

The sluggard says, “There’s a lion outside! I’ll be killed in the public square!” (Proverbs 22:13)

Sometimes it’s easy to forget the purpose of the project. Think about the, “why”. Why was this important back when the task was started? Boredom can set in, other opportunities can capture one’s attention and distract from us getting to the finish line. At this point, it’s time to focus and re-align with purpose. Finishing this project will build confidence and provide opportunity to start a new exciting project.

Stay the course. Finish strong. It’s going to be worth it.

Ultimately, the underlying root of procrastination is some type of fear or fears. Face the fear and move through it. Chances are, the greater the fear or resistance to the project, the more rewarding it will actually be for the individual to accomplish. Fear can act as a guideline towards calling and destiny. Satan uses fear to prevent us from accomplishing great exploits for the Kingdom of Heaven.

Face the fear and watch mountains be cast into the sea. In Jesus name. Amen.

“I can do all things through Christ who strengthens me.” (Philippians 4:13)

“Yet in all these things we are more than conquerors through Him who loved us. For I am persuaded that neither death nor life, nor angels nor principalities nor powers, nor things present nor things to come, nor height nor depth, nor any other created thing, shall be able to separate us from the love of God which is in Christ Jesus our Lord.” (Romans 8:37-39)

For just $100 per month you can bring the gospel to 10,000 homes. Join us as media missionaries! GIVE NOW
VIEW COMMENTS
« Former Rebellious Christian Returns to Clubs With an Incredible Mission Miracle Baby: Doctors Astounded as Tumor Disappears »