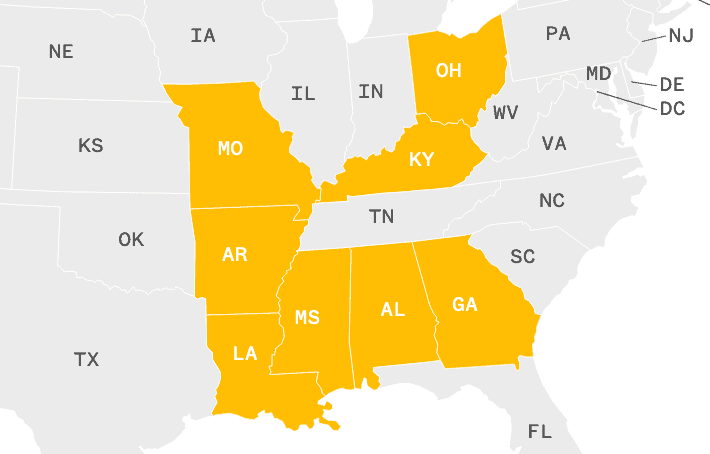 As broken down by NBC News, the states of Ohio, Kentucky, Missouri, Arkansas, Louisiana, Mississippi, Alabama, and Georgia – forming a connected chain – along with Utah, have passed strong pro-life bills. (In the vocabulary of NBC, of course, these are “anti-abortion” laws.)

Of interest is the fact that, in most of these states, the bill passed with overwhelming approval in each of the legislative houses. For example, the Alabama bill, prohibiting all abortions and with severe penalties for abortion practitioners, passed by a vote of 74-3 in the House and 25-6 in the Senate. That’s what you call decisive.

In Missouri, where all abortions after 8 weeks were prohibited, the bill passed by a margin of 110-44 in the House and 24-10 in the Senate.

In Louisiana, which prohibits abortions once the baby’s heartbeat is detected (one of 5 states to pass this law), the vote was 79-23 in the House and 31-5 in the Senate. This bill is also noteworthy in that it was signed into a law by a Democrat governor.

Let’s take a look at the NBC map of America to see where things stand at the moment. 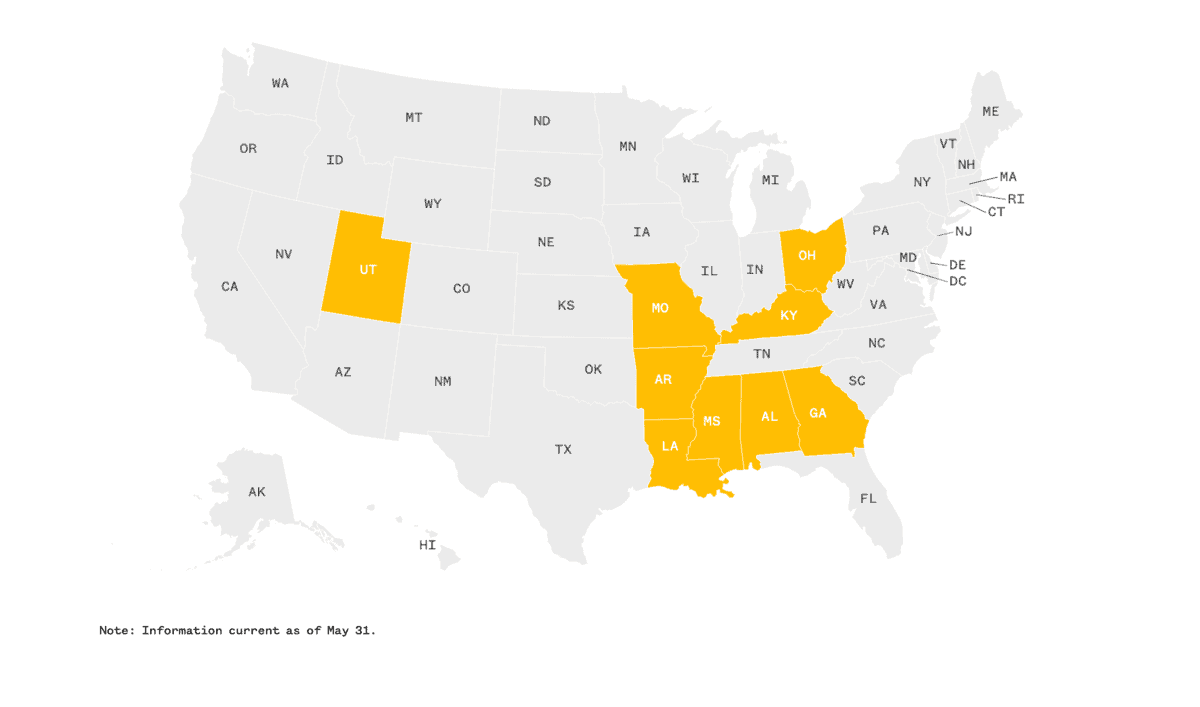 A solid block of states against abortion

And there are 6 more states which have considered (or are considering) new pro-life legislation (Florida, South Carolina, Minnesota, West Virginia, and Tennessee; a pro-life bill did not succeed in Maryland). Grouping these on the map along with the 8 states that have already passed pro-life bills makes for a solid block, especially in the southeastern United States.

If we add in Texas, where a very strong pro-life bill failed to pass in April, that block becomes even bigger.

A battle is also taking place in North Carolina (again, adding to this significant block of states), where legislators are trying to override Gov. Roy Cooper’s veto of the Born Alive Protection Act.

It’s also significant that there are presently 6 states with only one abortion clinic (North and South Dakota, Missouri, Mississippi, Kentucky, and West Virginia), with Missouri poised to close their last clinic until stopped by a federal judge just days ago.

Without question, major strides are being taken by pro-lifers, and sooner or later, one of these state laws will be appealed all the way to the Supreme Court, potentially leading to the overturning of Roe v. Wade.

Still much work to be done against abortion

Unfortunately, New York, Virginia, Kansas, and now, Illinois have passed (or, ruled on) new bills that are the most extreme pro-abortion laws in our country’s history. And in California, Governor Gavin Newsom is inviting women to come to California to abort their babies. (Is this not utterly macabre?)

As for the new law in Chicago, Liberty Counsel explains that it “is even more extreme than New York’s infanticide law. The ‘Reproductive Health Act’ repeals the state’s ban on partial-birth abortion, allowing abortions through nine months, and requires insurance companies to provide coverage.”

Yes, the bill “strips all rights from unborn children” – this is done quite explicitly, stating that the fertilized egg or embryo or fetus has no rights – and it “changes the definition of viability, and legalizes abortions through all nine months of pregnancy, up to the moment of birth, for any reason. The bill eliminates the Abortion Performance Refusal Act so that medical professionals will be forced to recommend, perform or assist in abortion procedures. This legislation also compels insurance plans to provide ‘coverage for abortion care,’ and all licensing requirements for abortion facilities would be removed.”

So, while state after state is choosing life, other states are choosing death, even allowing for things as barbaric as partial birth abortion, along with refusing to guarantee medical care for babies who survive abortions.

Surely these grotesque and obscene bills will ultimately be overturned. Surely Americans will wake up to their defense of the indefensible. Surely the tide will turn – at least, that is my fervent prayer and hope.

As for the impending (and already growing) civil war over abortion, Axios quotes these representative, polar-opposite positions.

According to Sue Liebel, Missisippi director for the pro-life, Susan B. Anthony List, “For pro-life folks, these are huge victories. And I think they’re indicative of the momentum and excitement and the hope that’s happening with changes in the Supreme Court and having such a pro-life president.”

In contrast, according to NARAL Pro-Choice America’s Kristin Ford, “The gloves are off” (among abortion opponents). “They feel like they have the wind at their backs and they don’t have to dance around their true intentions anymore.”

Indeed, we do feel the wind at our backs, but it is the wind of life, of esteem for every person, no matter of how fragile, of love for both the mother and her child.

It’s up to us, now, to seize the moment, to continue to change hearts and minds through every Godly means at our disposal, to make the case for life.

The opposition will be fierce, but we’re gaining ground every day, and with a concerted, nationwide effort, bathed in prayer and fasting, we could witness a glorious, transformative pro-life revolution. And the more vehement the hatred that comes our way, the more determined we must be to “overcome evil with good” (Romans 12:21).

Let’s do it for the sake of the little ones.

Also Read: A Response To The Alabama Abortion Bill – The Coming Civil War Over Abortion

For just $100 per month you can bring the gospel to 10,000 homes. Join us as media missionaries! GIVE NOW
VIEW COMMENTS
« GOD TV Series That Will Touch Your Heart EXPOSED: Senior PA Ministers Caught Laundering Money for Hamas in Malaysia »