9/11: One Man’s Supernatural Story of Survival 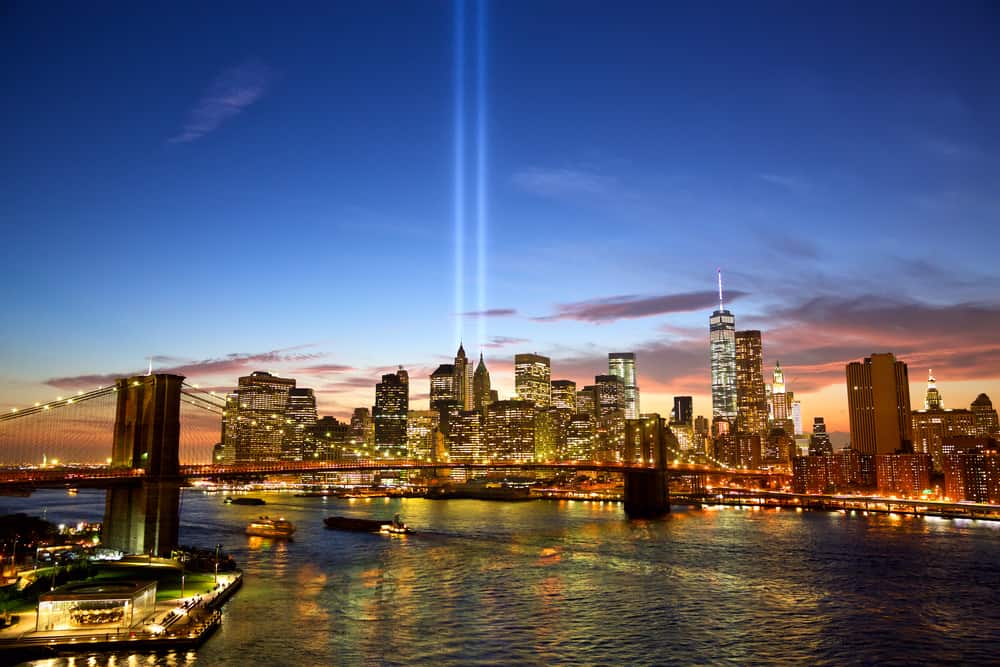 My father has worked in the Financial District of New York City for over 20 years. On September 11th, 2001 he was in Deutsche Bank Plaza, directly across the street from the Twin Towers, a building which was heavily damaged when the towers fell, and has since been demolished.

This is the miraculous story of his survival as told in his own words in the days that followed September 11th, 2001.

Through the Valley of the Shadow of Death

I was in my building, Deutsche Bank Plaza at 130 Liberty St. New York, NY. I was on the 29th floor getting coffee and chatting with a coworker when there was the sound of an explosion. Our building trembled, windows rattled and the lights flickered. We looked at each other and said: “that did not sound good.”

We went to the window and glanced toward the Twin Towers. Smoke was billowing out of the upper levels and the air filled with debris and office papers. It appeared to be coming from the south tower and the initial information was that a bomb had exploded. I hopped on an elevator with two maintenance men and rode down to the 27th floor where my office was located. Shortly thereafter security came over the loudspeaker and said not to evacuate the building and to wait for further instructions.

In the meantime I phoned Deb, my wife, and said the following: “I don’t want to alarm you but we believe a bomb just went off in the Twin Towers and our building felt the incredible impact. It is very frightening.” Deb ran to the television and told me that a plane had collided with one of the Twin Towers and it was on fire. I hung up to await further instructions.

A second explosion hit with even more intensity than the first and now terror filled my entire body. A shower of debris was hitting the windows like a giant hailstorm, even breaking some of them. Debbie paged me with our urgent code and I immediately called her back. She said: “Dave, it was a kamikaze plane or something and we are under attack. Get out of New York now!” While on the phone to Debbie, security came over the loudspeakers and gave us instructions to evacuate the building immediately. I told Deb I had to go and I would call her when I was out of the building.

We walked down 27 flights of stairs. There wasn’t much panic, people were assisting the elderly employees and things appeared orderly. No one was fully aware of what was happening. Up to this point, our most reliable source of information was from calls to our loved ones.

We entered Greenwich Ave. on the southeast corner of the building. Nothing could have prepared me for what I was about to see. It looked like a war zone. Debris and devastation were everywhere. Vehicles were covered and smoke was coming from cars that were hit. The air was filled with office papers. It gave an eerie impression of a ticker tape parade. My colleague, Greg Shefrin, and I began to walk south and I stopped to look up at the towers burning. It was the most awe-inspiring and horrific sight I had ever seen. I stood frozen unable to process what my mind was seeing.

Finally Greg broke my trance and said, “We have to get out of here!” (which I would realize later to be instrumental in saving my life) and we hurried down the street. I wanted to call Debbie and tell her I was out of the office and OK. My words to her were: “I am out of the building and safe, it looks like a war zone, it’s horrible. I am going to try and get a ferry back to NJ, I will call you later.” I had no idea what I was about to encounter.

We continued south about four blocks on Greenwich Ave. when the South Tower collapsed. People started to scream and run for cover, attempting to escape from an enormous black cloud of smoke and debris which chased us at a high rate of speed as we fled, seeking shelter amidst the chaos.

We ran towards the entrance of the Brooklyn Battery tunnel as the giant cloud chased us. Greg never stopped running and without thought ran directly into the tunnel. I lost sight of him. People were running past me. I remember a man tripping and falling. I hesitated, thinking if I enter the tunnel I may never come out. I feared I would be trampled to death or suffocate from the black cloud. My hesitation was costly. The huge cloud descended upon me as I stood against the cement wall approximately 75 feet up from the tunnel entrance. The lights went out around me. I could not see my hand in front of my face. I inhaled and choked on the debris of the cloud I was trying to escape. It was very hard to breathe.

A sense of death crossed my mind and my first thought was that I just told Debbie I was safe and out of danger, and now I am about to die. I put my shirt up to my face and started taking short shallow breaths. Out loud I asked, “Jesus where are you?” A woman standing next to me grabbed my arm and nudged me as if to push me forward. I started to blindly feel my way through the darkness toward the tunnel with her hanging onto my arm.

I was still fearful of what awaited in the tunnel, but I had no other option. People were screaming in the darkness of the cloud, some crying for help. I couldn’t see them. We bumped into the traffic pylons as we slowly moved in the direction of the tunnel. We finally saw the headlights of cars at the tunnel entrance, although the darkness was so thick we had to get very close before we saw them. People were sitting in their cars; numb not knowing what to do. I started to yell at them to get out and get moving out of the tunnel. I had feared the tunnel might have been a bombing target.

As I gathered myself and started to think more clearly I prayed to God one of my favorite bible verses. Philippians 4:13 “I can do all things through Christ who gives me strength.” I just kept repeating it over and over as I found my way through the other side.

Part of the way along there was a security connector to the companion outbound tunnel, which people had found and through which we made our way. Because of the downtown events there had been no traffic this way and the tunnel had no vehicles in it.

It seemed like an eternity although the time span covered some two hours. Emerging from the east end, my suit, body, hair and face were covered with the silt and filth from the debris cloud. I walked ahead and there were some medical personnel and paramedics helping people as best they could. I got some water, had my eyes flushed out and my face washed somewhat. My eyes remained irritated from particles of debris that filled the air. I called Deb and informed her I was all right. She was listening to my experience just saying “oh my gosh” to every word I said.

The owner of a local barbershop was allowing people to come in, rest and gather themselves after this ordeal. My adrenaline was starting to wear off and I found myself exhausted still unable to process again what I had just witnessed firsthand. I stared at the wall in front noticing some pictures hanging and my eye caught the attention of a frame that had a bible verse by itself in the center of the frame. It was Philippians 4:13. “I can do all things through Christ who gives me strength.” I believed the Lord had been with me the whole time.

I left the barbershop with Greg and walked along trying to figure out how to get to my sister in-law’s, who recently moved to Brooklyn. We eventually got a ride to her house by a stranger eager to help us. She had no idea we were coming. She was aware of all that was going on and was sure I was dead. She was in her car only minutes before searching the streets for me in hopes I had made my way towards Brooklyn. After watching the devastating collapses on TV she feared the worst. When I rang the doorbell her landlady let us in and Lorraine was joyful to see us. Tears filled her eyes as she took us in, gave me clothes and fed us.

Life is tenuous and hangs by a thread. I had just had a bout with skin cancer a few months before and now this. The eternal perspective is clearly in view.

“Even though I walk through the valley of the shadow of death, I will fear no evil, for you are with me.” Psalm 23:4

Matthew is a Christian author, entrepreneur, business leader & speaker. He started his career in law as a paralegal at White & Case and planned to apply to law school. Realizing law school wasn’t the right path for his life, he transitioned to banking. After becoming fed up with the culture of corporate life and Wall St. he made the big decision to change industries and get into the digital technology space. He loved it and never looked back. He started his tech career in the NY tech scene at LinkShare then moved on to hold various marketing roles at Shutterstock, where he was a key contributor to the company’s hyper growth pre-IPO. Today he runs a boutique consulting firm, is a partner in a film production company, is a sought after speaker, and is the founder of Startup Revival, an online coaching community focused on helping Christian entrepreneurs grow their businesses.