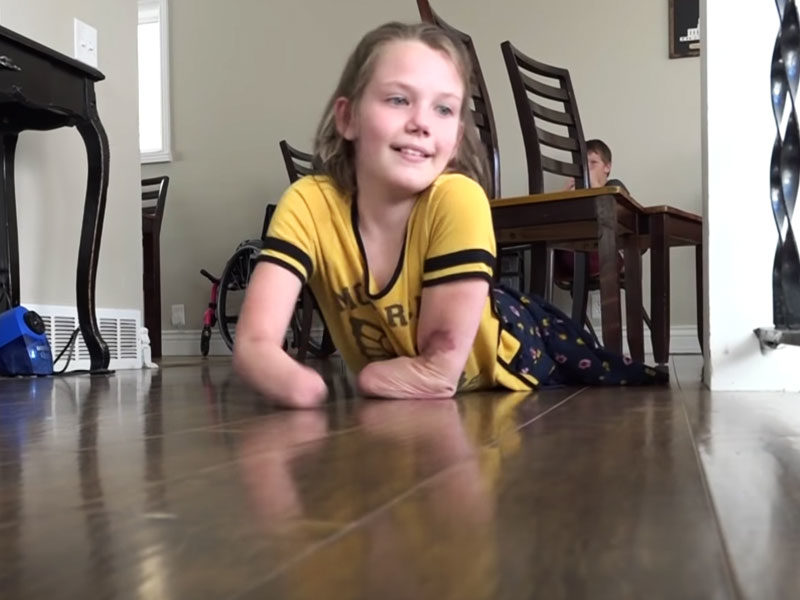 A 9-year-old girl who was injured in a car accident and lost her limbs is inspiring the world today; everyone calls her a blessed and miracle young lady!

Rosalie has a strong personality. According to her dad Benjamin, “On the day she was born,” she already had a fiery and robust spirit ever. Then he added, “She definitely likes things her own way.” More so, her mother, Eileen, speaks of her as a “mini-mom” because she takes charge to watch over her younger siblings Micah and Charlotte. They were a picture of a perfect and happy family. But in 2019, the Parker family never thought their joy would turn to sorrow on the fateful day of December fourth.

The eldest child went through a life or death circumstance when she and her father were in a car accident. Benjamin and his 9-year-old daughter were on their way home when the collision happened.

“I was turning into the driveway and I didn’t see an oncoming car and we got t-boned in front of our house,” the father recalled. Another vehicle struck the father and daughter’s car so close to their own home.

“All I remember after the car crash is they had to pick me up and put me on this little bed thing and then they put me in the ambulance,” Rosalie recalled.

Two to three days later, the doctors told the family they could go home in just a few more days. However, Rosalie suddenly got a fever, which worried the doctors. Then an unexpected event happened.

“We were downstairs (at the hospital) because some friends had come to visit. We heard on the intercom a code blue and they said her room number,” Benjamin said. “And we raced to the elevator and someone was there. I said, ‘This is an emergency. Our daughter is dying.’”

When they reached her room, the couple saw that tons of doctors and staff tried to revive their daughter. Both cried out and prayed to God at that moment. Thankfully, she came back to life. Then hospital workers immediately decided to take her to Primary Children’s Hospital in Salt Lake City.

“As soon as we got there, they immediately started working on her and she coded a second time. That’s when I called Ben and said they weren’t sure if she was going to make it through the night and he needed to get up there,” Eileen said.

Doctors found group A Streptococcus bacteria in Rosalie’s blood that spread throughout her body. And it caused her organs to shut down.

“They basically said she’s not going to make it but if she does, you’ll be on dialysis for years. She’s not going to have any brain function. Her kidneys will be shut down and you just don’t even know what kind of life she’ll have,” Eileen recounted what the doctors said.

Shortly after, doctors asked the Parkers that if Rosalie’s heart stops again, “Should they resuscitate or let her go?”

“We came together and said there’s no way we could make that decision. We’re going to trust in our Father in Heaven. It’s in His hands and we just put all of our faith in the Lord,” Benjamin declared.

A month later, doctors advised that they would have cut off Rosalie’s limbs, hands, and feet to save her life. The family had no choice and agreed. And several more months later, the 9-year-old finally left the hospital, fully recovered from the infection.

The Parker family thought their lives would become unhappy because of Rosalie losing her limbs. But today, the family is thanking God for working things out for good. Moreover, they attested that after the accident, life has become happier for them. Because they know God has a purpose for Rosalie’s life, and they trust that well.

For just $100 per month you can bring the gospel to 10,000 homes. Join us as media missionaries! GIVE NOW
VIEW COMMENTS
« ‘Huge Drama:’ Israeli Experts Excited About Publicized Netanyahu Meeting in Saudi Arabia A Once Suicidal & Depressed Woman Marries An Ex-Drug Dealer Lives A Transformed Lifestyle »