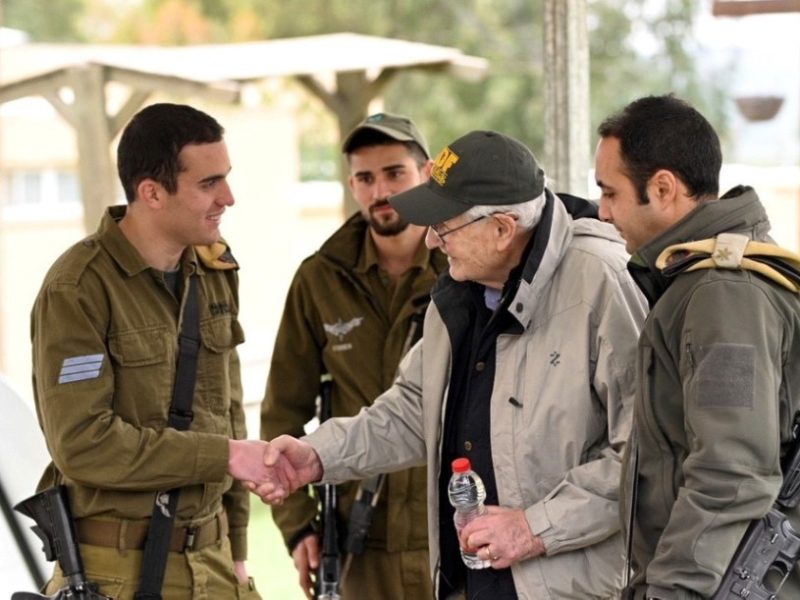 Irving Bienstock, a 93-year-old Charlotte resident and Holocaust survivor, fulfilled his dream of visiting an Israel Defense Forces (IDF) military base on Tuesday when he toured the Yarden Camp in the Golan Heights.

Bienstock and his family escaped Germany in January 1939 and arrived in the US in April 1940. Five years later, in April 1945, he returned to the war, this time as an American soldier on the USS Wakefield.

Since the founding of the State of Israel, Bienstock’s wish as a Holocaust survivor and veteran American soldier had been to visit active members of the Israeli military on an IDF base.

“I grew up as a Jewish boy in Nazi Germany and when I saw a policeman or soldier, I would turn and run the other way,” Bienstock recounted.

“I was proud to spend two years in the US Army during the war, but I was still a Jew in a foreign army. This is my last chance to see MY army. Today, to see a Jew in uniform serving the Jewish state is a victory, and it feels we have come such a long way,” he said.

During the visit to the base, Bienstock and the other participants, including several of his friends and members of the local Charlotte Jewish community, had an introductory meeting with Yarden Camp’s Eagle Battalion of the Combat Intelligence Collection Corps, which serves as Israel’s eyes on Syria.

Bienstock presented a short movie about his life to the Battalion and spoke to the soldiers about his story and concerns over rising anti-Semitism in today’s world.

Bienstock even had the opportunity to speak in German to one of the soldiers, Cpl. Shawn, who is originally from Germany and currently serves in the Eagle Battalion as a Lone Soldier – one who enlists in the IDF without any immediate family in Israel.

His visit came to fruition with the help of Friends of the Israel Defense Forces (FIDF) and members of his local community, headed by Dana Kapustin.

The Combat Intelligence Collection Corps was adopted by the FIDF Southeast Region as part of the FIDF Adopt-A-Brigade Program.

In 2019, FIDF supporters formed bonds with the soldiers of 10 brigades and 75 battalions, squadrons, and flotillas.

For just $10 per month you can bring the gospel to 1,000 homes. Join us as media missionaries! GIVE NOW
VIEW COMMENTS
« Plunging to New Lows? What Ireland’s Election Means for Irish-Israeli Relations Song in Arabic Lauding the Slaughter of Jews Goes Viral with Over 11,000 Uploads »