A Miraculous Recovery After Dying in Childbirth | GOD TV
Faith 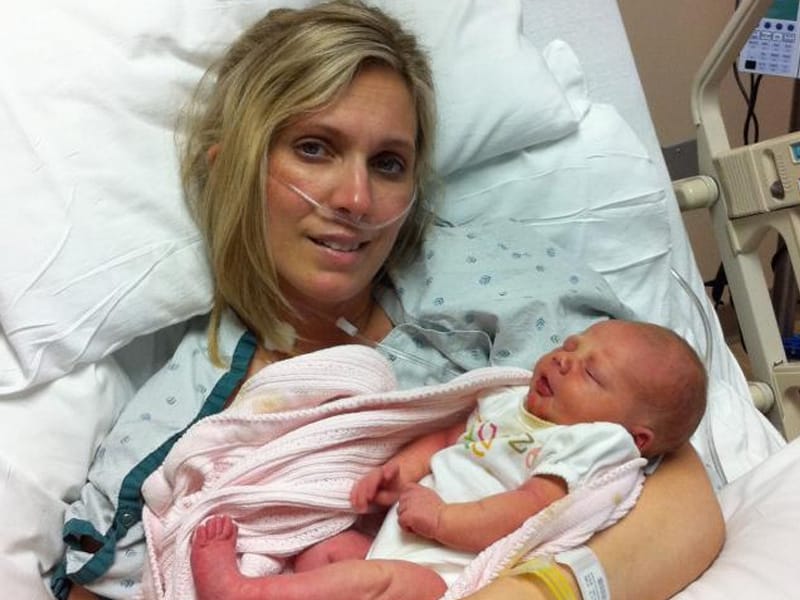 A woman went through a miraculous recovery after dying in childbirth. Melanie Pitchard lived to tell this amazing story of God’s awesome power.

Melanie shared her miraculous recovery story with Life Site News entitling it ‘The day I died…with my unborn daughter still in my body’. It’s more than a ‘miraculous recovery’, it is a PRO-LIFE, PRO-PRAYER, PRO-JESUS testimony.

Melanie’s Miraculous Recovery in Her Own Words:

On July 28, 2010, I delivered my child in the maternity ward of one hospital, only to wake up days later in the ICU of another hospital across town, not knowing how I had even gotten there. Shocked, I sat and listened as my family told what had taken place during the past three days. I tried to recall them. But I had no memory. I drew a blank.

The following is a story handed down to me from my husband and many others about my untimely death and miraculous survival.

While I was in the hospital preparing to deliver my baby girl after 39 long weeks, I signaled to the nurse that something was wrong. I was light-headed and felt somewhat nauseous. I felt as though I was going to pass out. The nurse attempted to reposition me and try to determine the cause of my light-headedness. There was no indication from my vitals that something was amiss.

Then I slumped to my side, apparently having what seemed like a mild seizure. My husband, who was standing at the end of the bed, witnessed my heart rate and blood pressure flash zero on my monitors. Our unborn child’s heart rate began to plummet precipitously. My skin had turned a deep blue. I was not breathing and had no heart rate. I had suffered cardiac arrest. I was clinically dead, and my baby was still inside of my body.

Doctors signaled code blow Code Blue and a team of staff whisked me to the operating room (OR). My husband later told me that he prayed in these words:

“God, I know that this is more than I can handle, which means you have a plan and a purpose in this, and I trust you; but please, if it is your will, allow me to hold my wife again.” He said he has never felt more helpless and afraid in all his life.

By now family and friends had begun to congregate and they all grabbed hands and began to pray. Soon after they began to text, email, Tweet, and post statuses on Facebook, asking people to pray for me. The domino effect began to happen. By the end of that day, I was the number one Googled person in Phoenix and one of the top 100 people Twittered about, as the prayer requests went viral.

In the OR, doctors worked feverishly to save both me and my unborn child. Miraculously, we both survived this initial insult.

After our baby was delivered via C-section, my husband went to see our daughter in the nursery, not knowing if I was dead or alive. As he wiped the tears from his face, the nurses asked him the baby’s name. “Gabriella,” he replied, the “heroine of God.”

A nurse told my husband that after repeatedly using the defibrillator and beginning CPR they had been able to get a faint heartbeat. I had been without oxygen or a pulse for around 10 minutes. They spent over an hour and a half trying to resuscitate me.

The head of the ICU told those gathered that I had likely experienced an amniotic fluid embolism (AFE), which is usually fatal. The doctors had stabilized me but did not believe I would survive and encouraged my family to say their ‘goodbyes.’ 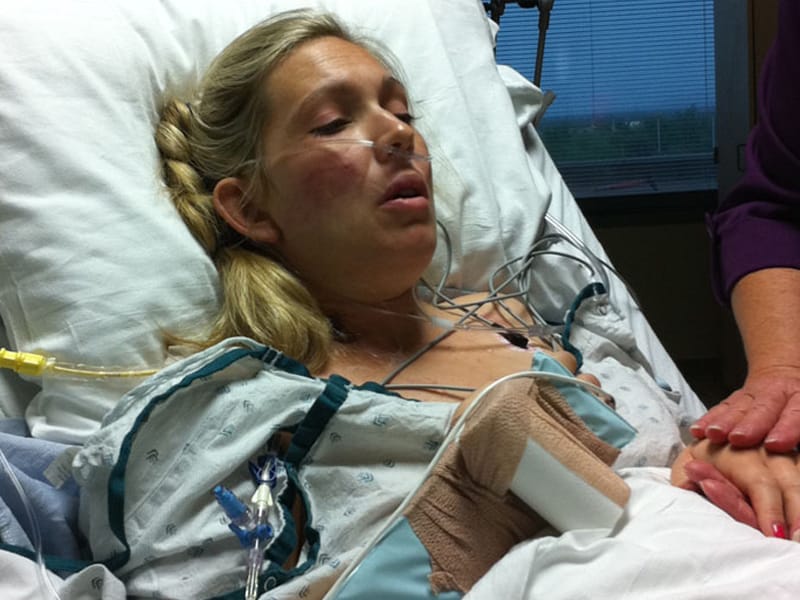 My husband came to my bedside. He took hold of my hand and said: “I love you; I will always love you. Brady and Gabriella are beautiful and love you. If you have any fight left, then fight. Despite my hopes, promise me that you will follow your guardian angel wherever he leads you. Where he leads you will be where God needs you.”

From there, things went from extremely bad to worse. I received two blood transfusions and was going into DIC, a condition of erratic blood clotting. While performing the emergency C-section doctors had accidentally cut an artery, so they had to perform another emergency surgery to stop the bleeding.

Miraculously, I survived this surgery as well, but because the doctors found five liters of blood in my abdomen, they had to pack down my belly (simply put, they stuffed my belly full of towels to compress the bleeding). As a result, they could not close my abdomen, so I was still open with an increased risk for infection for over 12 more hours.

Because of heart failure, my “ejection fraction” was only 5% (normal is between 55% and 65%). Basically, my heart was barely pumping. My lungs had failed and a respirator was breathing for me at 100%. I was still unconscious and doctors thought that even if I did survive I would be neurologically impaired. I was transferred to another hospital an hour away in extremely critical condition. This hospital had an ECMO machine, which works for the heart and lungs.

“For better or for worse; in sickness and in health.”

Our friend, who is also the priest that witnessed our vows at our wedding, was with my husband at the second hospital. He said to Doug, “Wow when you got married, this is what you said ‘yes’ to. For better or for worse; in sickness and in health.”

The doctors at the new hospital wanted to perform another surgery to remove the packing from my open abdomen and stitch me up. But just before doing this, they withheld some of the sedation to more accurately assess my neurological state.

As Doug entered my room with my sister, he saw that my eyes were open and looking around. “Hey babe,” he said, without hesitation. I turned and he looked at me and my eyes began to well up with tears. It was clear to him that I was neither brain-dead nor impaired.

Worried that I may not make it through the operation, they showed me a photo of Gabriella. I began to cry. Momma bear must have come out because I began to twist and turn to get out of my bed. They sedated me once more and wheeled me off to surgery. For the first time, my family felt some optimism, even though the odds of my surviving the surgery were slim.

However, the surgery was successful, and from that point, a miraculous recovery began to unfold. Within the next 24 hours, I was weaned off of all medications, except for pain medication. I was breathing on my own.

Doug entered my room and sat next to me. He tells me that I touched his face and said, “Hey babe, how are you?” He laughed and kissed my hand and cried.

He said he cried for joy and thanked God for this grace. I Praise Him! 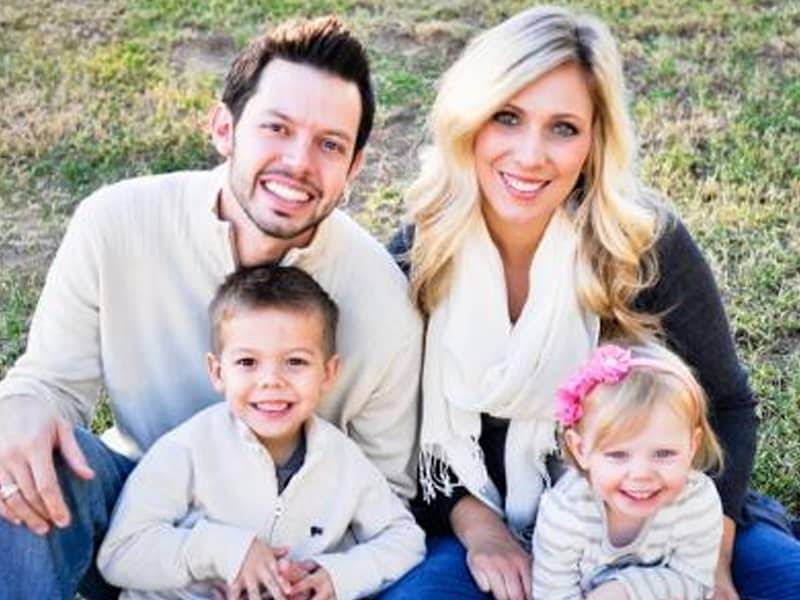 Although I have no memory of this incredible event in my life, I am grateful to be alive and to hold my husband and children in my arms daily. I am thankful for every Facebook post, Tweet, and articles written and posted, who reached out and asked others to pray for me, a stranger.

Words cannot express my gratitude for the multitude of prayers that covered me throughout this traumatic event. I am happy to say, the prayers worked! Thanks to the hands of doctors, nurses, many blood donors, and an ever-merciful God, Gabriella and I are alive and well and I have made a full recovery.

It has been almost four years, and there isn’t a day that goes by that I don’t thank the Lord for allowing me to survive something very few live to talk about.

I thank the Lord for inspiring me to choose a pro-life hospital. I thank God for allowing Doug, Brady, Gabriella, and me to be a family again and for allowing me another opportunity to speak of God’s infinite grace, mercy, and love for all of us.

God has the power to take us from the depths of darkness, even the darkness of death, and bring us to the light, and for that, I praise Him!

For just $100 per month you can bring the gospel to 10,000 homes. Join us as media missionaries! GIVE NOW
VIEW COMMENTS
« When Will I See My Answered Prayer? A Miracle in Indonesia. Hero Pilot ‘Heard God’s Voice’ And Saved Hundreds »