BREAKING
Cancer Patient Survives A ‘Death Sentence’ & Receives A Surprise From Jennifer...
TikTok Kid Preacher Feels God In His Prayer Time; “I Am Not...
“Jesus Appeared To Me Twice So That This Message Will Be Delivered...
Home Articles A Myanmar Nun Kneels Between The Police And Protestors Amid The Myanmar Chaos 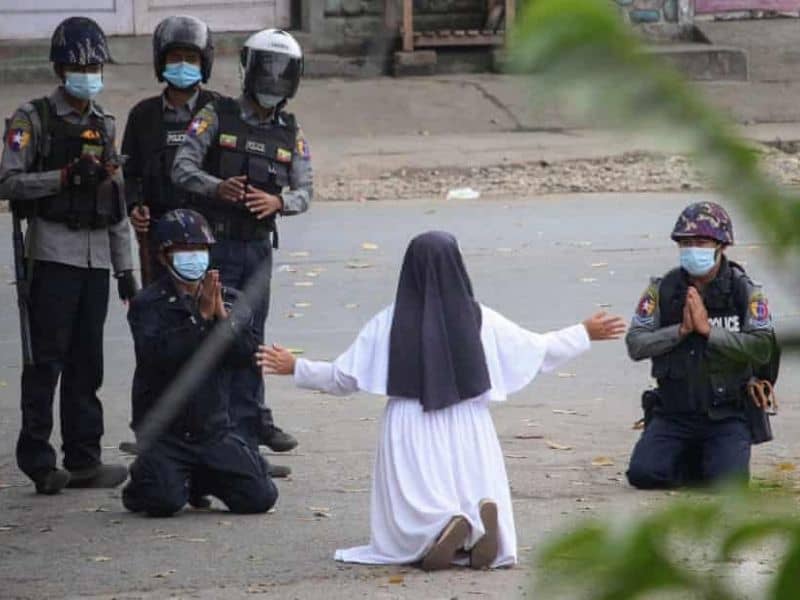 A video showing a nun kneeling in the streets went viral as she intervened between the police and the protestors in Myanmar. She attempted to stop the violence by her peaceful demonstration.

Sister Ann Rose Nu Tawng is an ordained sister of St. Francis Xavier congregation. In the middle of the ongoing chaos in Myanmar, she risked her life to plead in front of the authorities.

In her white robe and black habit, she spread her arms as she approached the police with their armor on and shields up. She then knelt down and cried.

“I knelt down, begging them not to shoot and torture the children. But, to shoot me and kill me instead,” she said.

She added, “I begged them not to hurt the protestors, but to treat them kindly like family members. I told them they can kill me and I am not standing up until they give their promise that they will not brutally crackdown on protestors.”

The violence and continual unrest in Myanmar compelled the nun to take action. Since February 1, the country has suffered when the military detained civilian leader Aung San Suu Kyi.

Riots have filled the streets, and the military has been using force, teargas, rubber bullets, and live rounds. As a result, some protestors have died during the incident.

The 45-years-old nun and her team received support from the senior officials to clear the road on that day. But then, shootings happened. Many got injured while two were killed.

“We heard loud gunshots,” she recalled. “The children panicked and ran to the front. I couldn’t do anything, but I was praying for God to save and help the children.”

“We need to value life. It made me feel so sad.”

She decided to run outside and confronted the police. She had prepared to die for the Church, for the people, and for the nation.

Let us pray for our fellow brothers and sisters in Myanmar and that God’s sovereignty breaks out in their midst.