A Rocky Road To Prime Minister In Israel 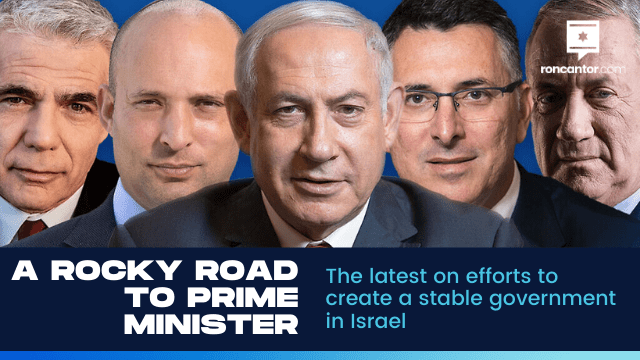 After Israel’s trip to the polls last week, no clear winner has emerged for the post of Prime Minister, yet again. In the wake of no clear path to victory, leaders of three parties are working on a plan to form a “national healing government” and boot Benjamin Netanyahu from power after twelve years.

Yair Lapid, Naftali Bennett, and Gideon Sa’ar and their parties have formed the so-called “change bloc.” The partnership is based on their mutual desire to oust Bibi (Netanyahu) and to address the economic and governmental instability gripping the nation in the aftermath of three years without a budget, plus the pandemic and resulting high unemployment.

The trio’s plan is to form a temporary government, where Lapid and Bennett would alternate being Prime Minister for one year, giving Israelis a break from the election cycle quagmire.

The golden number in Israeli politics is 61—that’s the number of seats needed in the Knesset (parliament) in order to form a government. The “change bloc” has a total of 30 seats, the same as Bibi’s Likud party. The road to 61 is filled with potholes—the ideological gap is wide between either the pro- or anti-Bibi sides and the Arab parties. Mansour Abbas, the head of the Islamic Ra’am party, holds five seats and is a potential kingmaker. He is expected to make an announcement later this week as to whether he will join with Netanyahu or Bibi’s opposition. (Of course, the far right, religious Zionist party [six seats], who most Israelis see as racist, have already declared that they will never sit in a government with Islamists.)

Netanyahu has been quietly working behind the scenes since the election, but his political future remains murky. While Bibi has done much to strengthen Israel’s position on the world stage, at home, he has left a trail of embittered, burned former associates, many of whom form the opposition to him now. And, in less than a week, he is set to go on trial for possible corruption and bribery.

Defense Minister Benny Gantz, head of the Blue and White party, has been warning the “change bloc” and others to not fall for Netanyahu’s promises of a future coalition.

Gantz wrote on Twitter, “Warning to Naftali Bennett and Abbas, Bibi is using you. Netanyahu’s “April plot” to overturn his trial is alive and well. There is only one way to prevent this (Netanyahu evading trial) – the formation of an honest government without Netanyahu and the appointment of an agreed-upon Knesset Speaker from the change bloc.”

Next week, on April 5, the newly elected members of the Knesset will give President Reuben Rivlin their recommendations for Prime Minister, and Netanyahu is scheduled to go on trial.