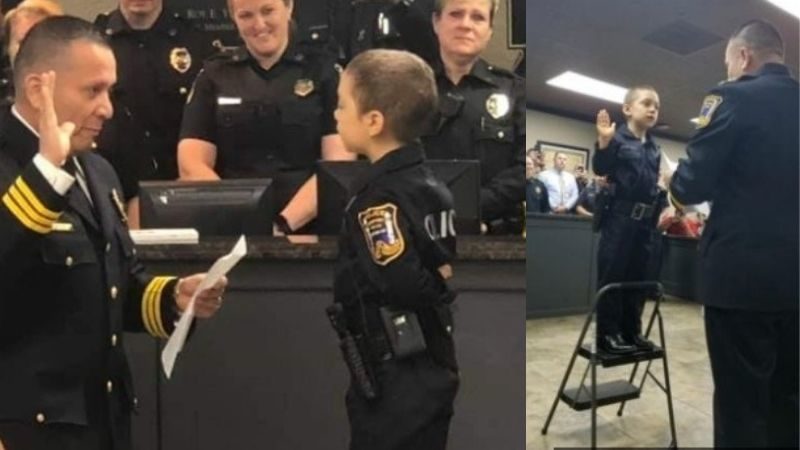 Abigail Arias is a 6-year-old girl from Texas who is terminally ill with cancer. She has always had a desire to become a police officer. Her dream came true when she was officially sworn in as an honorary officer in Freeport, Texas.

Abigail was diagnosed with a Wilms Tumor in 2017, a kind of cancer that starts in the kidneys. According to her family, her diagnosis is terminal, as her mother shared in an interview with KTRK.

“They basically said it’s time to enjoy some life. Extremely tough. We cried for a few weeks,” said Ilene Arias.

However, her father says they are trusting God. “We’re strong in our faith. We believe in God. The doctors can say what they say medically, but we know that God is the one that has her destiny in His hands,” Rueben Arias said.

Abigail’s dream of joining the police

Abigail has always dreamed of working in law enforcement and that dream came true when she met Police Chief, Raymond Garivey of Freeport Police Department at a “Pancakes with Santa” event last December.

“We know God has her destiny in His hands.”

“She’s an inspiration…I don’t know if I could do what she does every day. It’s just a blessing we came across each other’s path,” Chief Garivey said.

“Her terrific smile and will to keep fighting ‘the bad guys’ inside of her — I wanted to make her dream come true. You have to meet her to really understand what a great and inspiring young lady she is,” he added.

Chief Garivey, was inspired by Abigail’s story, to help the young girl to fulfill her lifetime dream by first reaching out to the Cop Stop company to get a custom Freeport police uniform specially made for her.

Then, in February, she was sworn in as an honorary police officer together with the support of her loving family, and a gathering of many police officers.

“She is no doubt God-sent. Her story brought police officers from all over today into one room, and it was a magical moment for all who were in attendance,” Chief Garivey said.

That oath was more than just making a little girl’s dream a reality. Abigail has become a symbol of hope for people fighting against cancer.

For just $100 per month you can bring the gospel to 10,000 homes. Join us as media missionaries! GIVE NOW
VIEW COMMENTS
« Iran to Increase Uranium Enrichment; Netanyahu: ‘We Are Not Surpised’ Father Of The Bride Stops Wedding Procession, Grabs Stepdad To Walk Their Daughter Down The Aisle Together »