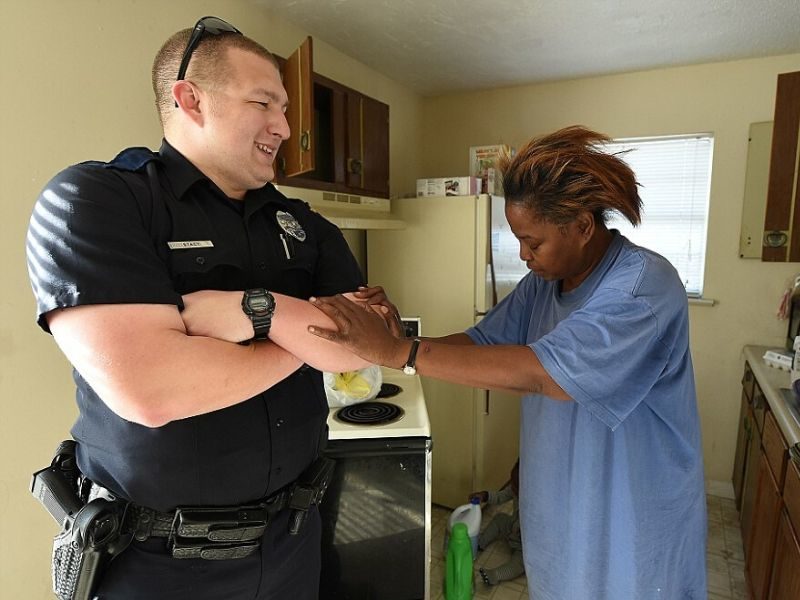 An Alabama police officer caught a mother stealing five eggs to feed her hungry family. Instead of arresting her, the cop surprised her by buying her food and giving her a hug.

Helen Johnson relies on her monthly welfare check of $120 per month to support her family’s needs. She lives with her two daughters, niece and two grandchildren aged 1 and 3 years old.

However, the money was lost in the mail one day in December of 2014. They had not eaten for two days already when Johnson decided to buy eggs with only $1.25 in her pocket. She pursued to take five eggs even though she was .50 cents short.

A worker caught her as the eggs broke inside her pocket. She quickly confessed her wrongdoing. The store owners called Officer William Stacy on the scene. He made Johnson wait as he negotiated with the store owner.

The 47-year-old mother admitted that she readied herself for jail while waiting.

“She started crying, she got very emotional and was very apologetic,” Stacy said. “She said, ‘I need help, Officer Stacy. I need to put food in my babies’ stomachs.’ That’s what got me. That’s what hit me the hardest… I ran in, bought the carton of eggs, came back outside and handed them to her,” he continued.

Man Builds A Mini Home For A Homeless Elderly Woman

A passerby was able to capture the moment on phone and uploaded it on the social media. The viral video moved many residents and made them donate toys, food, and clothing to the police station for Johnson’s family.

Two days after, Officer Stacy along with his colleague delivered truckloads of gifts to Johnson in her house.

“This is manna from heaven. This is the best thing that has ever happened to us.” Johnson revealed that her cabinets have never been that full.

Officer Stacy’s kindness has forever changed Johnson’s life and she could never thank him enough.

For just $100 per month you can bring the gospel to 10,000 homes. Join us as media missionaries! GIVE NOW
VIEW COMMENTS
« Is ‘Trance Evangelism’ Coming Back In Vogue? Being Present »