Amid Tensions: Bolton in Jerusalem for Talks on Syria, Iran | God TV
News 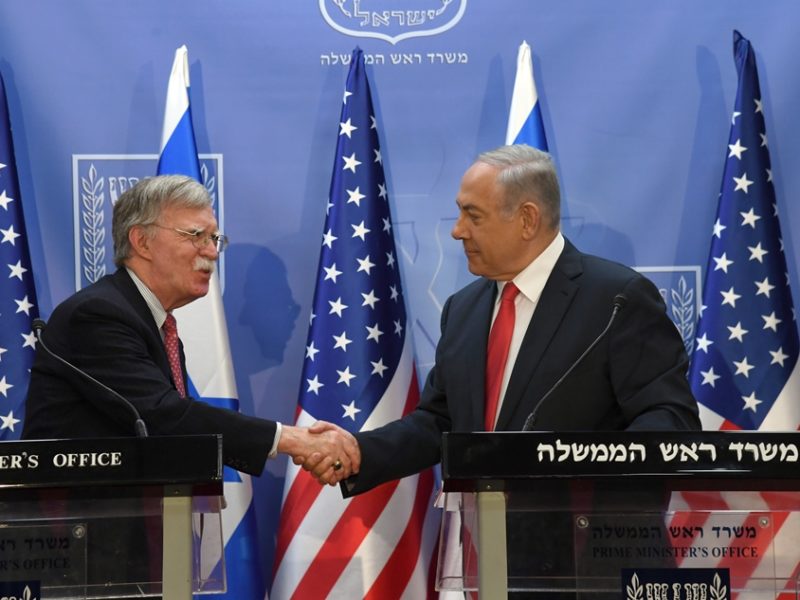 Prime Minister Benjamin Netanyahu on Sunday met with US National Security Adviser John Bolton at the Prime Minister’s Office in Jerusalem as tensions in the Middle East are the highest they have been in years.

Bolton is in Israel for what Netanyahu termed as “a historic and unprecedented” meeting in Jerusalem between the national security advisers of the US, Russia and Israel.

The three parties are expected to focus on Iran’s presence in Syria, which is perceived as a threat to Israel, and the latest developments on Iran’s aggressive conduct in the region. Russia, President Bashar al-Assad’s patron, has significant sway on the goings-on in the war-torn country.

At a joint press conference, Netanyahu praised the Israel-US alliance, which is “at an all-time high.”

Bolton’s visit is “an opportunity to strengthen that alliance even further, as well as to discuss how best to address the enormous challenges we face together in the Middle East, particularly at this sensitive time,” the Israeli premier stated.

“The mere fact that such a high-level meeting is taking place between the great powers – the United States of America and Russia – here in Israel I think is unprecedented. It speaks loudly about the nature of Israel’s standing among the nations, and in this case among two of the greatest nations on earth,” he noted.

Netanyahu expressed confidence that “it’s possible to both find common ground and chart a path forward that will help promote security and stability in the region, particularly in Syria.”

Touching on the mounting tensions following the downing of a US surveillance drone by Iranian forces last week, Netanyahu said that while Iran’s aggression in the Middle East is not new,  “what’s new is that now, thanks to crippling American sanctions, Iran is facing unprecedented economic pressure as a result of its aggression. So I was pleased to hear President Trump make clear yesterday that pressure will continue and that pressure will increase.”

President Donald Trump stated Saturday that the US was planning to set another series of sanctions against Iran’s economy, while earlier on Friday he canceled an air strike against Iranian targets.

“I never called the strike against Iran “BACK,” as people are incorrectly reporting, I just stopped it from going forward at this time!” Trump tweeted.

“Neither Iran nor any other hostile actor should mistake US prudence and discretion for weakness. No one has granted them a hunting license in the Middle East,” Bolton said in Jerusalem.

The US army in the Middle East “is rebuilt, new and ready to go. We are ready to act against Iran,” he warned.

The US has dispatched further troops to boost the 54,000 already serving in the area.

For just $100 per month you can bring the gospel to 10,000 homes. Join us as media missionaries! GIVE NOW
VIEW COMMENTS
« Arab Factions Oppose Bahrain Summit; US Issues Travel Advisory Focus On The Family is Helping Families Thrive »