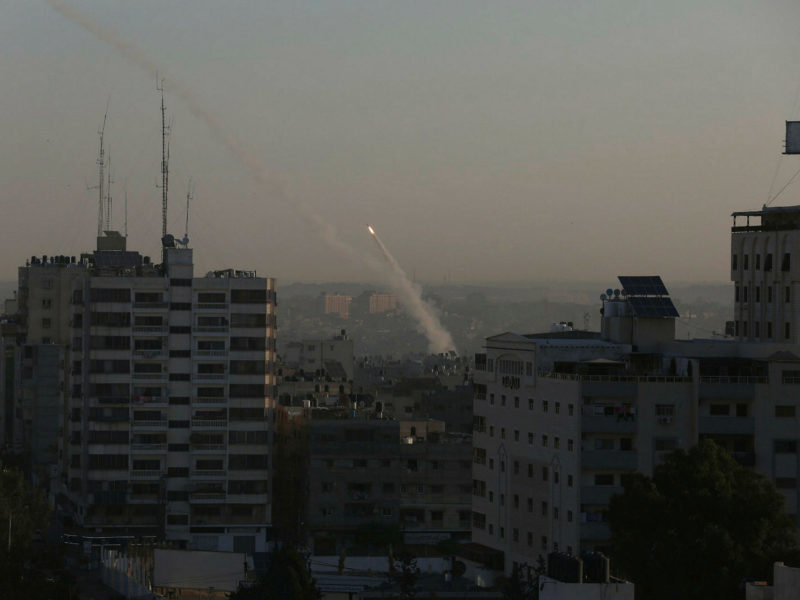 Human rights NGO Amnesty International on Tuesday accused the IDF of attacking a Gazan human rights watch office, when in fact, the rocket that struck the building was launched by the Islamic Jihad terror organization at Israel and misfired from within Gaza.

Writing on Twitter, Amnesty International issued a statement “strongly condemning the attack on the Palestinian Independent Commission for Human Rights whose office in Gaza was struck by an Israeli missile earlier this morning.”

The organization added that “strikes targeting civilian buildings is a violation of international law.”

Videos posted on the social network by Reuters and Fox News journalist Trey Yingst showed the missile aimed at Israel flying towards the north-eastern border of the Gaza strip before striking the building of the Palestinian Independent Commission for Human Rights (ICHR).

“Israel did not strike this building. A rocket misfired from Gaza. I was across the street when it happened,” Yingst wrote on Twitter.

Following the publication of the video material and backlash against Amnesty International on Twitter, the NGO told followers that “conflicting information is circulating about what exactly hit the [ICHR] office in Gaza and where the attack came from.”

Amnesty then called for “an impartial investigation into this incident and other events in Gaza today.”

In a subsequent statement, the organization criticized the Israeli government for failing to grant the NGO access to Gaza since 2012, adding that their lack of resources in the strip “makes verifying the source of such attacks a harder task.”

The incident does not constitute the first time in which Israel has been falsely accused of violating international law following the terrorists’ misfiring of rockets aimed at Israel.

In May, a news piece spread online reporting an Israeli airstrike had killed a baby and its mother in the Gaza strip. The IDF was subsequently accused of war crimes. A TPS exclusive investigation revealed, however, that the 14-month-old baby and the woman had been killed by an Islamic Jihad rocket which had misfired and failed to clear the Gaza border.

TPS had managed to secure the information through intercepted Hamas communication on social media. “There is no doubt that the baby’s death has nothing to do with the enemy’s [Israel’s] planes”, the Hamas report stated, explaining that the rocket had landed “inside the family’s home due to a technical failure, and prematurely exploded. There is a claim that the technical failure was caused by low-grade explosives in the rocket.”

For just $100 per month you can bring the gospel to 10,000 homes. Join us as media missionaries! GIVE NOW
VIEW COMMENTS
« More Than 250,000 Students “Stands For Christ” On Football Fields Across The US IDF Launches Surprise Drill in North »