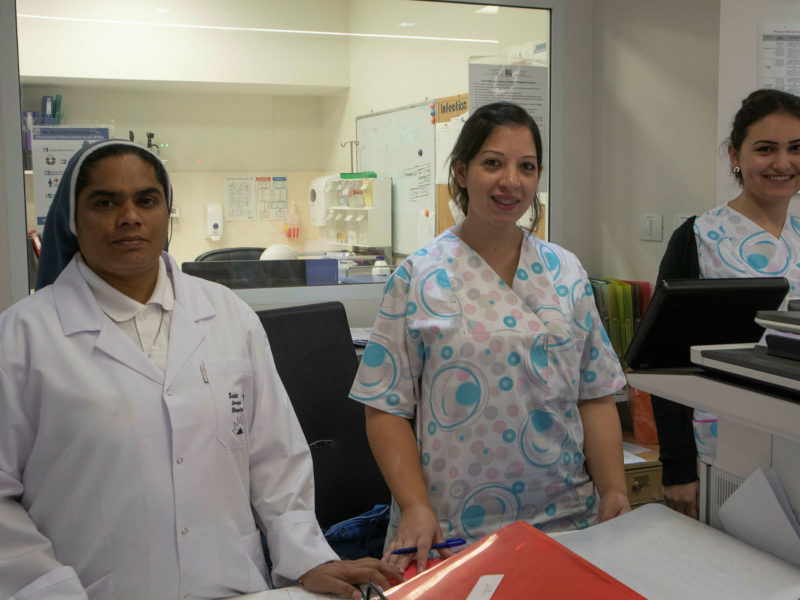 After touring almost every hospital in Jerusalem in search of the best place to give birth to their firstborn daughter, Nehama (32) and Haim (34) , a young Jewish couple from Jerusalem, decided on St. Joseph Hospital, a small Palestinian hospital located in the Sheikh Jarrah neighborhood in East Jerusalem.

“My mom heard about St. Joseph by chance from a friend a few months ago, and she suggested I check it out,“ said Nehama between one contraction and another in the hospital delivery room. “I chose to give birth here because there is a much more intimate atmosphere than in other hospitals. Also everybody is calm here, I feel the nurses and the doctors really care about me, I am not one [patient] out of hundreds,” she said.

Nehama is not alone, her story represents an expanding phenomenon in Jerusalem and even farther afield.

“I already helped dozens of Jewish girls to give birth here,“ said Tali Mansdorf, Nehama’s Doula – a non-medical midwife who assists before and during childbirth –  while massaging Nehama’s feet to relieve the pain caused by the contractions. “There are couples who come from Haifa and Tel Aviv, particularly in the last year. The couples choose St. Joseph because the staff is very cooperative and supportive, in particular, they have a very natural approach to the birth.”

The St. Joseph Maternity Department houses 25 beds, with an average of 280 deliveries a month, 40 of them Jewish, and the rest Muslim and Christian. The staff is composed of Jewish, Muslim and Christian midwives and is the only hospital in Jerusalem that has the equipment for a water birth.

“I had a water birth two days ago, and everything was just perfect,” said  Esther Antopolsky (23), a Jewish Orthodox woman from Jerusalem, “the doctors and the nurses were very supportive, the delivery room was pleasant, the nurses put on some calm music…. It just was perfect,“ she said.

“We have many friends who gave birth here, the doctors believe in natural birth and this was very important to us“ added Esther’s husband Yosef, while sitting with his wife in the dining room of the postnatal department, where the patient can choose from a variety of dietary options, including kosher.

“Although this is a small hospital, they have the best equipment, in case of complications. Sometimes there are some difficulties with the language, as not, all the nurses speak good Hebrew, but we get along well and feel that we are being treated well,” said Nehama’s husband, Yosef.

Touring the departments, you can not ignore St. Joseph’s high standards: maternity rooms, operating rooms, all equipped with the latest technology. The hospital has even a beauty salon where women after birth can receive a manicure, pedicure, and a new haircut.

“The aim of my department is to give the best possible care to women with the least intervention,” says Dr. Samir Asfour, Director of the Maternity and Gynecology Department at St. Joseph, “I believe in normal delivery, it is the best for the interest of the women, but we have specialists 24 hours a day, and if there are complications  we can handle it in a few minutes,” he added.

According to Dr. Asfour the hospital has an 8% rate for cesarean birth, which is less than the recommended rate of the World Health Organization, which considers the “ideal rate” for cesarean sections to be between 10% and 15%.  “In some countries, the Caesarian birth reaches even 70%,” Asfour said.

More and more Jews are choosing this small Palestinian Hospital, which was founded in 1948 by the  French Congregation of the Sisters of St. Joseph of the Sacred Heart.

“We are a small hospital, with 155 beds divided in a radiology department, gynecology department, maternity department, a baby care unit, an intensive care unit, an ambulatory cardiac unit, surgical department, and internal medicine,” said Mr. Jamil Koussa, the General Director of St. Joseph, “our hospital has agreements with all Israeli  and Palestinian Authorities Healthcare providers. Every patient is welcome here,” he added.

For Koussa, the mission of the hospital is not only to cure the patients but to also build bridges of peace, “Our mission is to start peace at the people level, to prove that we can live together. Women from settlements – Ma’ale Adumim and the Golan Heights delivered here. Before leaving, they told me it was the first time they had contacts with Palestinians and discovered there is room for peace,” he said.

In a city such as Jerusalem, where high tension between Arabs and Jews are prevalent, the St. Joseph Hospital is a real island of sanity, “a proof that there are still places where the Arab-Israeli conflict stays outside,“ says Koussa.

For just $100 per month you can bring the gospel to 10,000 homes. Join us as media missionaries! GIVE NOW
VIEW COMMENTS
« Prophetic Word: Women of Destiny Arising Caught on Camera: Little Kid Revived By Rescuers After Almost Drowning »