‘And Then The Rocket Fire Intensified:’ One Israeli’s Life Under Fire | God TV
News 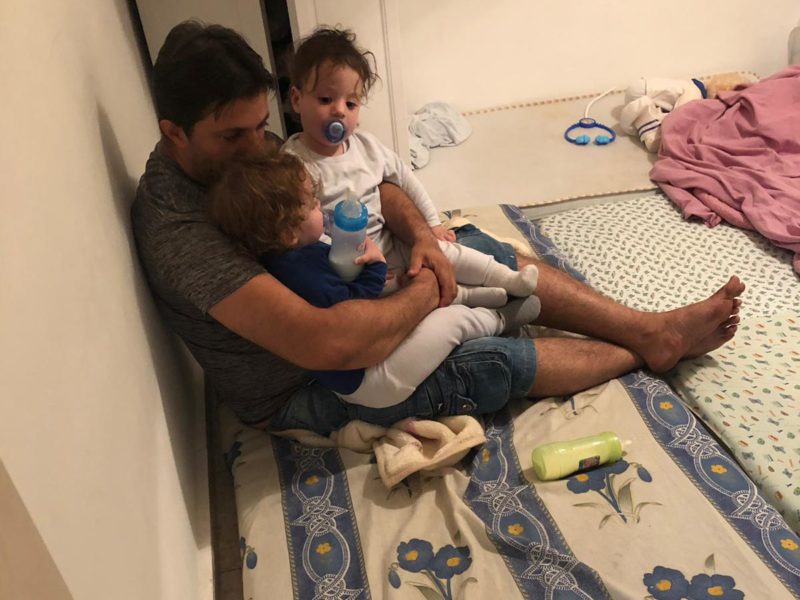 Alya and Tommy Shapiro were planning to celebrate Liam’s fourth birthday in Ashdod on Saturday when their plans were violently disturbed by barrages of rockets launched by terrorists from Gaza.

They understood that celebrating in Ashdod was no longer an option, so they decided to move further north with the hope of finding peace there.

Liam was subsequently sent to Jerusalem, while Tommy, Alya and the twin toddlers Eliana and Arian returned home to Ashdod. As they were entering the city they came under a massive barrage of rocket fire and saw the explosions in the sky caused by the Iron Dome’s interceptions of the incoming rockets. The babies were shocked.

Tommy, 39 and a lawyer, initially thought the violence would end shortly, like in previous such incidents, but he soon learned that this time was different. The intensity, volume and insistent fire were nothing he had previously experienced.

Seeking shelter, he entered the secured-room in his apartment and did not leave until the fire ceased over 24 hours later. Alya, a nurse, was required at the hospital, so he spent the next day playing with the two babies and calming them a much as possible.

In a conversation with TPS, he described initial feelings of resilience which, in time, were replaced with those of intense fear and a sense of helplessness.

“You hear the rocket explosions all the time. I was in a secure room, but I did not feel safe,” he said.

He was especially upset by the violent events his babies were exposed to.

“A two-year-old baby is experiencing what I am. They experienced anxiety-provoking situations, saw the rocket interceptions. You can see they are having a hard time processing all this,” he shared.

While facing constantly intensifying fire, Tommy shared on Facebook a clip of a rocket attack on his city with the caption “Hello world, that’s what me and my kids are going through at this moment in Ashdod.”

“More than 450 rockets fired from Gaza towards Israel throughout the day, No one condemned Hamas and Jihad bloody terrorists actions against civilians!!! Israel is shelled, the world is silent!!!!” he added.

While a ceasefire has come into effect Monday morning, Tommy believes it’s only a matter of time before they find themselves under attack and running for shelter again.

“There is no ceasefire, only a pause for a very limited amount of time,” he said. “I cannot accept this.”

“It will return, and we will have to cope again,” he said.

He says he understands that there will be no peace in the Middle East, that this has been the reality since the establishment of the state, but he does demand of the government that it acts to ensure that the intervals between rounds of violence are longer than they are now, actions they have yet to take, in his opinion.

“The government should act to ensure that we have more breathing time,” he demanded.

For just $100 per month you can bring the gospel to 10,000 homes. Join us as media missionaries! GIVE NOW
VIEW COMMENTS
« Israel Conveys Condolence to Russia After 41 Killed in Plane Crash Israel’s Memorial Day. The Jewish People Remember All Who Have Fallen »