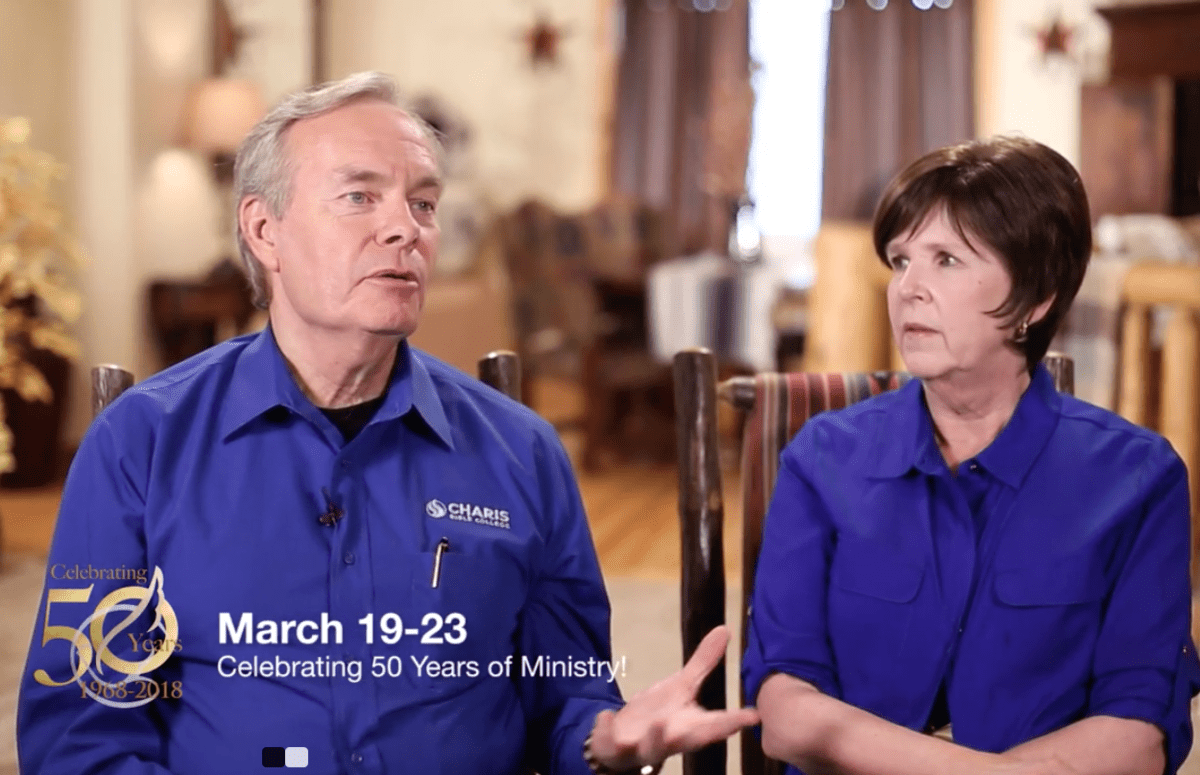 Andrew Wommack celebrated 50 years of ministry on March 23rd, the day when everything changed in his life in 1968 and he started serving Jesus. Andrew and his wife Jamie haven’t stopped for a minute since and this is clear for all to see through the work of Andrew Wommack Ministries.

From 19 – 23 March Andrew’s series, The Gospel Truth on GOD TV documented his five decades of ministry and it was amazing to see all God has accomplished. The fruit of Andrew Wommack Ministries is abundant. Today it is a far-reaching organisation with a huge campus in Colorado Springs.  Charis Bible Colleges have trained thousands of Bible students and AWM has an A-Z of offices around the world from Australia to Zimbabwe. Andrew is also well known on TV and especially on GOD TV where The Gospel Truth has aired for many, many years.

However, Andrew Wommack Ministries didn’t start this way… And, it’s has been so refreshing to watch the 50th Anniversary specials  and see some of the struggles Andrew and Jamie had to endure to birth their ministry. It’s a timely reminder to us that genuine ministry growth takes time, faith and patience, with God stretching us every step of the way. We often hear that we shouldn’t despise the day of small beginnings and that is clearly evident as you see the history of Andrew Wommack Ministries.

Andrew started out in ministry in 1968 following his time serving in the Vietnam War. He was already acquainted with what he calls ‘the school of hard knocks’ and starting a ministry would often be challenging for him and his wife. It’s incredible to look back now and see the little houses and apartments he and Jamie lived and worked in and to see their first church. Back then they both had such a humility before the Lord and it’s something they have never lost.

Their’s was a passion to share the truth of the Gospel very often to people who told them that faith and healing were ‘of the devil’. Despite this type of opposition. Andrew would faithfully travel across state lines teaching in Bible studies in the early days. How he loved to share his cornerstone messages about God’s Grace, living a balanced faith-filled life and the Believer’s Authority. Many were saved and the ministry grew steadily but success did not happen overnight. This did not stop Andrew from sharing the Gospel freely.

The Bible teacher who gave away millions of cassette tapes

Back in those days, there was no Internet, no MP3 downloads, YouTube videos or anything like that. But there were cassette tapes and Andrew became something of a media pioneer using recordings of God’s Word on cassette to build up a powerful media ministry,  first on tape, then on radio and then on TV. And the amazing thing was that he gave millions of tapes away. His heart was not for the income he could get from mass duplication, but rather the joy of knowing that God’s Word can change people’s lives, if only they  have anointed teaching material in their homes to listen to.

Andrew Wommack Ministries was officially incorporated as an organisation in 1978 and the tape ministry was a key part of its growth. It started with Andrew copying tapes for people himself until he finally had to employ somebody to duplicate 50 tapes a day and soon it was 500 tapes a day. Many thought he was crazy because he gave away such a vast amount of tapes for free, and especially since he didn’t really have the funds to do it. But, Andrew was determined to get God’s Word out and he stuck to his guns! He modelled sowing and reaping in his own dynamic way and God sure blessed their sacrifice.

For 50 years Andrew has inspired people and he has kept his testimony intact. As Pastor Duane Sheriff, a close associate of Andrew says, “For 50 years there has been no cause for gossip or scandal, Andrew is the most loyal man I’ve ever met.  He is an example of Christian leadership in the home, in the church and in the ministry.”

Congratulations to Andrew and Jamie on this milestone accomplishment of Andrew Wommack Ministries’ Year of Jubilee. We at GOD TV feel privileged to have played a role in taking Andrew’s teachings to a wider audience through TV and it’s been wonderful to see so many people in the UK support him and his annual Grace and Faith conferences in Telford which we air each year.

Over and above Andrew’s on-air presence on GOD TV he spoke at our Winter Celebration in Norway and Summer Celebration in Plymouth and many lives were touched through his teaching gift. Many of out partners still have very fond memories of these two special events. For others 7.30 am or 7.30 pm each weekday is their most-watched slot on GOD TV as they tune in for the Gospel Truth.

“We appreciate the ministry of Andrew Wommack. He is one of our longest-running, most faithful air time sponsors and his series has changed many lives,” said GOD TV CEO, Ward Simpson. “We encourage our viewers to stay tuned to Gospel Truth and the Grace and Faith Conferences on GOD TV.”