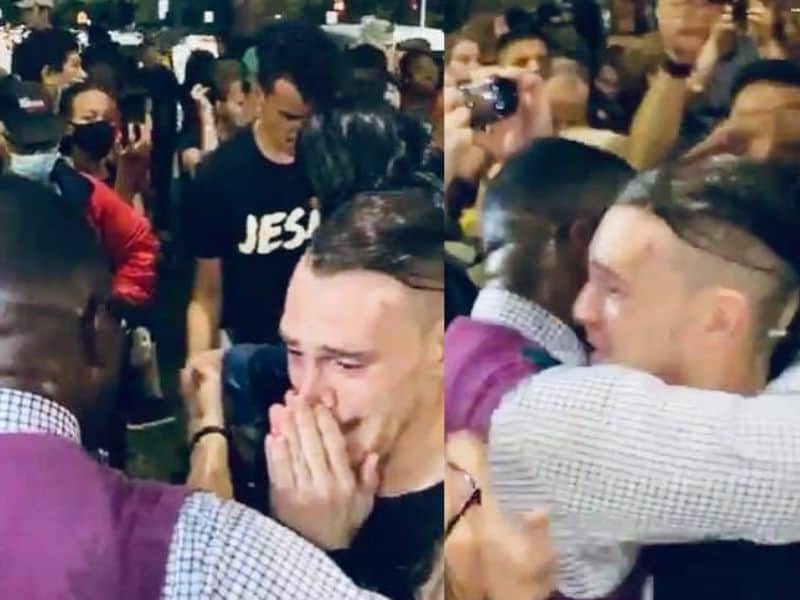 During a worship event in Chicago, Illinois, an angry protestor came to disturb the worshippers. But he was undone when he encountered the overwhelming love of God. Right then and there, he surrendered his life to Jesus.

Sean Feucht has been touring across the nation, raising the banner of Jesus and holding worship services. The worship leader has posted testimony after testimony of changed lives happening during every service.

People from every background, including satanists, prostitutes, and addicts have come to the event with no expectations, and yet left the place transformed and with a newfound relationship with their Creator.

Angry protestor gets baptized on the spot

This time, God amazed an angry protestor. When Sean and his team came to Chicago, a man showed up yelling and screaming. But a local pastor confronted him with the fierce love of God.

Sean wrote, “In every city, we’re witnessing the wildest miracles I’ve ever seen in America! Many are happening to those coming to agitate, bring harm and shut us down!”

“This guy showed up in Chicago screaming, yelling and trying to stop the worship (which was already acoustic as the police were ordered by the mayor to ban us from using our equipment????).”

He continued, “A local pastor (in purple shirt) met this man’s intense anger with the fiery love of God. Every wall came crashing down as he wept, gave his life to Jesus and then got baptized (last pic) in the back of a truck bed that night!!!!”

He declared that when the church rises up to meet the crisis on the land, miracles become normal. More and more of God’s children will go back home to the Father. “The presence and love of God are secret weapons amidst the craziness right now,” he said.

He noted that he would post more testimonies so that the fame of Jesus will go viral across the land.