BREAKING
Lay Aside The Old Self
Ben And Jerry’s Staying In Israel, But Founders Aren’t Doing The “Chunky...
Israel Has a New Prime Minister
STAND WITH UKRAINE
Home Articles “Another Historic Day In The Middle East:’ First Official United Arab Emirates Delegation Lands In Israel 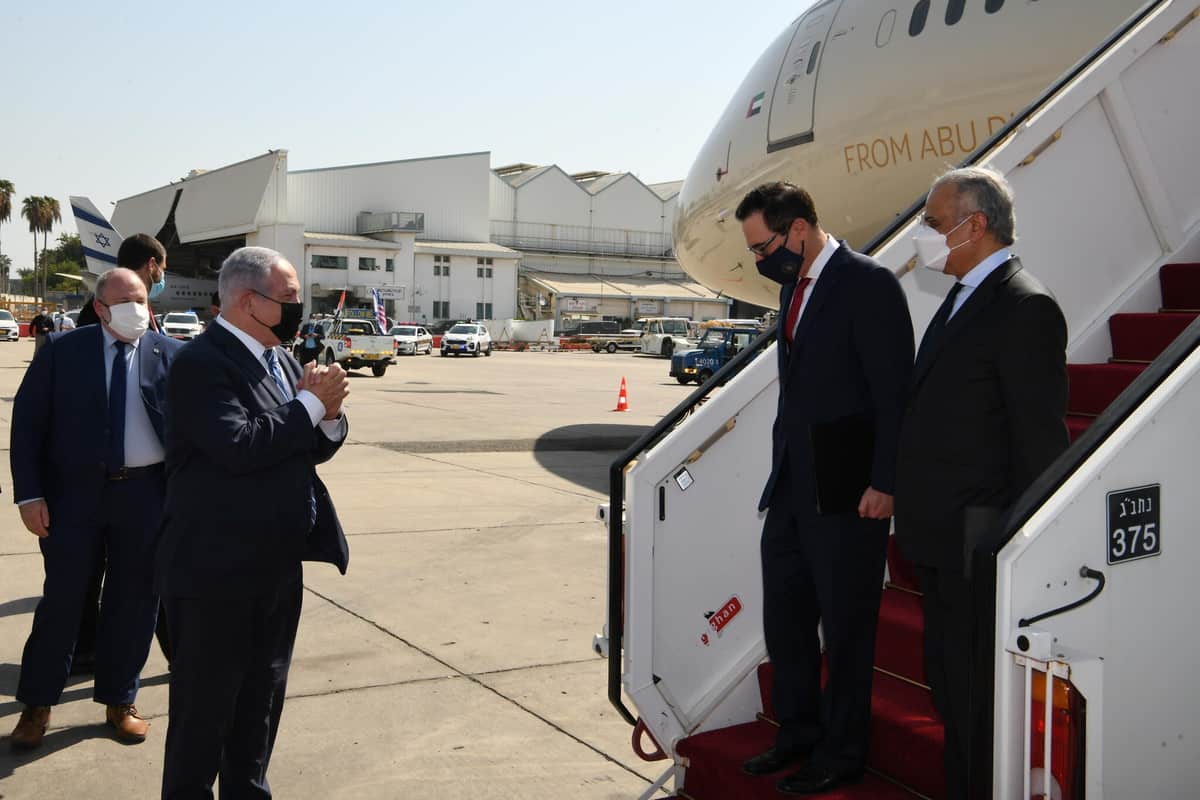 Etihad flight ETD8014 landed at Ben Gurion Airport at 12:00 noon, bringing with it the delegation led by UAE Minister of State for Financial Affairs Obaid Humaid Al Tayer, and accompanied by US Secretary of Treasury Steve Mnuchin.

“Another historic day in the Middle East! May this visit be the first of many,” tweeted Israeli Foreign Minister spokesperson Lior Haiat.

Television channels in the Emirates and the Gulf broadcast the landing of the delegation and the signing ceremony live, using the feed provided by Israel’s Government Press Office.

“We are making history today, and many generations will remember the visit. This is the first time the Emirate government and Israel have signed agreements and it will benefit peace. The Middle Eastern countries need to understand that what we are doing is for the benefit of all the peoples of the region,” said Netanyahu, who received the delegation.

Netanyahu welcomed the establishment of the $3 billion Abraham Fund together with the US and UAE, which was unveiled on Tuesday and which will focus on regional economic investment and development.

Al Tayer said that “the UAE is playing a pioneering role in the Middle East and North Africa, especially in terms of funding and innovation. I am pleased that we have made great progress between the governments of the two countries since the signing of the peace agreement.”

Minister of Finance Katz signed an agreement on defense and the encouragement of investments.

In addition, Shlomo Mor Yosef, Director general of the Administration of Border Crossings, Population and Immigration, signed a visa waiver agreement with Emirati diplomat Omar Saif Ghobash. The agreement to cancel entry visas is attracting a lot of attention in Israel and the UAE as it is an unprecedented agreement that does not appear in the peace agreements with Jordan and Egypt.

Israeli Minister of Science and Technology Izhar Shai signed a Memorandum of Understanding in the field of science and innovation. The pact calls for a joint committee that will work to create mechanisms for research and commercial cooperation between the countries.

“The signing of the agreement is really good news for academia and the Israeli innovation industry. Cooperation with the UAE is a significant force multiplier that will bring with it economic, research and diplomatic achievements that will help strengthen the bond between Israel and our new friend,” Shai said.

“It is no coincidence that scientific and technological cooperation is at the heart of talks with the UAE and Bahrain, as the innovation industry is a strategic asset of the State of Israel, which we are responsible for cultivating. ”

The editor of the Al-Ittihad newspaper, Hamad Al Kaabi, said during the broadcast of the trilateral summit that “the agreements open new horizons for the youth and the younger generation in the Emirates and that a new phase in the region is being created.”

The delegation’s visit came after an Emirati plane landed at Ben Gurion Airport on Monday to inaugurate the new air route between the two countries.

A series of events have taken place since the signing of the US peace agreement on September 15, including the meeting between Israeli Foreign Minister Gabi Ashkenazi and his Emirati counterpart Sheikh Abdullah bin Zayed Al Nahyan in Berlin and their shared tour of the Memorial to the Murdered Jews of Europe and its Holocaust museum in Berlin, the arrival of UAE cargo ships at Haifa’s port, a series of official visits and economic agreements, and meetings between ministers and senior officials.

Economic relations have already begun to develop and an Emirati delegation visited Israel this week at the invitation of Netafim, a leading Israeli company in the field of irrigation solutions, and also met with Alon Schuster, Minister of Agriculture.

The delegation also met with members of the Agricultural Research Organization, the Volcani Center, as well as companies in the fields of milk production, water and digital agriculture.

At the end of this visit, four memoranda of understanding were signed between the two countries.

Israel, the United Arab Emirates (UAE) and Bahrain signed a historic peace agreement at the White House on September 15, the first agreement to be signed between Israel and an Arab country in 25 years.