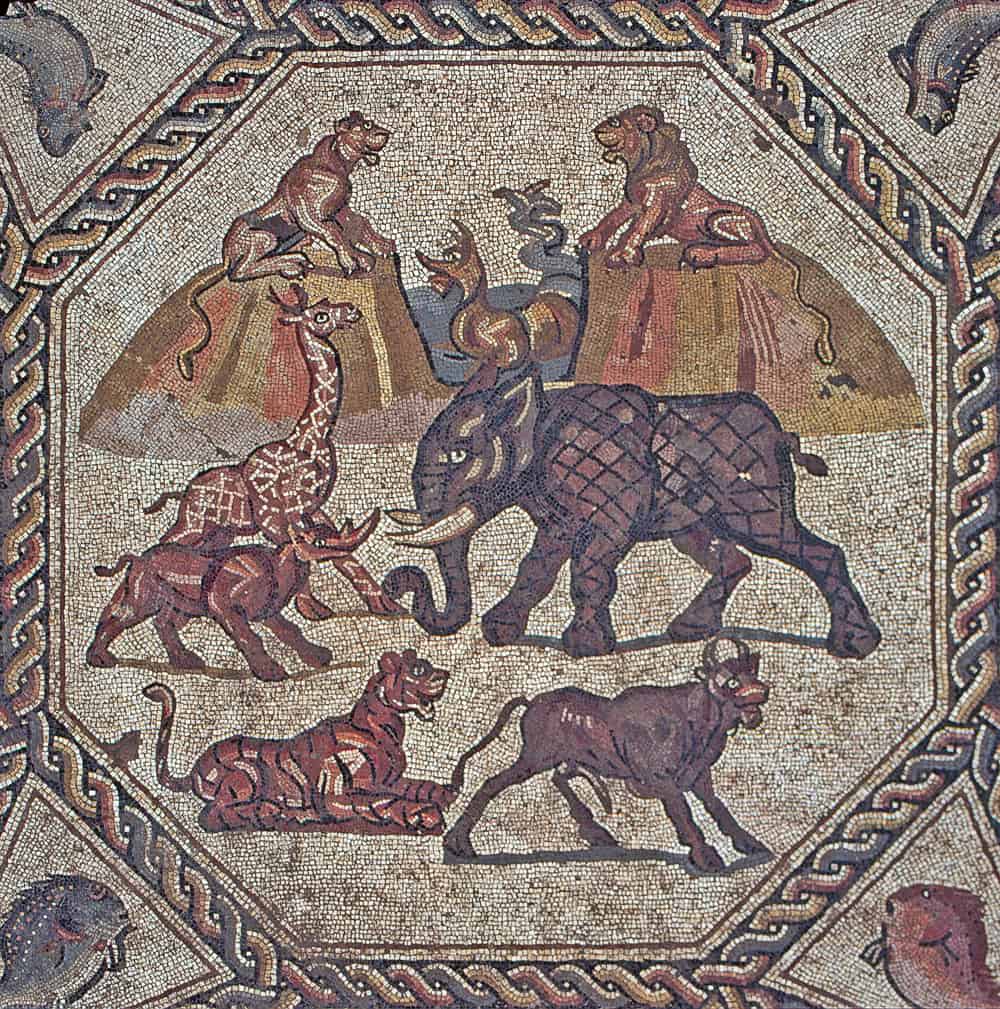 Archeologists unearthed a rare, multi-colored Roman mosaic dating back about 1,700 years, during excavations this month in Lod, the Israel Antiquities Authority announced on Sunday.

The impressive mosaic was uncovered during excavations ahead of construction of a Visitors Center to house the famous Lod mosaic, thought to have come from a reception room of a luxurious Roman villa in Lod which was accidentally discovered in 1996 and has since toured the most important museums throughout the world.

Like the 1996 mosaic, the new find portrays a range of wild animals including birds, fish, a giraffe, elephant, tigers, and lions. It does not contain human figures.

“The figures, many similar to the figures in the earlier mosaics, comprise fish and winged creatures. A fairly similar mosaic was found in the past in Jerusalem, on the Mount Zion slopes. The Lod mosaics, however, do not depict any human figures that are present in the Mount Zion mosaic,” Israel Antiquities Authority director Dr. Amir Gorzalczany said in an IAA press release. “It is very likely that the same artist produced both the mosaic or that two artists worked from a similar design,”  continued Gorzalczany.

The newly uncovered mosaic appears to be an additional reception room of the villa discovered in 1996.

“The excavations at the site exposed a villa that included a large luxurious mosaic-paved reception room triclinium, and an internal columned courtyard, also with mosaics, and a water system. We found evidence for Mediterranean luxury that characterized the Roman empire, including attributes such as fresco wall paintings,” said Gorzalczany.

If so, Gorzalczany said the villa should be much larger than what has been thought until now.

“The discovery raises new questions: How large was the building? Did the villa comprise several reception halls? Where were the private living rooms? Was there a second story? These issues may be resolved in future excavations,” he said.

Speaking by phone with TPS Gorzalczany said the IAA is aware of the existence of other mosaics of this kind in the area, but they are under buildings that are currently inhabited. That makes further excavations impossible.

“Lod was an upper-class neighborhood town during the Roman and the Byzantine period, in particular, the neighborhood where the mosaic was found. There are probably other villas to be discovered The importance of Lod as an urban center decreased following the Islamic period in the 8th century when Ramle became the new government center. We are lucky that the houses (in later centuries) don’t have deep foundations, so the ruins of the ancient luxury villas have been particularly well preserved.”

The Visitor Center, a joint initiative of the Shelby White and Leon Levy Foundation, the help of Lod Municipality, the Lod Economic Development Corporation, and the Israel Antiquities Authority, is set to open in 2020. It will display the Lod Mosaic in a place that respects the idea of the ancient villa in which they were initially set.

Written by Mara Vigevani/TPS  |  Photo by courtesy of IAA