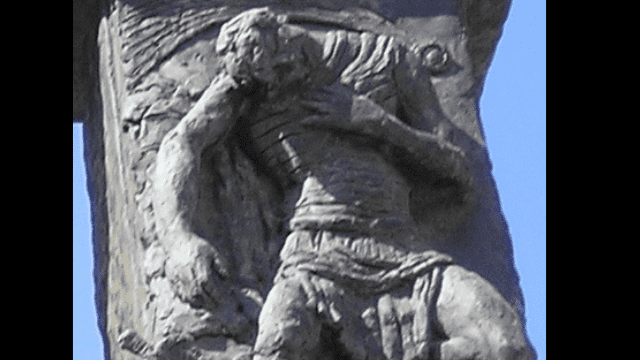 It’s true what they say—history repeats itself. And recent artifacts unearthed in Israel provide a rare glimpse into Israel’s struggles and triumphs against ancient foes who have terrorized the Jews in the Holy Land. Israeli archaeologists have uncovered a 3000-year-old inscription with the name “Jerubbaal” on it, as well as two “freedom” coins from before and after the destruction of the Second Temple 2,000 years ago.

“The most exciting discovery is an inscription, which is from 1100 BC., the time of the Judges. We know very little about this period from the archaeological point of view, and we (didn’t) have any meaningful inscription from this period,” said archaeologist Yossy Garfinkel. He is a professor of archaeology at Hebrew University in Jerusalem. Garfinkel and fellow archaeologist Sa’ar Ganor with the Israel Antiquities Authority (IAA) are leading the dig at Khirbet el Rai.

In the book of Judges, Jerubbaal was the name Gideon’s father gave him after he knocked down the altar of Baal. With miraculous aid from God, Gideon and a small army of 300 men later defeated the Midianites, who were terrorizing Israel at the time (Judges 6-8 ). Although it’s not known for sure if the broken jar handle found in the ancient, in-ground storage bin belonged to the famous Judge of Israel, first-year archaeology student Ben Tsion Yitschoki, who was excavating at the site, is excited about the discovery.

“(Garfinkel is) doing a great job proving that the Bible is actually a historical story and not just mythology. I believe there are already many finds, many things that do match the Bible more than (the critics) realize.”

At another site, in the Benjamin Region in today’s West Bank, a team of archaeologists from Bar-Ilan University has discovered two coins that date back 2,000 years, to the time of the apostles.

One coin dates to 67 CE before the destruction of the Second Temple in 70CE and around the time when the apostle Paul was martyred in Rome. The tiny coin on one side bears the inscription in Hebrew—”Freedom for Zion”—and a vine leaf. And on the other, it has an image of a goblet and the words “Year Two.”

The second coin appears to be from the time of the Bar Kochba revolt. About 70 years later. On the one side, the coin has a palm branch encircled by a wreath, and the inscription in Hebrew reads Freedom to Jerusalem. The other side bears the image of a musical instrument and the name Shimon, the leader of the revolt.

The Bar Kochba revolt was the third and final war between the Jews and the oppressive Roman Empire. The rebellion failed and resulted in a mass exile of Jews from Jerusalem and Judea.

Money, and in particular, creating a currency, has always been an expression of sovereignty. And coins were often minted to commemorate great events, which has been helpful to us in dating the currencies. As Donald T. Ariel, head of the Coin Department at the IAA, said, “Minting coins meant to be free.”

For just $100 per month you can bring the gospel to 10,000 homes. Join us as media missionaries! GIVE NOW
VIEW COMMENTS
« Want To Learn About The Ancient Lands Of Israel and Judea In Biblical Times? God’s Word For You Today: Peace Comes Through In Prayers »