BREAKING
Israel-led Team Solves Mystery Why Lightning Strikes Fewer Times Over The Ocean...
Tourism In The Holy Land Is Soaring Back Up To Pre-Pandemic Highs
Lapid Speaks Directly To Palestinians—Offers Them “Another Way” Out Of The Ongoing...
Home News As Putin Limits Democracy, Russian Jews Are Increasingly Moving To Israel 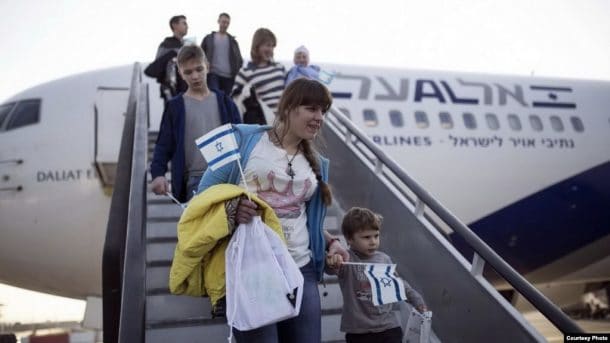 An exodus of Jews emigrating from the Former Soviet Union to Israel has dramatically increased over the past four years amid fears that the former communist superpower is becoming less democratic.While the economy and crime may also be a contributing factor, some have coined this growing phenomena “Putin aliyah” citing a significant deterioration in freedom under current President Vladimir Putin, according to a report in the Jewish Telegraph Agency.The numbers are shocking: since 2015, nearly 40,000 Russian Jews have made aliyah compared to only 36,784 in the entire decade prior. Last year 10,000 Russian Jews arrived in Israel and this year the number will likely reach 15,000, Israeli officials estimate. Russia has been clamping down on the media, political opponents and religious entities for years now, according to human rights groups. But Jews are certainly feeling the effects. In the last decade, for instance, the government helped open a Jewish museum in Moscow and synagogues around the country while and kosher restaurants are opening and Jewish cultural events are helping Jews feel more at home. Yet at the same time anti-Semitic acts have dramatically increased recently. In one incident, nationalists broke into a synagogue to conduct an illegal search for evidence of “a terrorist plot.” Anti-Semitic allegations have also been infused into court cases involving Jews and some Jewish textbooks have been banned as well. In another example, a dozen rabbis who were foreign nationals were kicked out of the country. Rabbi Boruch Gorin, spokesman for the Federation of Jewish Communities of Russia, said the expulsion was not anti-Semitic in nature, but was aimed at a wider crackdown on foreign clergy.Nevertheless, Jews are streaming out of Russia, at the very least in search of a more open and democratic society.“When I start a family, I want my kids to grow up in the free world,” Grigory Zisser, 32, told JTA about his decision to make aliyah. Dima Eygenson, 39, agreed.“Ninety percent of Russians really love Putin. They admire him, they think he’s doing the right thing, focusing on hating minorities and gay people,” he said. “The other 10 percent, to which I belong, don’t feel free to say what we think about this.”