Astounding Truths About The Birth Of Christ | God TV
Faith 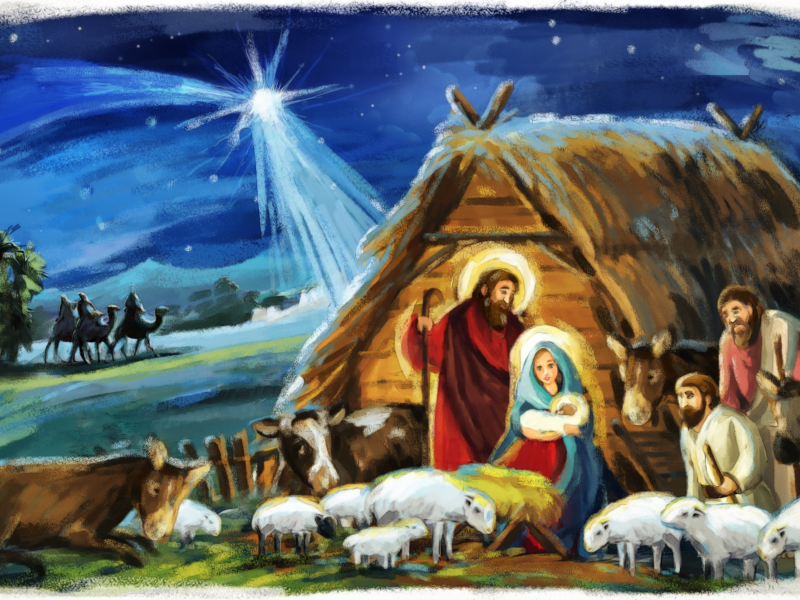 As people all over the world around this time remember the birth of our Lord and Saviour Jesus Christ, I want to share a word of encouragement with you from the Book of Luke and some of the astounding things it details about that wonderful night.

The Promise of the Lord

In Luke 2, Joseph and Mary go up to Bethlehem because of the census. Mary is pregnant with Jesus, and the time soon comes for the child to be born. The town is overrun with visitors because of the census and with there being no room in any of the guest houses, the couple and new-born child are somehow staying in a manger. One of the greatest miracles in history had just taken place, and yet only a few were aware of it. However, the lives of some shepherds living in the fields nearby were about to change forever.

This is how Luke describe the angelic visitation to invitation:
“And there were shepherds living out in the fields nearby, keeping watch over their flocks at night. An angel of the Lord appeared to them, and the glory of the Lord shone around them, and they were terrified. But the angel said to them, “Do not be afraid. I bring you good news that will cause great joy for all the people. Today in the town of David a Saviour has been born to you; he is the Messiah, the Lord. This will be a sign to you: You will find a baby wrapped in cloths and lying in a manger.”

Daytime is a time when everyone seems to be busy, active and doing something. People are alert and pay attention to whatever offers a reward. Night, however, is a time where most people have gone to sleep and are inactive, and not even aware of what is taking place around them. There are spiritual times and seasons in the earth like this. There are times when it seems like everyone is paying attention to what is important and everyone is busy with the work of God, looking to Him for a reward. But there are also times when it seems that many have gone to sleep and are not shepherding or stewarding their responsibilities as they once did, or even aware of what is going on in the realms of the Spirit.

The visitation of the Lord came to those who were not asleep during the night season, but who had instead stayed awake to fulfill their duties. They represent those who remain consistent and faithful in what God has given them to do even when the company and crowd are gone, and when it seems spiritually dark and cold. At a time when the glory of the Lord had only been revealed to a few, the Lord looked for those who had distinguished themselves by their faithfulness to reveal Himself to. This visitation is a prophetic picture that contains an important message for the Body of Christ today.

Revelation For The Responsible

Shepherds watch over flocks and the preservation of their flocks depends on their continual attention, care and diligence.

They represent our mandate to carry out the responsibilities that God has given us. Every one of us has someone or something to shepherd or steward. Whatever your sphere of influence there are things which need your care and attention if they are to be preserved. Among a flock are sheep of all different ages – lambs, and young and old sheep. Likewise, they will be things that God has given us to steward from long ago, and new things that He has given to us more recently. We must be careful to watch over all He has given, and not to despise or neglect either the new or old, but to be careful to do all things well in His sight.

At a time when the glory of the Lord had only been revealed to a few, the Lord looked for those who had distinguished themselves by their faithfulness to reveal Himself to. They had set themselves apart by their consistency and faithfulness, and so the Lord set them apart by a visitation. They had not gathered to see signs and wonders but to fulfill their duties. However, while they were fulfilling their duties, the angels gathered to show them signs and wonders. It is not a coincidence that this all happened during the time of the census.

A census is a time when people must account for themselves and their whereabouts. At the time when the Lord comes to look, be found in the right place taking care of what He has given you to do! Position yourself for a visitation!

Be Surprised But Not Afraid

When the glory of the Lord shone on the shepherds, they were terrified. Although they were deep in the Presence of the Lord, the angel had to speak to them to tell them not to be afraid. Then the crowd of angels spoke peace to them. When you are working hard to be faithful to God during the challenges of a night season it can seem like He is very far away, and a sudden visitation of the Lord can be a great surprise!

Although you are doing all you can to honour and serve Him, you may not be expecting Him to show up. The visitation to the shepherds is a reminder to the Body of Christ that God’s eyes are on His faithful. He knows when and how to surprise and reward His people with His Presence and glory. Even in the night season, do not lose sight of the faithfulness and goodness of God and expect Him to move in the unexpected so you can respond well at your moment of visitation.

The shepherds were filled with joy and praise from the visitation. This was a complete turnaround. Moments before the visitation, as they kept watch in the night, they were probably tired and cold. It would have seemed like they were in the same cycle. However, the promises of God have a time of fulfillment. When the moment of birthing came, they were the ones who were awake and available to see it. Because of this they entered a joy that only a few were able to experience.

Their joy and gladness didn’t stop at the visitation of the angels but from the habitation. They didn’t settle at the angelic interruptions in their routine. But the invitation to see what the swaddling cloth was harbouring; habitation of the divine.

It was only when the realisation of the prophetic words of the ages of old found their fulfillment in the One in the swaddling cloth. They were then commissioned into their generation, to change the narrative of their lives and their world.

The swaddling cloth is representative of God’s preserving grace and providential care over the promise! Over the prophetic word, your pasture land, and the presence you need to endure! It’s here to shield, save and sanctify the pure for a time and era to come. This era is NOW! The shepherds wasted no time in hurrying along to see the unravelling of what their hearts had been beating for. It was all wrapped in a very simple yet rich swaddling cloth!

What they saw within the swaddling cloth ensured thecity of David wasn’t just in name and fables alone. But it was the tumultuous sounds of glee and joy became a witness that the land had finally found its fulfillment. They could now echo the psalmist and say ‘this one was born here’ (87:5).

This coming year you must go from your reasonable act of worship to conquering all your fears and entering into what is being preserved by ‘swaddling cloths’ in the Holy of holies of presence. Come out empowered, anointed and commissioned to activate right ownership of regions and territories of what has been long promised.

Set things in order, because your moment of visitation that leads to habitation will fill you with joy indescribable and full of glory. As we celebrate our Saviour and prepare for 2020, survey your flock and every area of responsibility God has given you.

If you’ve fallen asleep, wake up! If you feel tired, take courage your turnaround is coming. Celebrate, because unto us a Child is born, and a Son is given! In 2020, may God’s light and glory come upon you quickly and change things for you forever.

For just $100 per month you can bring the gospel to 10,000 homes. Join us as media missionaries! GIVE NOW
VIEW COMMENTS
« Bethel Moves Towards Memorial Service For 2-Year-Old After Seeking Resurrection Miracle Christmas Miracle Rain Falls On Australia Fires During Christmas Day »