At GA, North American and Israeli Jewry Get Talking About Bridging The Gap | God TV
Israel 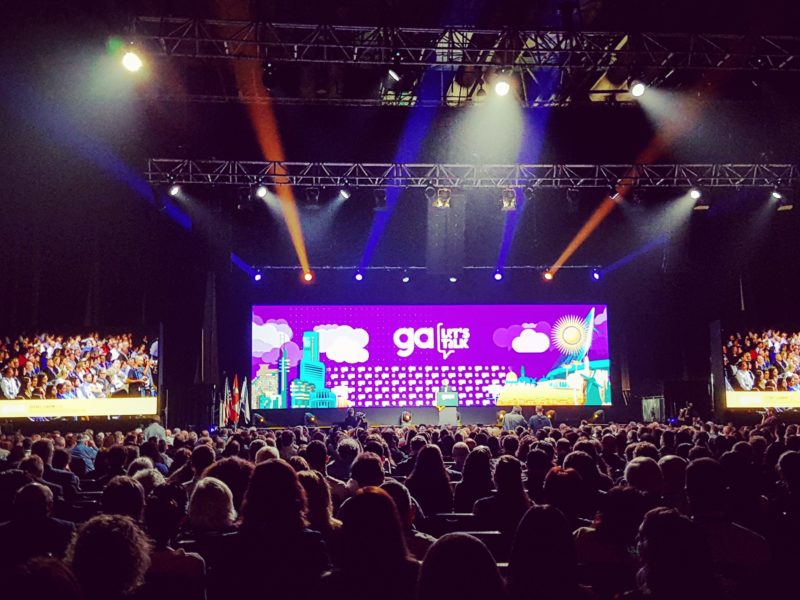 “Let’s Talk” was the order of the day at the Jewish Federation of North America’s General Assembly, taking place in Tel Aviv this week.

Every five years, the General Assembly is held in Israel, and this year the spotlight fell on recent tensions in the relationship between Israeli Jewry and the Diaspora over several contentious issues.

The theme was specifically geared towards creating bridges despite World Jewry coming from various backgrounds and sharing differing opinions.

In the morning’s opening address, Jewish Agency chairman Isaac Herzog said he planned to reach out to all the delegates attending “to advance hundreds of faction-crossing, stream-crossing and continent-crossing dialogues.”

“They will all partake in the internal debates of each of them,” he continued. “We shall learn from one another and learn to appreciate one another – and endeavor to resolve our internal differences – through a new Jewish dialogue. All that I ask all of you here in this room is not to despair and not to give up.”

Herzog added that “If Israel and the Jews of the Diaspora do not seek common ground, in order to courageously confront together the challenges of this new age.

“We are in danger of losing a significant part of the Jewish people,” he said.

Many of the day’s speaker’s echoed Herzog’s sentiments, including 2018 Israel Prize Winner Miriam Peretz, who lost two of her sons in battle.

In her heart wrenching speech, Peretz reminded the audience that “We are one family.”

“Martin Luther King said ‘I have a dream,’ our dream came true,” she said referring to the establishment of the State of Israel. “But now our mission is to work out how all the dreamers can live together and be united… We all share the same history and heritage. Our duty is to pass this heritage onto the next generation.

Arsen Ostrovsky, Executive Director of The Israeli-Jewish Congress (IJC) said that “the Jewish people and the Jewish state are intertwined by an inextricable bond, grounded in a shared history and united by a common destiny.

“Yet at the same time today, we are also seeing an increasing divergence of viewpoints on a range of matters, from our identity as Jews and Zionists, to religion and state, and the peace process,” he explained. “That is why the theme of this year’s General Assembly, ‘We Need to Talk’, is all the more pertinent and the JFNA should be applauded for bringing together thousands of Jewish leaders from both North America and Israel alike, in facilitating this clarion call for action and dialogue, so that Jews both in Israel and the Diaspora have a voice in our shared future.”

Victoria Hammel and Hilla Sorscher, who are both part of the Masa Israel Teaching Fellows program said they were overwhelmed by the many streams of Jews attending the conference. “[The] ‘Let’s Talk’ theme is a great opportunity for me to grow as Jew and meet other Jewish people as well as explore the relationship between Diaspora Jewry, and not only Israeli Jews, but all Israeli citizens of all paths,” Hammel said.

Sorscher said that she was “overwhelmed by how many Jewish people there are and how many people come to an event like this and the amount of social awareness.

“It’s incredible to see how united everyone is. When Miriam Peretz spoke, everyone sympathised with her pain – it was a collective pain,” Sorscher said. “Everyone has their different views, especially politically but at the end of the day we can all sympathize with each others pain because we’re all Jewish.”

Tal Kedmi Winbrom from the Wexner Foundation emphasized that the idea of “Let’s Talk” needs “to be expanded outwards to the rest of world Jewry by those who are here,” attending the General Assembly.

“That’s the challenge – the people who are here and talk about the relationship between North American Jewry and Israel’s Jewry share the same values, ideas and understandings. We have to drill down and connect the dots, we have to share these thoughts and insights with everyone outside of this building. And we can only do that through collaboration and cooperation,” she said.

For just $100 per month you can bring the gospel to 10,000 homes. Join us as media missionaries! GIVE NOW
VIEW COMMENTS
« Eugene Peterson (1932 – 2018) Remembering the Writer of the Message Bible Bride Cancelled Her Wedding, Donated The Wedding Venue To Complete Stranger »