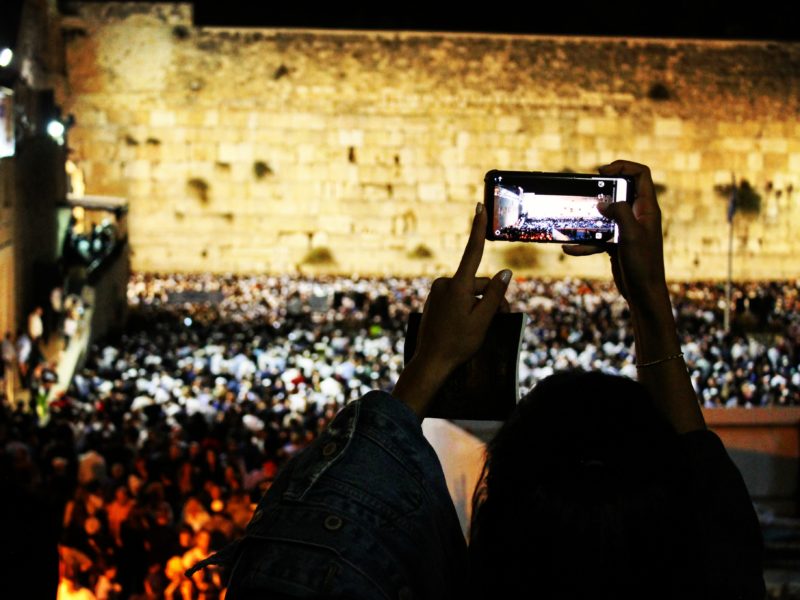 The sound of the shofar was loud and strong. Every few moments a man dressed in white, wearing a Breslov kippah blew into the ram’s horn as people filed through the entrances of the Western Wall.

In the days that run-up to Rosh Hashanah and during the period between the High Holy Days, selichot – communal prayers for divine forgiveness – are recited daily. The catch: The prayers begin at midnight, their words and laments carrying through until 2 a.m.

Despite the late hour, thousands upon thousands of people from all over Israel flocked to the Western Wall to take part in this phenomenon.

From Ethiopian Jews to Secular Jews to Hasidim, Sephardim, Ashkenazim, Yemenite Jews – it was a sea of diversity with some in traditional dress and others wearing black pants, white shirts, black hats, shtreimels, jeans and t-shirts.

As thousands gathered, there was a hustle of activity. On the one side of the plaza, a large group of women congregated and made challah together as the leading women spoke about Rosh Hashanah. They mixed ingredients and kneading the dough while they prayed for the safety of Israel, for healing, a good year, success, blessings – and as each was recited loudly by the leader, the crowd of women shouted “Amen.”

Several women came forward asking for blessings and as they did so, each was given a plastic bag to put over their hand and the opportunity to knead the dough. Some were seen closing their eyes as cries of “Amen” washed over them, desperately hoping for their prayer to come to fruition.

A group of religious Ethiopian Jews, led by one man dressed in a long garment with a turban on his head, sang laments and the group answered loudly in a chorus of sad song, so beautiful it touched a chord within. Although it was dark, a man stood behind him – also dressed in a white garment – holding a beaded green umbrella, sheltering their leader.

Earlier in the evening, tours of all sorts were on offer for visitors who wanted to explore the history of the Old City and its surroundings.

In the Old City square, one man, dressed in pure white and wearing a desert cap, played his guitar and sang about some of the city’s history while explaining to those on his tour the trials and tribulations experienced in the area. Two others held tambourines and hit them softly as the man stood and sang.

Another tour guide danced around his audience showing them pictures and graphs, many a laugh could be heard from the group, while one man could even be heard giving a tour in a poetic language, which almost sounded Shakespearean.

Middle Eastern drums could be heard banging in the distance as the groups moved closer and closer toward the Western Wall plaza. The energy across the plaza was electric, and yet there was still a sense of foreboding, which spread far and wide across the crowds.

As midnight dawned, the thousands began to quieten down. And then it began, as if he were crying before God, begging for mercy – the loud, quivering voice wailed as he said each word of the selichot prayers.

In a chilling chorus, thousands upon voices responded. This continued for hours and not once did the cantor lose his emotion. Not once did the crowd falter as they answered. Some drew out their cell phones, photographing and videoing the rare event and the togetherness of the Nation of Israel.

Tears shined on many faces as the prayers drew to a close and the sound of several shofars billowed once more, marking an end to the spiritual endeavor.

Do you want to be aware of all the latest from Israel and the Middle East? CLICK HERE to Sign up for GOD TV’s new daily newsletter, The Israel Insider.

For just $100 per month you can bring the gospel to 10,000 homes. Join us as media missionaries! GIVE NOW
VIEW COMMENTS
« 6-Year-Old Girl In Choir Steals The Spotlight With Her Adorable Dance Moves Report: Saudi Arabia Purchased Israeli Iron Dome Missile Defense System »