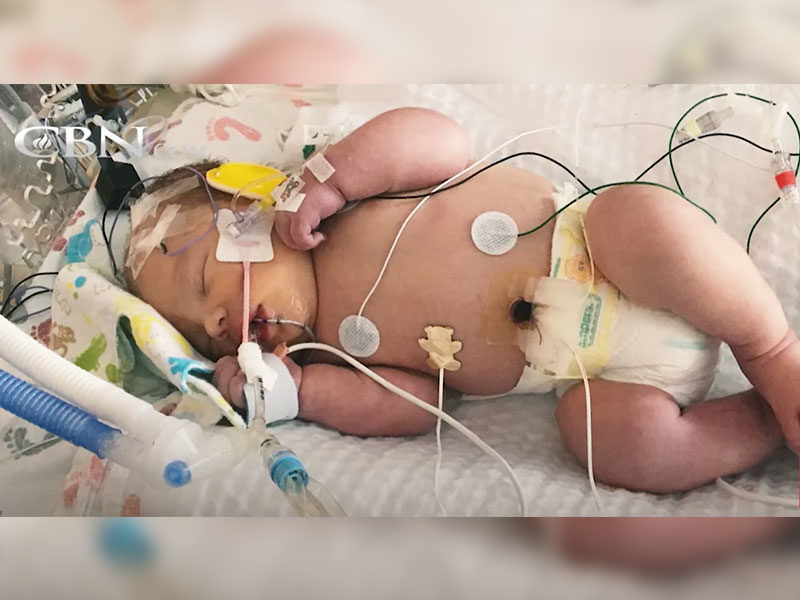 A baby who had been without oxygen or blood flow for 20-minutes survived because of the power of prayer.

Hannah Sheriff was in labor ready to meet her fifth child when suddenly she felt something was not right. The doctors decided to bring her to the operating room and do an emergency C-section. When the doctor opened her up, they found her uterus hemorrhaging blood. And to make things worse, the baby’s heart rate dropped.

The baby boy named Urias John suddenly had no heart beat. They did CPR but he still wasn’t breathing. Urias’ chances of survival was slipping away. But even after the critical 10-minute mark passed, the team kept trying to revive him. They got a pulse but the baby had now been without oxygen or blood flow for 20-minutes.

Jacob, the baby’s father was in the operating room with his wife. There was nothing he could do to help either of them but to pray.

The doctors intubated and prepped the baby to be life-flighted and he was brought to Texas Health Presbyterian, a hospital 80 miles away. Hannah would have to stay behind to heal from her surgery. So Jacob went with his son in the helicopter.

The baby started having seizures when he arrived at the hospital. At the same time the doctor back at the local hospital confirmed that Hannah suffered from placental abruption.

Placed in NICU, Urias was diagnosed with Hypoxic-ischemic encephalopathy brain damage caused by a lack of oxygen and blood. In his case, he would most likely have cerebral palsy.

There was little hope. The doctor said there was only a 40% chance that he would make it because of his severe condition.

“I can’t control anything but I can trust God. I don’t feel it like some emotional thing. It was a determination and a commitment I’m gonna trust God,” declared the faithful father.

The baby was having seizures despite medication. But later that night, his eyes opened. Jacob attended to him, along with the nurse, and pleaded with God to heal his son.

“I just remembered: don’t be afraid. Believe only,” Jacob said.

Nurse, Latricia Bell, testified of the miracle she witnessed with baby Urias John.

“I felt such a warmth. Every hair on my body stood up. I knew that I was in the presence of God. He was right there at that moment. I looked at the monitors and there was no more seizures. That was the end of it!” she exclaimed.

Also, that night the couple asked their church and their friends and family to pray for Uriah.

“If God’s Word says we speak and we believe… Then I’m gonna speak and I’m gonna believe,” declared Jacob.

Over the next few days, Uriah’s condition greatly improved. On the sixth day, he was breathing on his own and he was cleared to go home three weeks later.

A year later, Uriah hit all his developmental milestones despite the unlikely prediction of delayed development. The neurologist said, “I’ve only had a couple other cases where people made a full recovery. And I’m just telling you he’s one of them.”

Today, Uriah is a healthy, energetic, happy little boy they prayed for.

For just $100 per month you can bring the gospel to 10,000 homes. Join us as media missionaries! GIVE NOW
VIEW COMMENTS
« A Man With A Message: Sharing God’s Word Through The Stories Of God’s People We The Kingdom Releases New Single That Declares Faith Over Fear »