How Christians Helped Bring About the Modern State of Israel
Articles 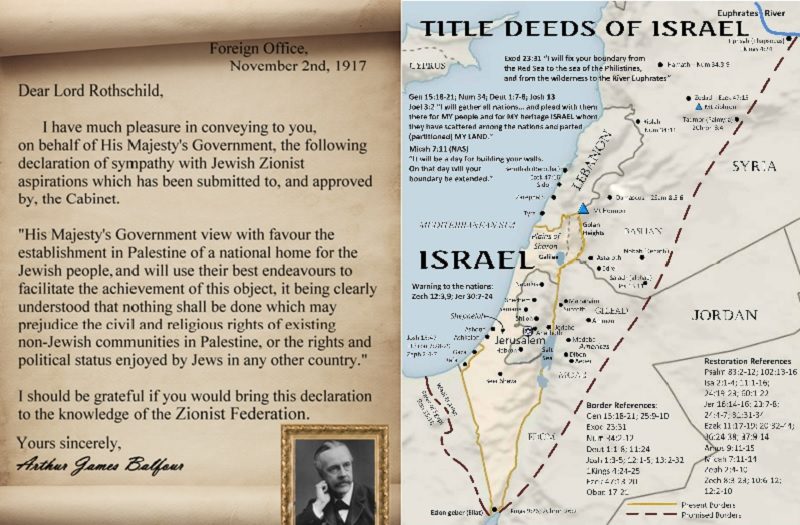 The miracle of ‘Balfour’

Two thousand years ago the original nation of Israel ceased to exist. The Romans destroyed the Jewish Temple and the Jewish people fled. However, God promised to restore their ancient homeland. Nothing happened for hundreds of years, despite numerous Bible prophecies. Then on an extraordinary day, 2 November 1917, Lord Balfour signed a historic declaration. This cleared the way for the rebirth of Israel.

The ancient prophecy of Jeremiah was beginning to come to pass….“‘For behold, the days are coming,’ says the Lord, ‘that I will bring back from captivity My people Israel and Judah… and I will cause them to return to the land that I gave to their fathers, and they shall possess it.’” (Jeremiah 30:3)

‘Balfour’ was a “declaration of sympathy with Jewish Zionist aspirations” during World War 1. It was approved by the British Government and set the wheels in motion for the modern state we know today.  Its famous words include: “His Majesty’s government view with favour the establishment in Palestine of a national home for the Jewish people, and will use their best endeavours to facilitate the achievement of this object.”

Britain was able to make the declaration because it took control of Palestine after defeating the Ottoman Turks. The declaration took the form of a letter from Arthur Balfour to Lord Walter Rothschild, leader of the Jewish Community in the UK. A former British Prime Minister, Balfour was Foreign Secretary at the time and later became Lord Balfour. He was a friend of British Zionist, Chaim Weizmann, (Israel’s First President). It was Weizmann who encouraged Balfour to support the Zionist cause.

History of the Declaration

A new understanding of Bible truth and the support of evangelical Christians provided the foundation of the Balfour Declaration. Having just celebrated the 500th Anniversary of the Reformation we know it was Martin Luther who made the Bible available to the common man. As everyday believers began to read the scriptures in the 16th Century they saw God’s promises to His ancient people and were envisioned to support the return of the Jews to their promised land.

This became a major prayer focus over the next few centuries as more and more Christians rallied to see an end to the diaspora. Furthermore, preachers like Charles Spurgeon taught on the restoration of Israel. This resulted in the increased influence of Bible-believing Christians in the government, who supported the formation of a Jewish homeland.

The founder of Zionism, Theodor Herzl, believed that only the establishment of a Jewish State could ensure the survival of the Jews. Fortunately, he was supported by a great many Christians.  While the nation of Israel was born in a day in May 1948, it was the Balfour Declaration of 1917 that was central to its inception. And, while Jewish Zionists fought long and hard to make this happen ‘Balfour’ would not have come about without the support of Christians.

The 100th Anniversary of the declaration was therefore celebrated by many Christians especially in the UK. They recognised that the Balfour Declaration officially recognised God’s End Time Plan for the Jewish people and was the forerunner of one of the greatest fulfilments of Bible prophecy. Of course, it was challenged to the core and took longer than needed to become a reality. This was because the UK stalled on its implementation. However, it was still a historic breakthrough for the Jewish people. This is why Christians and Jews came together at many events across the UK in 2017 culminating in a special celebration at the Royal Albert Hall.

Balfour 100 at the Royal Albert Hall

Balfour 100  is a UK Christian coalition established to commemorate the Balfour Declaration. They hosted a Centenary event at the Royal Albert Hall in London on November 7 bringing Jews and Christians together. Entitled Partners In This Great Enterprise, it showed how God used both Christians and Jews to bring about the return of the Jewish people from exile.

“The Balfour Declaration became the title deed for the founding of Modern Israel,” said the organisers. “God’s Hand was in every step of this partnership between Jews and Gentiles. Now we are coming together to reconnect with God’s promises to restore Israel. We will remember the role the declaration played, recognising that Britain failed to fully implement it. Furthermore, we will re-dedicate our support of Israel and the Jewish People. The Royal Albert Hall is where Lord Balfour celebrated with the Jewish community of his day and is the appropriate venue to celebrate the Centenary of the letter that bears his name”.

A reminder of our promise to support Israel.

The Balfour Declaration was only the beginning of a 31-year battle for Israel’s Independence. Sadly, the British backtracked on their commitment. This left millions of displaced Jews in concentration camps across Germany during World War II.  The Jewish humanitarian, Simon Bloomberg who was a leader at the Bergen-Belsen DP Camp after the war writes about the dilemma facing Jewish displaced persons.

“Those in Belsen could never understand why Britain, which had made possible a home for Jews in Palestine by the Balfour Declaration should now prevent them from going there,” he writes. “What hopes had these people for the future, where could they go? My sympathies were naturally with those who tried to leave Germany. How could they be otherwise? But, I also believed the national home for Jews couldn’t have come about, but for Great Britain.”

Bloomberg’s book, Life After Belsen UK launch coincided with the Balfour Centenary and captures a story of a people waiting in hope for a place they could call home. It offers a first-hand account of the survivors of Bergen-Belsen and other horror camps in Europe after World War and how the Jewish DPs refused to be resettled anywhere else but Eretz Israel.

As we remember the Balfour Declaration and the nation it finally brought about, let’s continue to support Israel. Let’s stand with the Jewish People with fresh vigour to see their homeland continue to flourish, in accordance with Bible prophecy.

For just $100 per month you can bring the gospel to 10,000 homes. Join us as media missionaries! GIVE NOW
VIEW COMMENTS
« Coming Out Of Your Desert Place Questioning Christianity… How Do You Explain God to Kids? »