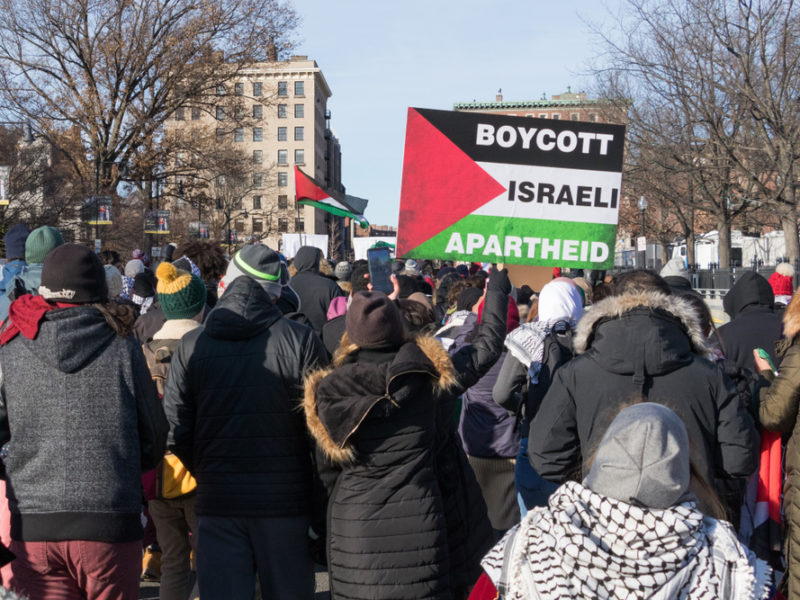 More than 70 years after the Holocaust, it’s hard to reconcile the fact that the Jewish People still face such persecution, that anti-Semitism remains a major issue and that there are organisations which exist purely to bring Israel to her knees.

One such organisation is the Boycott, Divestment, Sanctions (BDS) Movement which plots against Israel, calling for people to stop supporting companies that have ties to the Jewish State. BDS are also well known for infiltrating university campuses to incite students against Israel by describing her as an ‘Apartheid State’.

‘Israel Apartheid – We don’t buy it’ is a slogan from a New York-based anti-Israel group. It captures the essence of what BDS is all about, equating the Israeli treatment of Palestinians with the same term used for the historic injustice perpetrated by whites against blacks in South Africa. BDS also advocates the same steps the world took to end racial discrimination in South Africa – that of sanctions, or more simply put, boycotting Israeli products.

I am surprised the slogan ‘Israel Apartheid – We don’t buy it’ is used, because it has a double meaning that reveals a hidden truth. It can just as easily mean, ‘we don’t buy into that description.’

I certainly don’t believe Israel is an apartheid nation. I lived in South Africa for 20 years and saw firsthand the horrors of racial hatred under that evil system of oppression. I was part of a multiracial church when it was barely legal to hold mixed race gatherings and yet we would come together to pray for the country. I have been to Israel several times and in my experience Israel is nothing like South Africa under the dark days of the National Party.

To quote Journalist, Benjamin Pogrund: “The Arabs of Israel are full citizens. Crucially, they have the vote and Israeli Arab MPs sit in parliament. An Arab judge sits on the country’s highest court; an Arab is chief surgeon at a leading hospital; an Arab commands a brigade of the Israeli army; others head university departments. Arab and Jewish babies are born in the same delivery rooms, attended by the same doctors and nurses, and mothers recover in adjoining beds. Jews and Arabs travel on the same trains, taxis and buses. Universities, theatres, cinemas, beaches and restaurants are open to all.

“How does that compare with the old South Africa? Under apartheid, every detail of life was subject to discrimination by law. Black South Africans did not have the vote. Skin colour determined where you were born and lived, your job, your school, which bus, train, taxi and ambulance you used, which park bench, lavatory and beach, whom you could marry, and in which cemetery you were buried. Israel is not remotely like that.” (source)

This quotation appeared in an article entitled ‘Israel has many injustices. But it is not an apartheid state.’ Obviously Israel has not got everything right but it isn’t correct to compare it to South Africa’s shameful past.

The BDS Israel Movement calls for freedom, justice and equality, but exclusively for the Palestinian People. I am not denying their suffering, but I am reminding readers of the suffering of the Jewish people, especially as we remember the Holocaust. ‘Lest we forget.’

Surely the Jewish people have suffered enough, surviving centuries of persecution, pogroms and the Holocaust. Israel has fought for her existence from the day the modern State was founded in 1948. Arab nations have tried to wipe her from the face of the earth several times and miraculously she has survived. More UN Resolutions have been passed against Israel than any other nation. Could Boycott, Divestment, Sanctions be just another form of anti-Semitism (hostility to or prejudice against Jews)?

BDS may be having an increasingly negative impact as companies are forced to consider their links to Israel; products like the famous Ahava Dead Sea beauty treatments are boycotted and musicians and artists are encouraged to cancel their tours…. but, it remains to be seen what the ultimate result will be, especially if Bible-believing Christians take a stand against BDS and support Israel as Scripture requires.

“For if the Gentiles have shared in the Jews’ spiritual blessings, they owe it to the Jews to share with them their material blessings.” (Romans 15:27)

I don’t think BDS can be seen to have caused Israel’s ‘spectacular failure’ as the BDS Movement would lead you to believe. Ironically it may well bring Israel to her knees, but that is a good place for her to be, crying out to God to intervene.

In conclusion, Benjamin Pogrund considers why the apartheid accusation is pushed so much by the BDS movement. He observes that these campaigners want to see Israel declared a pariah nation, open to the world’s severest sanctions and some want to see an end of Israel completely.

“Tragically, some well-intentioned, well-meaning people in Britain and other countries are falling for the BDS line without realising what they are actually supporting,” he writes. “BDS campaigners and other critics need to be questioned: Why do they single out Israel, above all others, for a torrent of false propaganda? Why is Israel the only country in the world whose very right to existence is challenged in this way?”

For just $100 per month you can bring the gospel to 10,000 homes. Join us as media missionaries! GIVE NOW
VIEW COMMENTS
« Enjoy Life’s Journey We Need A Dunamis Revival And You Can Be Part Of It »