Bear Grylls is a Serious Thrill-Seeker; Here’s the Reason Why His Faith in Jesus is Just as Radical! 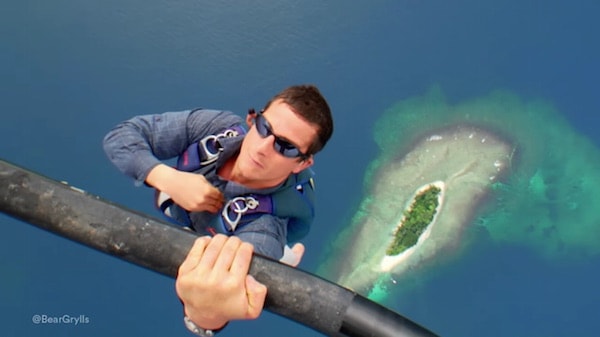 British thrill-seeker Bear Grylls, star of Man vs. Wild, has summited Mount Everest, survived a life-threatening parachuting accident in Zambia, navigated the Thames naked in a bathtub, and jet skied around the British isles. And when it comes to his faith, he approaches Jesus with the same wild abandon. He recently opened up about the evolution of his faith, preferring childlike simplicity over the complicated rituals of religion.

In a recent interview with Relevant Magazine, Bear described his childhood faith as “natural.” He explained, “As a really young kid, I never questioned God. I just knew God existed and it felt like He was my friend.”

His father, Sir Michael Grylls, a member of the Royal Yacht Squadron, fostered Bear’s curious and adventurous spirit by teaching him how to sail at a young age. While his home life was buzzing with activity and excitement, his school life was filled with religious rituals, yanking him from his intimate friendship with Jesus.

In an interview with CBN, Bear uncovered what he didn’t like about this religious fervor at school: “It was all about church-going and people telling you not to smoke behind the bike shed. I thought if this is God, maybe I’ve got the whole deal wrong, so I kind of ditched my faith.”

But Bear missed having Christ by his side on his journey through life – especially when his grandfather died. He wanted to pray, to feel God’s comfort and divine embrace, but he didn’t know how. Instead, he returned to what he knew best – he climbed a tree and cried out to his childhood friend. “Will you be that friend to me that you were at five or six when it felt natural?” he genuinely asked Jesus.

It was no more complicated than that simple prayer, and ever since then, Bear has been comforted by the return of his lifelong friend.

Returning To The Heart Of Spirituality

Looking back on his own faith journey, Bear believes that there is often a fundamental disconnection between religiosity and spirituality. According to Bear, “So often we kinda hide behind our yearning for love and acceptance with loads of complicated theological questions, and actually once that’s stripped away, what we really are is just somebody who wants to have that relationship with your Father.”

Everyone has a fundamental need for the simple truth and all-consuming love found in a relationship with Jesus. Insofar as religion fosters that relationship, it is helpful. But religion can actually serve as an obstacle. Due to his past encounters with religion, Bear finds it comforting that Jesus was “the least religious guy you’ll meet.”

Because of his intense travel schedule, Bear has sporadic church attendance. However, he grows in his faith by having impromptu worship and music sessions with his family and talking to Jesus in a simple, casual language of love. Bear explains, “I kind of cling to the simple things, like, ‘I can do all things through Christ who strengthens me’ and ‘I’m holding you by your right hand.’ The simple things is what I try to keep my faith like. Jesus is unchanging and we are forgiven.”

The Wild Ride Of Faith

Another attribute of Jesus that Bear admires is His deviation from the cultural norm. Jesus didn’t sit by and passively accept the pervasive injustices occurring during his life; he actively rebelled, leading his followers to discover divine truth, and befriending and caring for the victims of the injustices.

Jesus was not a smiley, comfortable, prim and proper rule-follower.

According to Bear, “Jesus, the heart of the Christian faith is the wildest, most radical guy you’d ever come across. He was always hanging around with the prostitutes and the tax collectors and having parties and banquets, and I found myself drawn to that character, not the kind of fluff that we like to box as religion.”

As he seeks to follow Jesus, Bear embraces this radical nature, pursuing any and all forms of adventure. To those that would call his lifestyle risky, Bear responds, “Life is risky. If we embrace it, look after each other and learn how to manage risk, we are all better off.”

Bear summarizes his approach to life and faith in this awe-inspiring way: “I for one do not want to reach the end of my life in a perfectly preserved body. I want to come flying in sideways, covered in scars, beaten up and screaming: ‘Yahoo! What a ride!’”

If you feel bogged down by religious rituals, say a simple “Hallelujah,” find Jesus in art, or go for an exhilarating run in His Creation. Mix it up a bit. After all, Jesus Himself praised simple, radical, childlike faith.