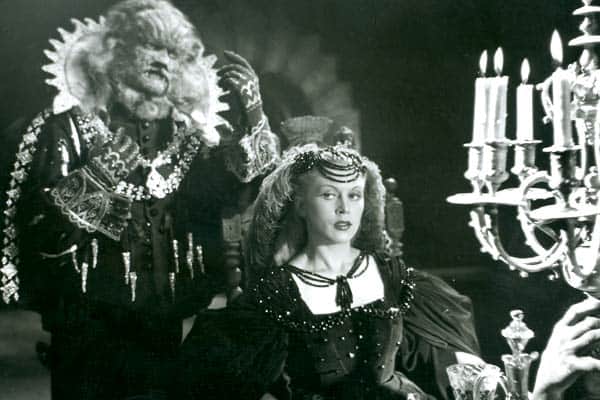 With Disney’s new live action take on Beauty and the Beast now open in cinemas, here is a look at the two definitive versions of the classic fairy tale so far committed to celluloid, each radically different from the other. Firstly, Disney’s classic 1991 animated version, and the 1946 Jean Cocteau directed monochrome masterpiece.

The former, directed by Gary Trousdale and Kirk Wise, is very well known and even got nominated for Best Picture in 1991 (to my mind it should have won). Rendered in beautiful hand-drawn 2D (which briefly showcases a then revolutionary CGI sequence), the film set a new benchmark in animation and remains the high point in the late 80s/early 90s Disney animation renaissance which also included the likes of The Lion King, The Little Mermaid, and Aladdin.

Brenda Chapman’s screenplay also expanded the story to include wonderful new characters, including the hilariously boorish Gaston, Belle’s would-be suitor. Belle herself is a more spirited, independent, bookish heroine, and there are the regulation comedy supporting characters in the form of the palace staff, now in the form of cups, teapots, candlesticks and so on as a result of the witch’s curse placed on the Prince; transformed into a Beast for his cruelty and arrogance. The central romance (amusingly referred to as “Stockholm Syndrome” by various online wags) is quite touching, especially in the way the Beast falls for who Belle really is (as demonstrated in his gift of a library) as opposed to who Gaston would like her to be.

Alan Menken’s music score is outstanding, and the songs are hugely memorable too, with highlights including “Be Our Guest” and the hilarious Gaston song (“no-one’s necks as incredibly thick as Gaston…”). All in all, it is one of the very best of Disney’s animated fairy tales.

By contrast, Jean Cocteau’s 1946 live action black and white take is surreal, sinister but also very beautiful. Also renowned for such masterpieces as Orpheus, Cocteau’s back catalogue may be catnip to cineastes like me, but his La Belle et la Bete deserves a much wider audience.

The central roles are well played by Josette Day and Jean Marais as Belle and the Beast respectively. The latter spends the majority of the film in superb prosthetics, and the lavish, surreal, massively influential production design still impresses today. Cocteau’s direction throughout is nothing less than extraordinary, especially in the dazzling transformation/flight sequences. The special effects were well ahead of their time, and although the slower pace and stylised, trippy atmosphere might not be for everyone, it is impossible to deny how visually distinctive and poignant the film remains, even today.

Both versions of the story accentuate different elements of the fairy tale. The 1991 animation allegorically speaks of spiritual curses, and of how God “opposes the proud but gives grace to the humble”. Sacrifice, death and resurrection are also key themes, and again it is easy to see why this resonates on a spiritual level. The 1946 version is subtler, but no less remarkable in portraying these themes. This version also adds a darker layer of poetic allegory. It can be read as being about the occupation and liberation of France, as though the nation were cursed as a result of Vichy government collaboration, and then liberated by heroic resistance.

Although I have yet to see the new version, I have to confess my hopes for it are not high. It appears to be the working definition of superfluous; a pointless because-we-can CGI/live action remake of the 1991 version that exists purely for commercial reasons. Of course, I could be wrong. Once I see the film, I could end up eating my words, but frankly, I doubt it. Besides, I doubt even more than it will ultimately occupy the same cinematic space as the two radically different classics I have highlighted in this piece.

For just $100 per month you can bring the gospel to 10,000 homes. Join us as media missionaries! GIVE NOW
VIEW COMMENTS
« Metacognition -Thinking About Thinking: My New Secret Weapon! The Mustard Seed: Why We GO! »