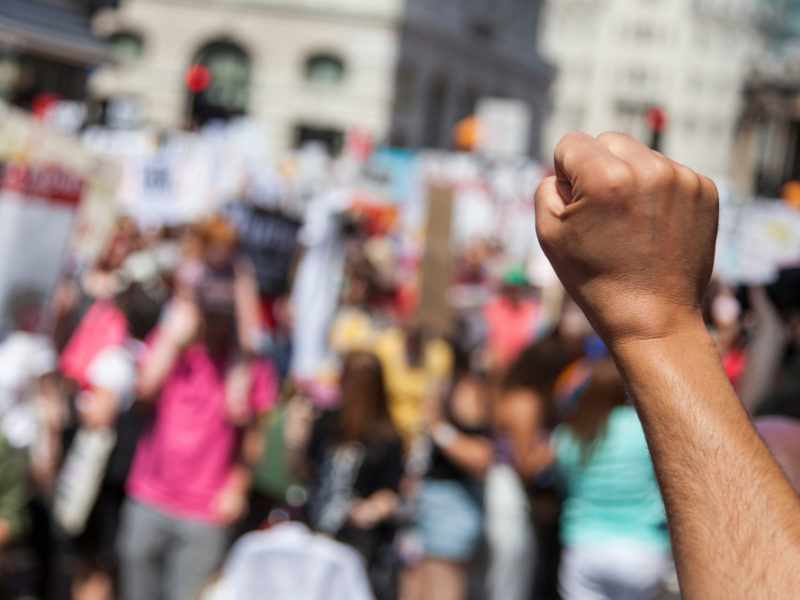 And just like that, a crowd began to form. People came from all walks of life to get a glimpse of a man called Jesus of Nazareth. We don’t know much about this crowd personally but their influence would play an incredible role in the events that would change history as we know it.

“And the crowds that went before Him and that followed Him were shouting ‘Hosanna to the Son of David. Blessed is He who comes in the name of the Lord…and the crowds said, “This is the prophet, Jesus, from Nazareth of Galilee.” (Matthew 21:9-11) The crowds celebrated His triumphal entry into Jerusalem.

For the next four days, the crowd cheered, laid their cloaks on the ground for His donkey to walk on, and celebrated Him with palm branches. Sounding familiar? The same crowd that after celebrating Jesus for four days, then quickly changed their tune as they screamed in hatred, “Crucify Him!”

This is a perfect way to understand what I call the “crowd mentality”. The same people that adoringly cheered for Jesus hatefully shouted for His execution days later. Can you even grasp that? DAYS later.

The unified loudness of the decision of a crowd doesn’t mean the truth is being served up.

You do know if one sheep goes over the edge of a dangerous cliff, the rest of the herd will blindly follow. If you asked them why they would voice their ignorance. It might sound like, “I don’t know. He did it so I did it. Everyone else was doing it!”

There is something so very lost in our current culture. It is two words – common sense.

Before you jump on the bandwagon or the latest cool thing, take a minute. No, really. Take a minute and think. Ask yourself if it’s true for starters. Just because everyone else is saying or doing it, doesn’t make it right. “Walk with the wise, and become wise, for a companion of fools suffers harm.” (Proverbs 13:20, 21)

People followed Jesus in crowds. Crowds usually come together in a public place for a specific reason. They often don’t even know each other. Think about the story of how Jesus fed the hungry crowd of 5,000! He Himself wasn’t looking for crowds; they were looking for HIM. So it was no surprise that people celebrated and adored Him upon His arrival into Jerusalem that day.

The Turn Of The Crowd

Why did they turn on Him? May I offer that hidden in the crowds were those opposed to Jesus, those who sought His undoing. They had their own agenda and used the crowd like puppeteers, getting them riled up and turning them against Jesus.

This happens in crowd mentality. Maybe the individuals would have defended Jesus if they had been by themselves or just with their own friends and family. When you realize you are vastly outnumbered and every hateful eye or fist could turn on you, it is common to just “go along with the crowd”. It is also dangerous. “Enter through the narrow gate. For wide is the gate and broad is the road that leads to destruction, and few many enter through it. But small is the gate and narrow the road that leads to life…” (Matthew 7:13,14) Thus the expression “the road less traveled”.

Our culture is inundated with the influence of others. Humans are social beings, thus the name SOCIAL MEDIA. Being a part of a trend makes us feels, well – a part of something. Others that we agree with or agree with us, reinforces the issue or belief.

We often find out way more about WHO we are when we are working through something alone and come face to face with our own true selves. I think this is essential for all of us, in order to be able to stand when the crowds start their sway or the winds of doctrine start to blow.

We all want to feel validated. We all want to be assured of our own self-worth. Remember, your worth will NEVER be determined by the cheers of the crowd. Your value will NEVER be based on applause. It is not about likes, clicks, trends, opinions, and popularity. It IS about truth.

Don’t go along with the crowd as they blindly disappear over the cliff’s edge. Hang back, and wait and see the truth that is waiting for YOU to uncover. The greatest gift you can give to yourself is to know who you are. Know what you truly believe and embrace being unmovable and unshakable in the face of the deafening roar of the crowd mentality. “You shall know the truth, and the truth shall set you FREE.” (John 8:32)

The road with the crowd is too crowded anyway.

For just $100 per month you can bring the gospel to 10,000 homes. Join us as media missionaries! GIVE NOW
VIEW COMMENTS
« Spiritually Pregnant? This Revelation Will Give You Strength Learn About The Kingdom Of God, Watch “The Kingdom At Hand” With Brian Hallam »