BREAKING
Israel-led Team Solves Mystery Why Lightning Strikes Fewer Times Over The Ocean...
Tourism In The Holy Land Is Soaring Back Up To Pre-Pandemic Highs
Lapid Speaks Directly To Palestinians—Offers Them “Another Way” Out Of The Ongoing...
Home Articles Biden, Lapid, Leaders From UAE And India Hold Virtual Summit From Jerusalem To Tackle Joint Food Security, Energy Initiatives 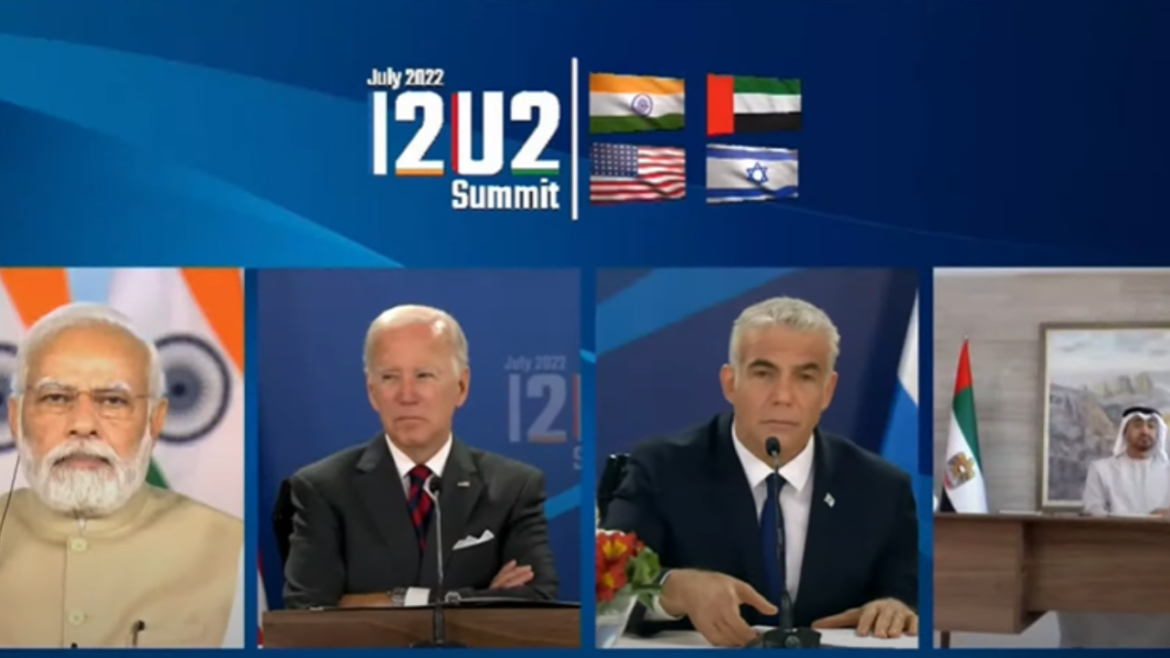 Israel Prime Minister Yair Lapid and US President Joe Biden hosted a virtual summit from Jerusalem on Thursday, along with leaders from the United Arab Emirates and India, pledging billions in support and private sector cooperation on two projects in India. The group—a new forum organized by the US called I2U2—is focused primarily on food security and clean energy projects.

Biden and Lapid were joined virtually by UAE President Mohamed bin Zayed (MBZ) and Indian Prime Minister Narendra Modi. In the public remarks before the closed-door session, the UAE announced it will invest $2 billion into “food parks” in India, and Israel and the US will provide the private sector know-how for the project. The forum also has plans to turn India into a renewable energy superstar.

The food insecurities that have resulted from the war between Russia and Ukraine (Ukraine is a “breadbasket” for Europe, Africa, as well as the Middle and the Far East) have highlighted the need for new innovative solutions and partnerships to better manage “global food shocks.”

“We need to think in new terms when it comes to energy, food security, water tech, defense, and trade,” Lapid said. “In the 21st century, challenges are local, but solutions are global.”

The UAE’s capital investment will enable the establishment of “food parks” across India, places where food can be grown utilizing green technologies to conserve fresh water, reduce food waste and take advantage of renewable energy sources, such as wind and solar. India will provide the land and help its farmers learn new ways of farming. The US and Israel will bring their private sector experts into the picture—such as those in Israel who have learned to farm in the desert!

President Biden said, “Our challenge together is to deliver real results that people can feel in their everyday lives. We can do a great deal if we stick together.”

The group has lofty aspirations. “Under the I2U2 framework, we have agreed to increase joint investment in six important areas: water, energy, transport, space, health, and food security. It is clear that both the vision and agenda of I2U2 are progressive and practical,” Indian Prime Minister Modi said.

UAE leader MBZ believes I2U2 is setting the example of a path to peace for the world. “I also hope that our quartet will be a model for those who desire peace and prosperity,” bin Zayed said.

The forum is also another demonstration of Israel’s growing acceptance among its Arab neighbors in the region and a furthering of the goodwill that started with the Abraham Accords in 2020.

The I2U2 group is also working on an energy initiative in India. They have plans to create a hybrid renewable energy project in one of the nation’s states, creating “300 megawatts of wind and solar capacity complemented by a battery energy storage system.” India aims to become a global hub for renewable energy by 2030.