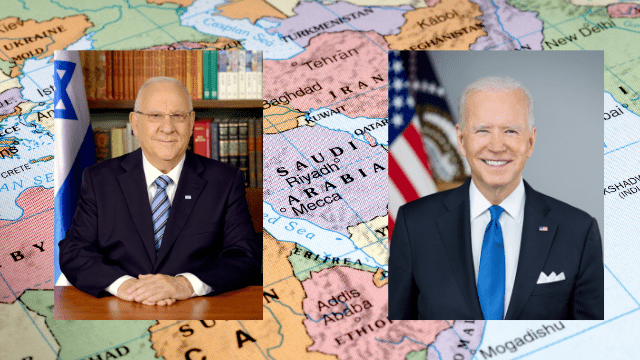 “Not on my watch,” US President Joe Biden assured Israeli President Reuben Rivlin on Monday during a meeting in the White House Oval Office, where the two discussed Iran and other situations in the Middle East. “Iran will never get a nuclear weapon on my watch,” Biden stated emphatically.

“My team and I are already working closely with the Israeli government that took office earlier this month. I am looking forward to hosting Prime Minister Bennett at the White House very soon,” Biden said. Plans are being made for Israel Prime Minister Naftali Bennett to make an official visit in July.

President Biden also stated that he has an “unwavering commitment to (Israel’s) self-defense” and that his support of Israel is “ironclad.”

Rivlin, who leaves office in a week, has now met with three US presidents and made four trips to Washington. “I am delighted to be here once again to meet the president of the United States. Israel has no greater friend or ally than the United States of America. And according to real friendship, we can, from time to time, discuss matters and even agree not to agree on everything,” Rivlin said, referring to the US possibly re-entering the failed 2015 Iran nuclear deal.

“Your declaration just now brought Israelis to understand that we have a great friend in the White House,” Rivlin said to Biden.

Of course, the real concern is not Biden’s watch, but what happens after Biden? Iran’s nuclear ambitions could be slowed, but eventually, under the agreement, they become a nuclear power. And, they are the single most destabilizing force in the Middle East, sponsoring terror through Syria, Lebanon, Gaza, and Yemen. Will that be addressed in any new deal? How can it be that you will lift sanctions and allow them to sponsor terror?

Rivlin later met with Democrat and Republican members of Congress on Capitol Hill. He also had several meetings at the United Nations, including one with the Secretary-General and then with several ambassadors, including those from the US, Russia, UK, Bahrain, and Morocco.

Not long after Rivlin had left, the UN Secretary-General Antonio Guterres on Wednesday called on the US to lift all sanctions against Iran. He also appealed to Iran to return to the parameters of the 2015 nuclear deal.

Iran has supposedly enriched uranium to 60 percent, well above the previously agreed-upon 3.67 percent and close to the 90 percent needed for weapons-grade material. Indirect negotiations continue in Vienna in an attempt to get the US back into the deal before Iran’s new president, Ebrahim Raisi, a hardliner, takes office next month.

For just $100 per month you can bring the gospel to 10,000 homes. Join us as media missionaries! GIVE NOW
VIEW COMMENTS
« A “Jaguar” To Patrol Israel Border With Gaza God’s Word For You Today: God Gives Us Exactly What We Need »