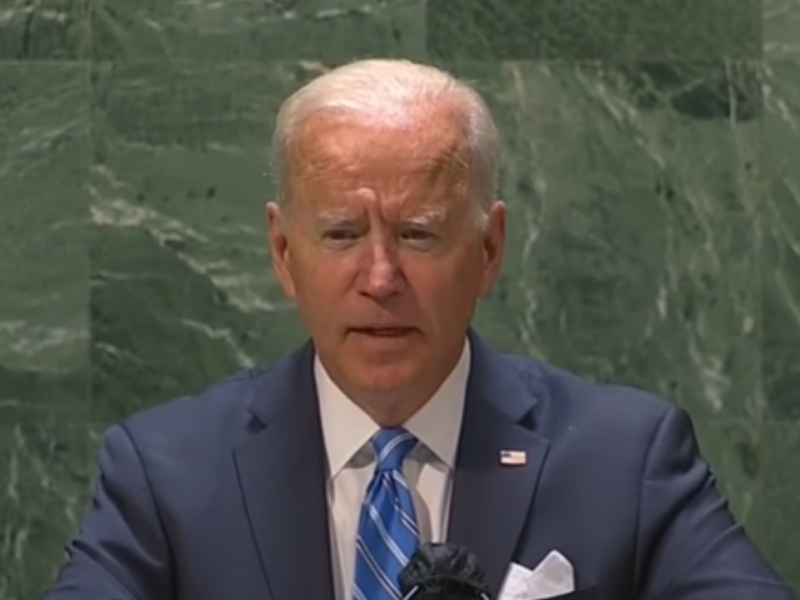 Supposedly only weeks away from achieving weapons-grade nuclear uranium, US President Joe Biden and other world leaders are leaning hard into diplomacy and returning to the failed 2015 nuclear deal. Israel, however, continues to work on a “Plan B” of its own to stop the Islamic State from getting a nuclear weapon and attempting to “wipe them off the map.”

Biden addressed the United Nations General Assembly for the first time on Tuesday and primarily focused on making the world a better place through climate control and combatting COVID-19. He also defended the US’s botched withdrawal from Afghanistan, saying, “We’ve turned the page…We’re opening a new era of relentless diplomacy.”

The US president said he is ready to re-enter the 2015 nuclear agreement with Iran if the Islamic Republic wants to. “The United States remains committed to preventing Iran from getting a nuclear weapon. We are prepared to return to full compliance if Iran does the same.”

Iran continues to insist it only wants to have a peaceful nuclear energy program, but actions speak louder than words. They have far exceeded the 3.67 percent level set forth in the deal six years ago. And according to Israeli security officials, the Republic is just a few weeks away from the point of no return—a 90 percent enrichment rate—if nothing is done to stop them.

Of course, this is a ridiculous conversation to even have. There is a story about a scorpion trying to get a ride across the creek on the back of a frog. The frog refuses his overtures, telling the scorpion, “You will sting me.” but the scorpion, through much persistence, convinces the frog that he only just wants a ride. As they get to the other side of the creek, the scorpion stings the frog. As the frog is dying, he looks at the scorpion with an expression that simply says, “why?” the scorpion replies, “I’m a scorpion.” The fact is we know that Iran’s oppressive leadership are swarming scorpions—it is their nature. Just as the scorpion was true to his nature, Iran’s leadership and Ayatollahs haven’t changed. They are Islamic fanatics intent on evil.

Israel Defense Minister Benny Gantz said he was all for the US’s approach of “putting the Iran nuclear program back in a box.” But you can’t put the genie back in the bottle or close Pandora’s box! Which is why Gantz is also urging a Plan B—the US resuming economic sanctions, which would be lifted if the nuclear deal is entered into again—and a Plan C for Israel, which would involve a military response.

Also, on Tuesday, Iran announced negotiations on re-entering the deal would start again in a few weeks (probably right after they achieve a nuclear bomb). US Secretary of State Antony Blinken and UK Foreign Secretary Liz Truss met to discuss Iran and Afghanistan at the UN General Assembly.

Iranian President Ibrahim Raisi is interested in the talks, but he is reportedly planning to show “less flexibility and demand more concessions” from Washington. On his list of demands is the ability to keep Iran’s advanced centrifuges for enriching uranium and the removal of sanctions in place because of Iran’s abysmal human rights track record and terror sponsorship throughout the Middle East. This would allow Iran to once again export oil…and fuel more terrorism.

For just $100 per month you can bring the gospel to 10,000 homes. Join us as media missionaries! GIVE NOW
VIEW COMMENTS
« God’s Word For You Today: God Is Our Armor and our shield Israel Medical Tech Company Gets FDA Approval For “Breakthrough” Infection Test »