BREAKING
Lay Aside The Old Self
Ben And Jerry’s Staying In Israel, But Founders Aren’t Doing The “Chunky...
Israel Has a New Prime Minister
Home Faith Testimony: Big Family Gets Bikes At Ridiculous Prices For Christmas

Testimony: Big Family Gets Bikes At Ridiculous Prices For Christmas 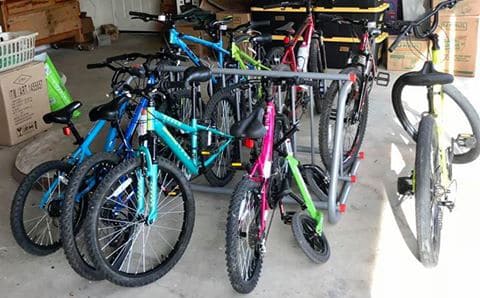 “My husband and I have eight kids ranging from two to 13 years old. My husband and I had been dreaming for years of going on bike rides with our kids, and I’d been declaring that bikes were on their way, but in the physical realm our family was in the red with a mortgage for our house we left for sale in Oregon and the rent we were paying on our house in Redding. Last year for Christmas my husband told me he wanted to get them all bikes, so I thought, OK, let’s see how this is going to happen.

My husband went to a sporting goods store that just happened to have a buy one get one free deal for bikes. He bought four nice Diamondback mountain bikes, and when he went to pay for them the cashier told them that weekend everything in the store was an additional 25% off. So we got two bikes for less than the price of two.

The next day he went back to buy four more, but they were out of stock so a store manager helped us order them online. Even though the buy one get one free deal was only valid in-store, the manager gave us an override to get two of the bikes free, and the other two 25% off, saying, “Merry Christmas.”

All the bikes arrived before Christmas except for two. One of them got lost, so the store ordered a new one for our son that we picked up a few days later. Soon after Christmas a bike got delivered on our doorstep. We called the store to let them know and to arrange returning it, but they said that they wouldn’t know what to do with it and that we should keep it!

In the end, we got nine bikes for less than the price of three! On top of that, our daughter’s bike was out of stock even online, so they sent us an upgraded bike worth much more than what we paid. My husband also surprised me with a very nice bike that cost as much as the price we paid for all the others. We now have 11 bikes, including a small one for our two-year-old.

For Christmas we had a wrapped box under the tree for each kid with a note that said, “Look in the shed,” or “Look in the garage.” My husband and father-in-law had hidden the bikes all over. It was so much fun to watch each kid open the box and run with all their siblings to discover each bike. Bikes were not even on our kids’ wish lists because they didn’t dare to dream that big. It was more fun than each of our kids had allowed themselves to dream!

The story would not be complete if I didn’t include that right after our bike purchases my husband had an investment take off, and we were able to pay off our $50,000 credit card and vehicle loan debts!”