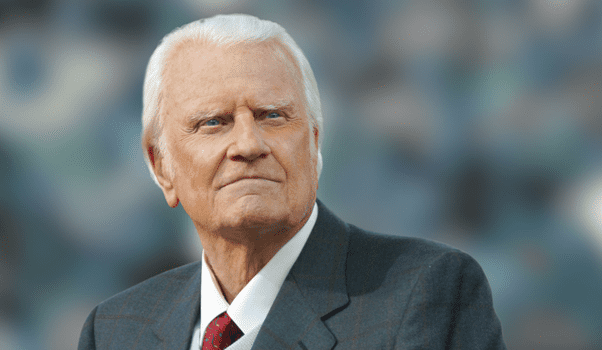 A Personal Tribute to Billy Graham

It is not easy to come to terms with the death of Billy Graham. It was not that his death was unexpected, far from it; Billy, aged ninety-nine, had suffered several ailments for many years. Indeed, in his last book, Nearing Home, he talked confidently and movingly about his impending death. Yet he had been such a major part of the Christian world for so long – I wasn’t even born when he held the first London ‘Crusade’ in 1954 – that it is hard to imagine him not being around. It is as if, visiting some familiar landscape, you find that the great tree that has always dominated it has been toppled.

You can read the details of Billy Graham’s life in the many obituaries and biographies but I would like to offer a few personal words of tribute here. As a young twenty-five-year-old evangelist I had the privilege of being invited to join him on one of his crusades – WOW! Was I blown away! And a few years ago I was privileged to have a meal with him. Despite my excitement at being in the presence of the great evangelist, I found him to be humble, attentive, warm and encouraging. Yet, directly and indirectly, he has influenced all that I am and do. Let me suggest that there were three features to his life and ministry that are worth considering and celebrating.

First, Billy Graham had a faith-filled life. The unshakeable foundation of all that Billy said and did was the God of the Bible. With that trust in God came the certainty that the Bible is God’s true word to humanity and only in Jesus Christ can we be made right with God. For Billy, faith was not simply a matter of believing truth; it was expressing that truth in life. He was – to use that now all-too-rare adjective – a godlyman. He loved God and he relied on him in all he did. That reliance on God as someone who could be trusted encouraged him to take risks.

In today’s terms, it may not seem as if Billy Graham was a risk taker, but he was. He brought the evangelistic rally into the modern technological age, he went to Russia and China in the darkest days of communism, he counselled morally compromised politicians and he even appeared on comedy programmes. In all this he put God at the centre and found, as others have, that when you do that, everything else falls into place. The secret to Billy Graham’s ministry did not lie in his many natural gifts – his height, looks, powerful voice, and sharp mind – it was the way that he saw everything as revolving around God.

This protected him from the danger of pride. There are many other perils of being a ‘professional Christian’, whether you are a global evangelist or the minister of a local church, but one of the most subtle is to let ‘the organisation’ take centre stage. Once that tail starts wagging the dog, decline or disaster will not be far away. Billy recognised that temptation and made sure that however many ventures he was involved in, God always took pre-eminence. His was a faith-filled life.

Second, Billy Graham had a faithful life. He not only believed in a God who could be relied on but he followed him without hesitation. From the age of 30 he knew that he was called to be a preacher of the gospel and for the rest of his long life he never turned aside from that call. That achievement is particularly remarkable because he faced trials and temptations that few of us can imagine. His success made him the focus of enormous attention. Theologically, there were those who attacked him for being a fundamentalist and those who attacked him for betraying the fundamentals of the faith. Politically, the uncomfortably intimate linkage between Christianity and politics in the United States meant that for years there were enormous pressures for him to get involved and to speak out for either the Left or the Right. As he became ‘America’s Pastor’, dazzling opportunities came his way. He was offered massive financial rewards for political endorsements and became the confidante and counsellor of many presidents. Richard Nixon even offered him the post of US Ambassador to Israel; Billy turned it down. Yet he stayed faithful to the One who had called him to be a preacher of the gospel. That single-minded dedication protected him; the abundant mud slung at him never stuck and while he was occasionally singed by controversy, he was never burnt by it.

Finally, Billy Graham had a fruitful life. In terms of evangelism the figures are remarkable: a lifetime audience – including radio and television broadcasts – of over two billion, and more than three million responses to his gospel invitations. Yet his influence extended beyond his meetings. Billy started Christianity Today in 1956, was influential in supporting Christian music, authored a number of books and, perhaps most significantly, trained other evangelists. God blessed his faithful servant. I likened Billy earlier to a great tree dominating a landscape. Our sadness at his passing is tempered by the fact that this tree gave rise to a multitude of saplings that now grow over the entire world. He sowed good seed and it is bearing good fruit.

In the book of Acts the apostle Paul is quoted as saying that King David ‘served God’s purpose in his own generation’ (Acts 13:36 NIV). The same can indeed be said of Billy Graham. We should not seek to imitate him (the world has changed beyond recognition since he began his ministry) but we should be inspired by him. This side of Christ’s return the Church will always need leaders and evangelists like Billy Graham.

This article was written by J. John. Visit Canon J John’s Website for more articles by this leading British communicator and evangelist including evangelistic resources.