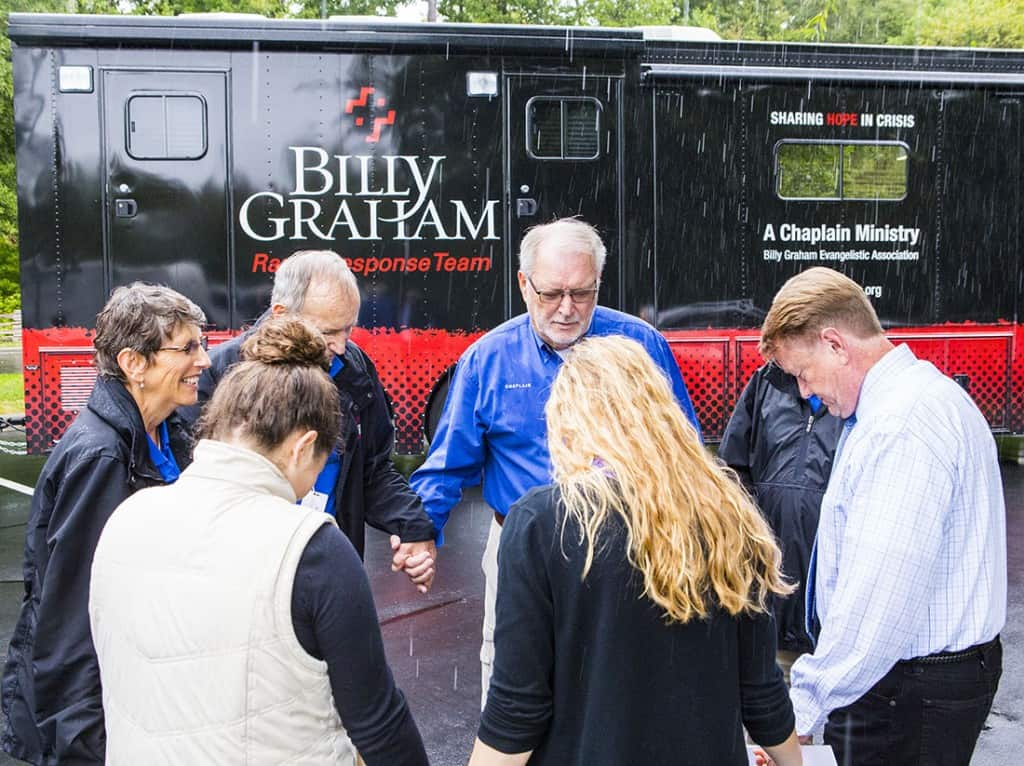 When Hurricane Dorian crashed into the Bahamas, it was a Category 5 hurricane, the strongest storm on record to hit the islands, and it left devastation, loss of life, and deep heartache in its path. In the midst of so much suffering, the Billy Graham Rapid Response Team (RRT) sent a team of crisis-trained chaplains to minister to the survivors.

RRT chaplains have prayed with more than 1,100 residents, some of whom returned to homes that had been completely destroyed and lost everything they owned. In addition to praying with survivors chaplains spend time visiting with them about their experiences and most importantly sharing the hope of Jesus.“So much destruction. So many people are hurt,” said Franklin Graham, CEO of the Billy Graham Evangelistic Association. “[The RRT chaplains] are right now with us in Samaritan’s Purse’s mobile field hospital and as our doctors and nurses are taking care of the wounds and of the sick, the chaplains are praying with people, talking with people, encouraging people; tremendous ministry. These chaplains are ministering to the entire family, in Jesus’ name.”

Through it all, many of the residents of the islands, like Jay Sands, are holding strong to their faith in God.  “Nothing catches [God] by surprise, so we have to trust and rely on Him in all things, even in disaster. He knows what He’s doing. There are some challenges, but we’re keeping the faith, keeping strong,” said the island native.

MORE THAN A HURRICANE

As is often the case when RRT chaplains respond to a natural or man-made disaster, many of the struggles people are dealing with have nothing to do with the disaster. “I just spoke with a young man who was going through a crisis before the storm of losing his mother last year and now the storm brings back the memories of her even more than ever before,” said Kevin Williams, who was the first RRT chaplain on the scene after Hurricane Dorian. “He received the love that we offered to him. He’s receiving the physical love and the love of Christ through the emotional and spiritual. He’s going away laughing and smiling and it was a blessing to see him change from a depressed position to an upright position of looking up toward the Lord.”

The RRT was developed by Franklin Graham and the Billy Graham Evangelistic Association following the attacks of Sept. 11, 2001. It has since grown into an international network of crisis-trained chaplains in the U.S., U.K., Canada and Australia who are specifically trained to deal with crisis situations. They have deployed to more than 400 disaster sites across the globe, including shootings, floods, hurricanes, wildfires and tornadoes.

For more information on the RRT ministry, including videos, photos, news articles and an interactive map of former and current deployments, visit BillyGraham.org/RRT. Updates can also be found at Facebook.com/RRTChaplains.