BREAKING
Bennett Coalition Government Collapses, New Elections On Horizon—And The Return Of Netanyahu?
Rooftop “Glamping” Pops Up In Israel
“Steph Curry Is Copying Me… Again…With A Hebrew Sweatshirt”
STAND WITH UKRAINE
Home Articles We Thank God for the Life of Evangelist Billy Graham

We Thank God for the Life of Evangelist Billy Graham 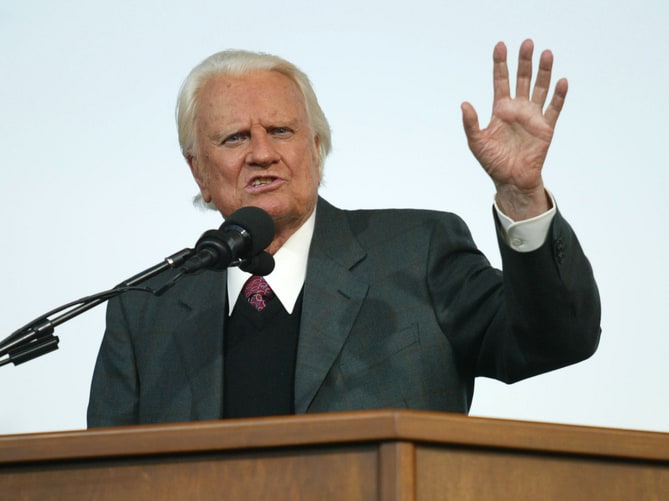 Today, February 21, the man known as, America’s Pastor, passed from this life into eternity. William Franklin Graham, known to everyone as Billy Graham, was an internationally recognized preacher of the Gospel of Jesus Christ who was always sowing Gospel seeds.

The above video, Sowing Seeds The Seeds Of The Gospel captures some of Dr Graham’s passion for souls which continues today through the global ministry of the Billy Graham Evangelistic Association, (BGEA).

Over many years of watching and listening to Dr Graham, I became aware of something that characterised his services. He always called the listener to a point of decision. This is something that challenges young evangelists today. May Dr Graham’s legacy inspire a multitude of new evangelists to rise up for the sake of the Gospel, and like Billy Graham, never give up.

As a young evangelist Billy Graham conducted crusades in the Los Angeles area and garnered the attention of William Randolph Hearst who owned a newspaper empire. It is said that Hearst put out the challenge to his editors to make Billy Graham a known figure in America. However we know differently, it was the call of God upon his life that took him to many countries, enabling him to speak to millions of people.

At one point Dr Graham’s radio program, The Hour of Decision was heard on 1,200 radio stations.  Some years later the ministry expanded into television. Graham’s popularity continued to grow and he is to be commended as a televangelist whose name was never muddied. He had a simple policy to never meet alone with a woman other than his wife and immediate family. This is a policy that many ministers have adopted for themselves over the years.

Billy Graham’s style of preaching and calling people to repentance was as skilled as any boxer who entered the ring. He garnered a gift that only the Holy Spirit empowers.

Billy Graham has passed from this life at the age of 99 and will be greatly missed, but we all can look forward to that time of seeing Billy once again and rejoicing with the multitudes who are in Heaven due to his obedience. In his words, “Come forward now. Make your way to the front of this platform and say yes to the Lord.”